Wanna create an easy pumpkin centerpiece that requires minimal skill (you gotta be able to lift and shift a pumpkin….so stretch if you must) and is beautiful?!  I’m here.  Your personal pumpkin trainer of sorts.  Let’s go.  Remember to breathe 🙂 I used for my centerpiece the following… 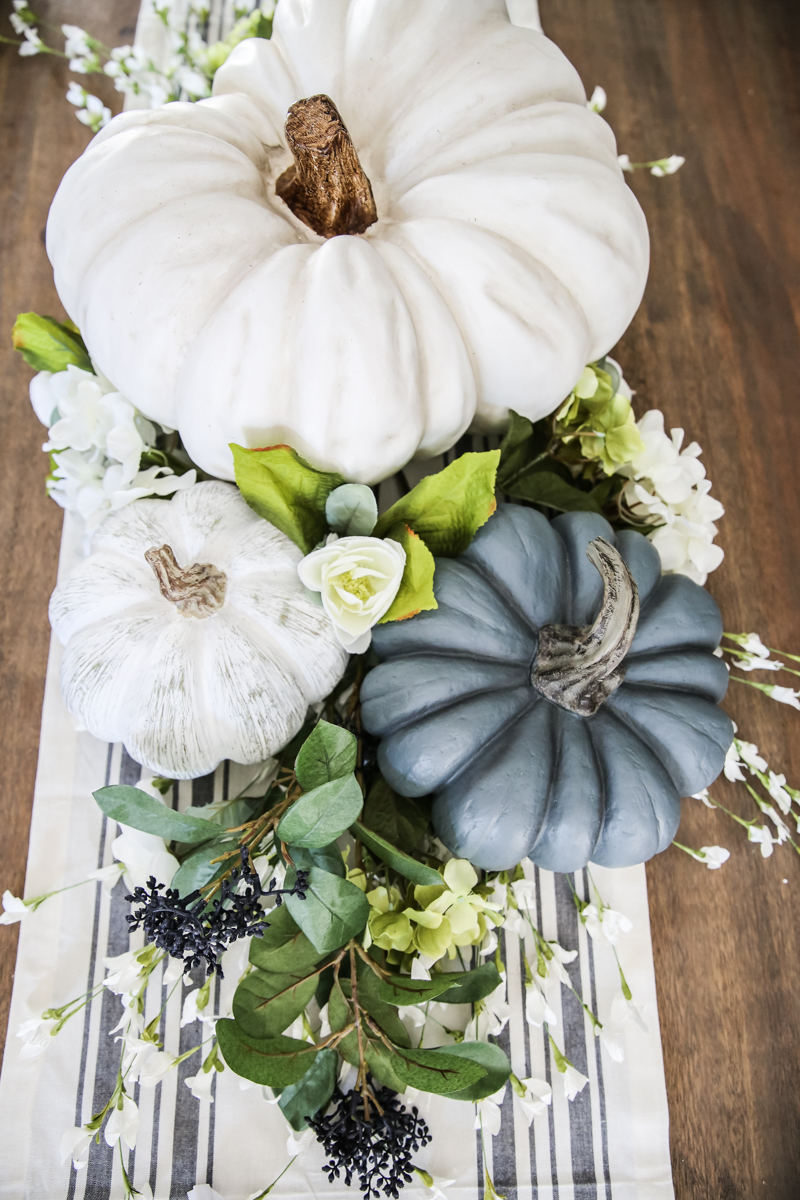 For the first step of assembly, lay out the runner.  Make sure that it will coordinate with the pumpkins and flowers.  Then lay the paper flower sprays out in the center of the table with the flowers pointing in opposite directions.  You may have to spread out the stems to create a pretty look. 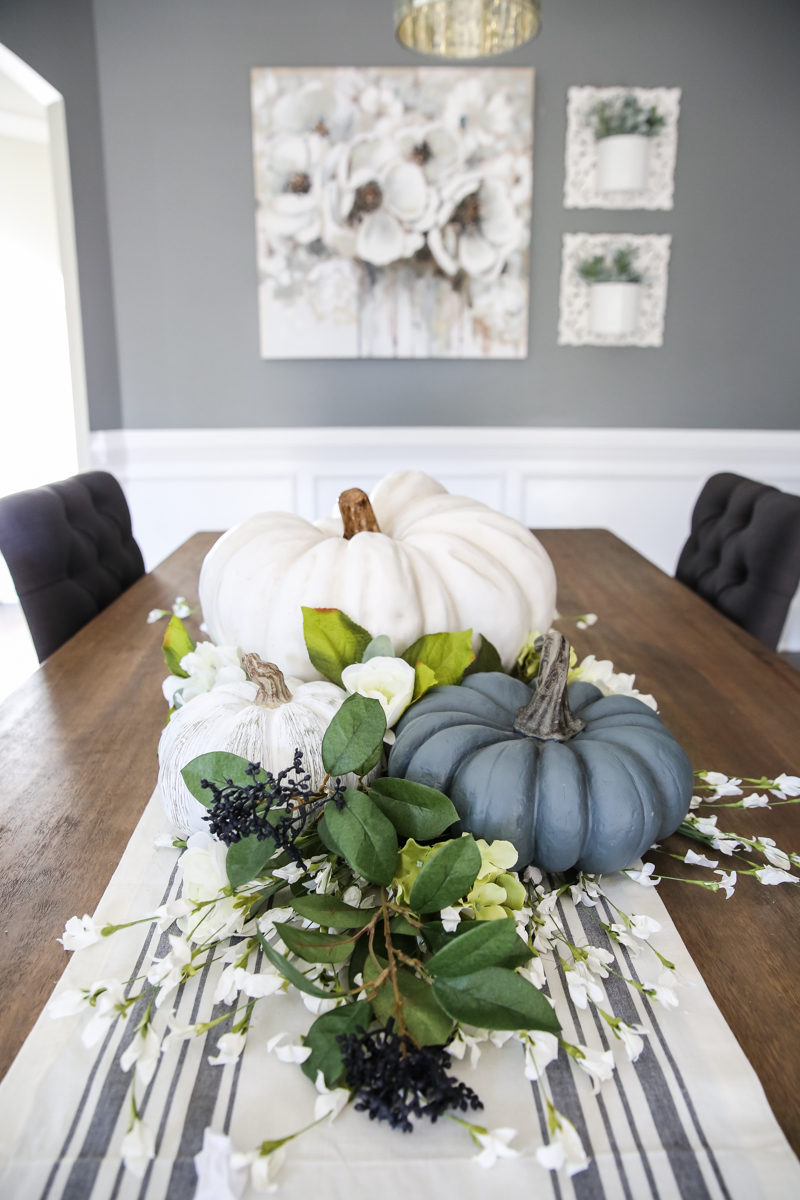 STEP 3 – Include the Pumpkins

All three pumpkins should be placed in the center of the table directly on the flower sprays. Make sure to put the smallest pumpkin in the front so it looks like it’s in a triangle formation.  The key here is to gather them in an organic and natural looking way. Sometimes the smaller pumpkins have a hard time sitting on the stems and being still.  This actually applies to children and pumpkins.  In both cases, don’t freak out….just move the pumpkin to a more stable and comfortable spot.  This also works with kids too 🙂 Using the longest berry stem….stick them in the gap between the pumpkins. See the dark colored berry sprays?  They will fill the voids between the pumpkins and make the entire thing appear more full. 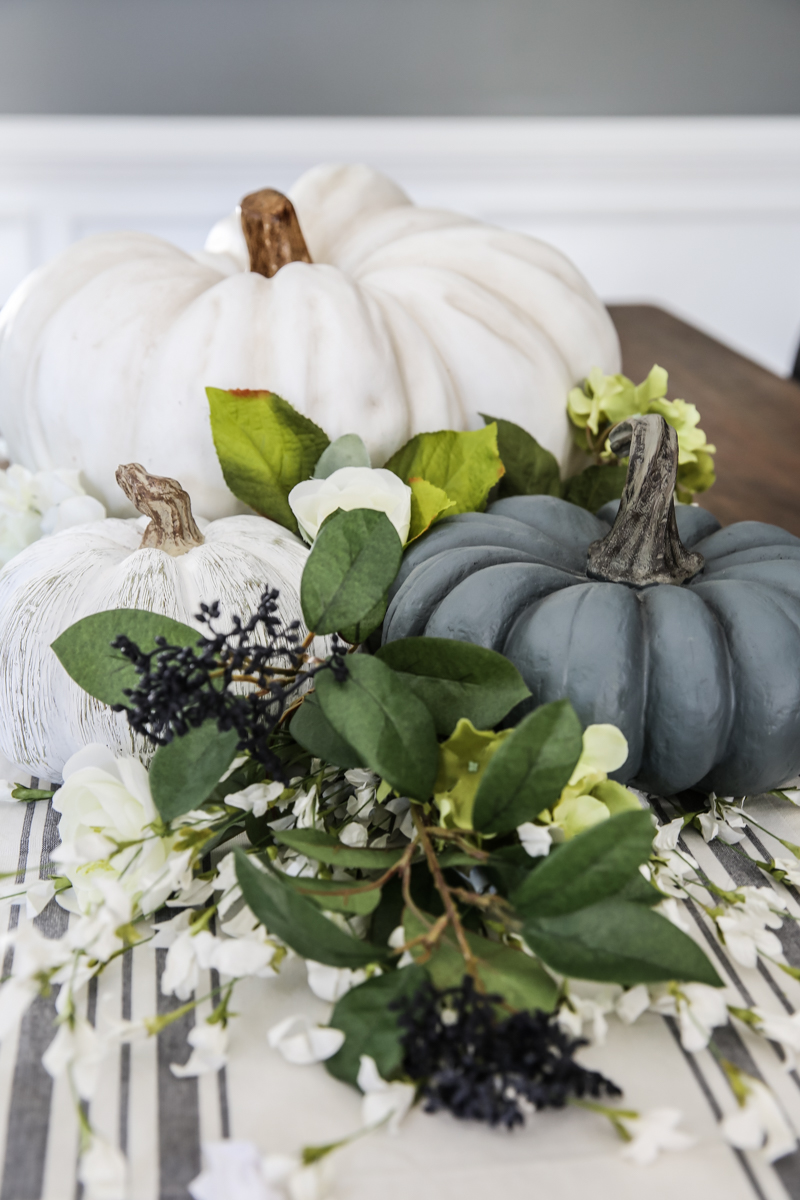 Then it is time for the shorter hydrangea picks and flower picks.  All of the spaces you see that need a little filling – just stick it in. The hydrangeas I got at Walmart, the pumpkins are from TJMaxx and the runner is from World Market. I think that the biggest impact is the flowers.  I love using flowers for centerpieces….it’s just the easiest and cheapest bang for your buck. I love this thing.  And even though Georgia is going through a heat wave  – I still felt like a pumpkin on the table made the air just a smidge crisper and cooler 🙂  Way to go pumpkins! And to all of you pumpkin lifters – way to go!  You did it!  You are done.  Now go eat some spinach dipped in water.  Good job y’all 🙂