This past Saturday was the much anticipated baby shower for my good friend Brook.
Yes…now I am totally pooped. I seriously need a nap…for days. But wait! I’m not so pooped that I can’t share the fantastic fun! Are you ready!?! Are you pumped?!?! If you are going into labor in anticipation, that’s exactly where I want ya! Let’s go over each and every detail of the festivus for the uterus! And let’s throw in exclamation points whenever possible!!!
So you are officially invited to Brook’s Bambino Blast… 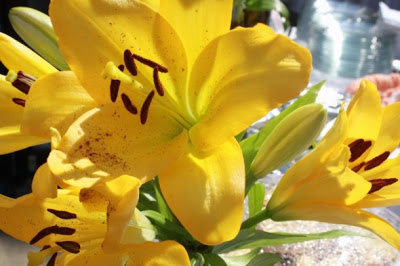 The theme was driven by the lovely lilies that I found on super-discounted sale at a local farmer’s market. Lilley is one of the names that Brook & Kent are considering for their baby girl. Since they are having such a hard time nailing down a moniker for the little monkey, I thought it would be perfect to have the theme be NAMES.
The shower was held outside on the back patio of our church. It was plenty big enough for us to fit the food buffet, the gift table, the seating area to eat lunch, the candy bar, and the various other tables that we used. The weather was perfect although sometimes we had random gusts of wind. The picture above is the scene that greeted friends when they first entered the patio. Two tall tables held appetizers and name tags for the guests. Each name tag had the person’s name, the origin of their name and the meaning. (enter theme points here) The children that attended really enjoyed learning what their name meant and loved seeing that their name was special and different from their friends. A small Ikea frame on a mirror held a message for all the guests. Yep, that is Brook’s baby belly – from one of our photo shoots – and it looks just darling as it personalizes the quick note. Best part about this detail is that I didn’t have to be standing there greeting each visitor as they arrived. Since so much had to be done, it bought me some very valuable time. Each table was adorned with a white to-the-floor tablecloth and topped with a 52″ square pink, green and yellow tablecloth to add some pops of color and tie all the (many) tables together. The centerpieces were large vases filled with limes and yellow lilies placed on mirrors. Smaller vases held more limes. Let’s just say limes were everywhere 🙂

One of the details that fell through the cracks were the chairs – originally the plan was to rent white chairs from a local rental facility. However, they closed early on Friday and opened late on Saturday – so we used the churches chairs instead. I know aesthetically it would have looked better with white ones, but heck, if something had to fail, I am glad it was that cause we had a backup plan. Whew! Seating tables also had small Ikea pitchers with various beverages. Floating lemon slices added a bit of southern flare. Dontcha just love the look of the color combo?!? I love how they coordinate with the invitations and Brook’s Pottery Barn bedding.

THE FOOD: Brook is a health nut and loves fruits and veggies, so I attempted to incorporate lots and lots into the menu. Crostini’s topped with blue cheese and walnut spread with a slice of pear. Caprese minis. I am Italian…by heritage and by taste buds…so this one was my personal input into the appetizers. Made of mozzarella balls and cherry tomatoes, the easy to eat appetizers were very popular. We also served spinach dip with crackers for those with less brave appetites (aka kids). Brook and my mom are hanging out with the apps waiting for everyone to arrive. We set the buffet to be easy and fun to serve yourself a big portion of the flava-flav. Shrimp cocktail, fresh fruit salad, and what I like to call ‘nutty’ salad were all ready to go after the blessing. The chaffing dishes held the mixed veggies and were located at the end of the buffet next to the chicken salad in croissant sandwiches and the ‘katie-dids’. What is a ‘katie-did’? Oh just a little something I invented. It is a butter biscuit with craisins rolled in. Then stuffed with thin sliced turkey, Havarti cheese and served with spicy mustard and cranberry sauce on the side. It was more an accidental invention to be honest. But even my boyfriend loves them (he warms em up) so I can definitely see them being a staple for parties to come! The beverage table was loaded with tons of glasses, lemonade, unsweet tea for those Atkins-lovas, cran-rasp-lem-lime punch, water and of course, sweet tea (cause we are in the south!!!) Little tags adorning each pitcher let all the guests know exactly what they were getting into. And small tin buckets held the artificial sweetener and of course, a lime was floating around the table. I barely got a shot of the ‘sweetie pies’ as they were whisked out the door. We asked if each guest wanted one – ten hands shot up. As the plates with the pies, ice cream and a strawberry were delivered, all the others were slowly added to the list to receive their own. I guess the ladie
s decided they weren’t THAT full 🙂 And of course the candy buffet was a hit! Especially with the kids – one little girl filled her bag all the way to the brim – and she was even allergic to nuts! I am still trying to figure out how she did that! Probably those little scoops helped out, huh?!?

THE GAMES: We played two games – to go along with the ‘name’ theme. One game was ‘guess the meaning of the names in the Suter family’. And the other was ‘guess the names of the characters’. Brook is about to become VERY familiar with all things baby – including each Disney, TV, cartoon and animated character so I thought this would be good for her baby education as well. Let’s face it, it is more important to your two year old to know who Thomas the train is, than well, their grandparents. Not surprisingly, a child won this one! THE PRESENTS: The other activity guests could participate in while visiting with the pregnant lady was to visit the center table that held a dogwood tree. There is a legend about dogwoods that goes a little something like this: Long ago, dogwoods grew straight, strong and tall. Jesus was said to be crucified on a dogwood and after he died, the species changed into a gnarly sort, so that no person could be crucified on one again. The flowers bloom in spring (Easter is when Jesus was resurrected) and each blossom is white as snow (representing a clean heart) and dots of red (drops of Jesus’ blood). It represents the forgiveness that we have because of His love and sacrifice. Being a pastor’s wife, I thought it would be the perfect tree to give Brook. We wrote notes of encouragement, prayers, blessings and well wishes on tags then fastened to the branches. When Baby Suter is born, they can plant it in their yard to commemorate the celebration of their child’s birth and the hope that their little one will grow to appreciate how much God loves her. And every time they see it, they can remember those friends who are praying for their baby girl. It made me so happy to see Brook’s gift table loaded with tons of pressies. I missed most of the opening so I will have to go by later this week to ask her what she got. These little girls were ‘helpers’ as she unwrapped. I only wish I could wear pink polka dot pants with pink crocs, a leopard headband and a fun top…oh to be 6 again!

THE THANK YOU was way more than I expected. She got me a uber-cool bracelet made of real wood (totally my style) and a west elm chain link frame. I can’t wait to put a photo from the shower in there! The best part about my hostess gift was the homemade note. In it, she thanked me for the fabulous shower even though it hadn’t happened yet. I was so flattered, I wanted to throw her another one. How many do you think I could fit in between now and her due date? She is due in one week. I could totally do like two more at least, right?!