I know I am supposed to be blogging about my New Year’s resolution.  or a recap of my favorite 2010 events.  or doing a wrapup of my top referers, my top blog posts, or my top reads.  But I am nothing if not rebellious.  It must be the homeschooler in me 🙂

Anyhoo…before I divulge all that year-changing-goodness, I wanted to share with you one kick-asphalt before and after.

It is brought to you in part by my boyfriend’s hardworking (andfinelookin) bootie, in part by his wallet-snatching wife, and in big part by the fine folks at True Value.  Holla! Okay…are you ready for this?  Seriously?  Because if you aren’t sitting down, you probably should.  And you should have nothing behind your head that is shard-like…because your head might get thrown back.  And you also should have a pillow on your lap while you are sitting down…because when your jaw hits your crotch…well, it might hurt a little. Not to toot my own horn…but DANG GINA!  That is one fiiiine lookin makeover!

And you wanna know the best part?  It only took us three years, 11 months and a smackle of days to finish 🙂  No but really, this thing has been a work in progress since day one.  And I am happy to announce that it is finally complete.

It started off pretty rough.  Black painted treads and risers, no drywall, and no flooring was where we began.  Here are a couple of pictures from LONG ago…back from before we had drywall in the basement bedroom blocking the view of the stairs: 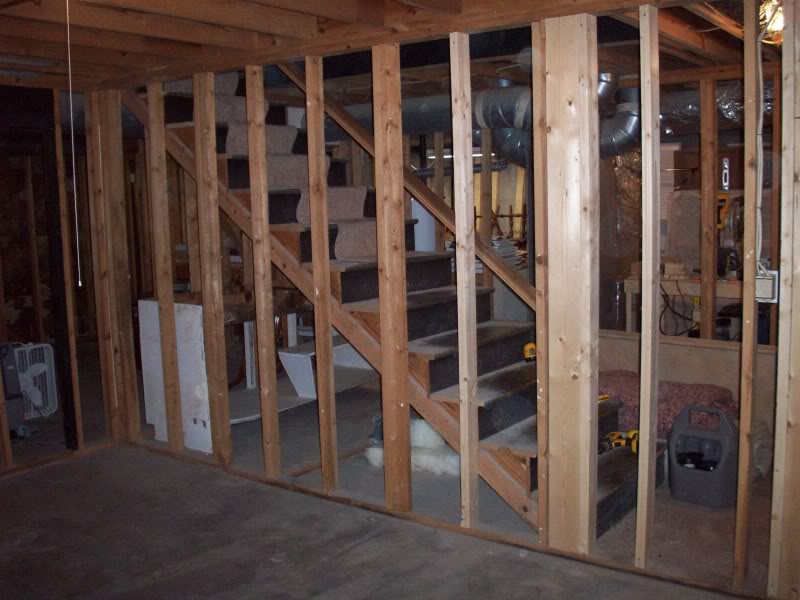 You can see that this was also before our big basement renovation. That bigger scale renovation started about a year ago…when we brought in lots of insulation, loads of drywall, a ton of enginneered hardwood flooring and buckets of paint…all to bring the basement into a functional and suitable place for guests.

It was then that we actually began on this space as well.  The first thing we did was remove each tread and riser from the stairs.  Then Jeremy (and his buddy Jade) slipped some drywall onto the studs.  (sorry about the down-the-stairs-viewpoint but there wasn’t another way to actually get down the stairs when they took them out.  the boys were able to scale just those little steps…but I was way too chicken to try it.) Okay…back to the normal view.

So after they put the drywall up…and the stair supports were back in order, they had this genius idea to just flip everything over.  That way the unpainted, non-jacked up side was showing instead of the black-painted-hot-mess that was there before.

After that, Jeremy built what I referred to the wall-n-a-half….which was as the name suggests, was a wall, then a half. Here’s a better picture of the end result. In the end, we did have to replace one riser and tread…because they were too damaged to use.  But that was okay…because one tread is a lot cheaper than a dozen.

Jeremy (and his pop – Pastor Dad) used a power sander to get rid of the black paint leftovers on the edge of each step and to smooth them out.  This was when I started believing that these things would actually look good.  Yes honey…I told you that I knew that they would turn out like new before…but I was sortof lying a little….I doubted. The boys left it up to me to get the little rounded corners sanded down. Then came stain.  At first we used the Mahagony Gloss…but apparently I didn’t stir it enough during each application…and we ended up with checkerboard steps.  User error 🙂

Let me tell you what happened.  Jeremy works in the basement…his office is down there.  And so he has to be able to access the space EVERY day.  Even weekends.  Just in case.  So pullin’ on my smarty pants, I decided that we would stain only every other step…making it possible for Jer-bear to walk down there.  I started staining.  Between each coat of poly-stain I would sand with high grit sandpaper.  Three coats later I thought it was time to switch.  So I started staining the other-every-other-steps.  That is when I discovered that the first set was this wonderful ashy brown…and the second set was a red mahagony.  Totally different colors.  Each with three coats from the same can of polystain. I literally cried.  I felt like the world was crumbling around me.  This was while Jeremy was making wonderful progress of my doodles on the napkin about the half-wall-railing. 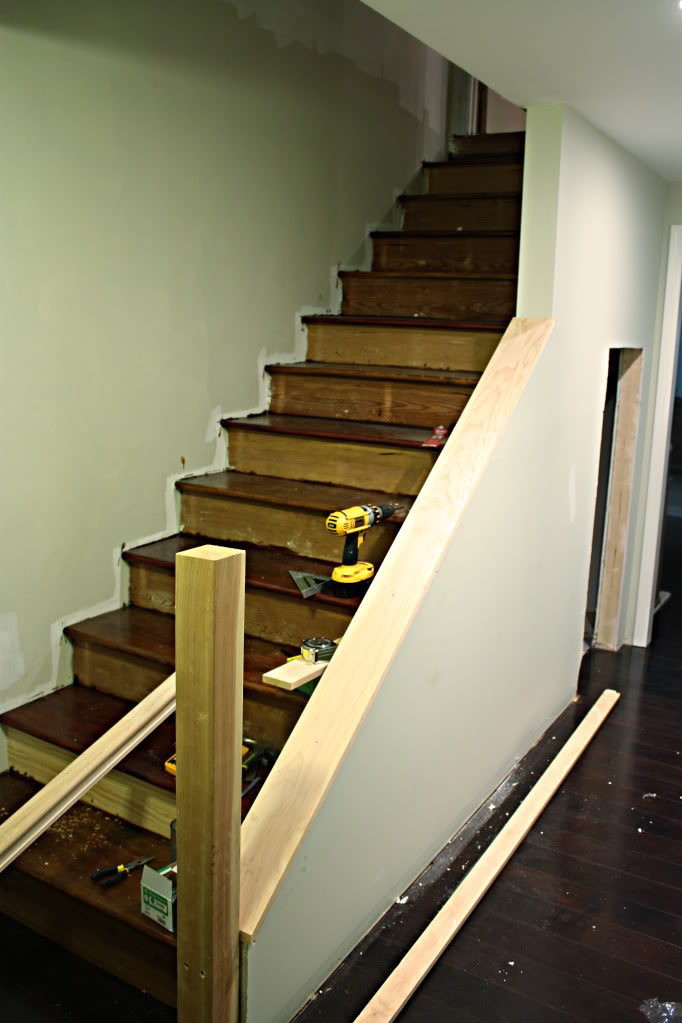 Back to True Value we went.  That is where I got the Black Poly Stain.  1 coat later…we have stair treads that match the flooring prettydarnwell. After that we just simply painted the walls. I like it.  Oh and we even added a little doorway to the storage space under the stairs.  It holds my ‘stuff’.  You guys always ask where I put that…it’s under the steps.  like Harry Potter before he knew he was magical. So how bout it?  Better than my favorite books of 2010, right?  I mean…I didn’t actually read an entire book in 2010…unless you count that breastfeeding pamphlet they hand out in the hospital.  Which still is under my pillow for emergencies.

Anyhoo…that is my favorite makeover of the year…and it wraps up our True Value stint.  Whew!  Just in time for a little renovation break…at least two weeks till we start brainstorming how we can switch things up in the new house.  Hope you had a wonderful and safe New Year’s!