I can’t believe how fast this past year flew by and over the weekend we got to celebrate the ‘mane’ man with a carnival style party.  You may be wondering how we pick the birthday party themes….well, Will was pretty easy.  For his first birthday we went with a farmyard theme because his favorite thing to do was ride around on ‘the tractor’ (aka our riding lawn mower).  For Weston, his little trademark was the mustache paci so we did a little mustache bash.  And for LJ, the only two things we know about him is that his name means “brave as a lion” and that he is super sweet.  I contemplated doing a safari theme to work the lion aspect but then switched to a carnival theme after thinking about how fun it would be to have my sweet little feline be the ‘mane’ event. I whipped the invites up in photoshop and email them out.  It’s easier and cheaper than sending out real paper ones.  I do print out one version for the baby book though 🙂

The set up was fairly simple.  We decided to do it out on the deck this time (our first time allowing people out there!) and it was fabulous. 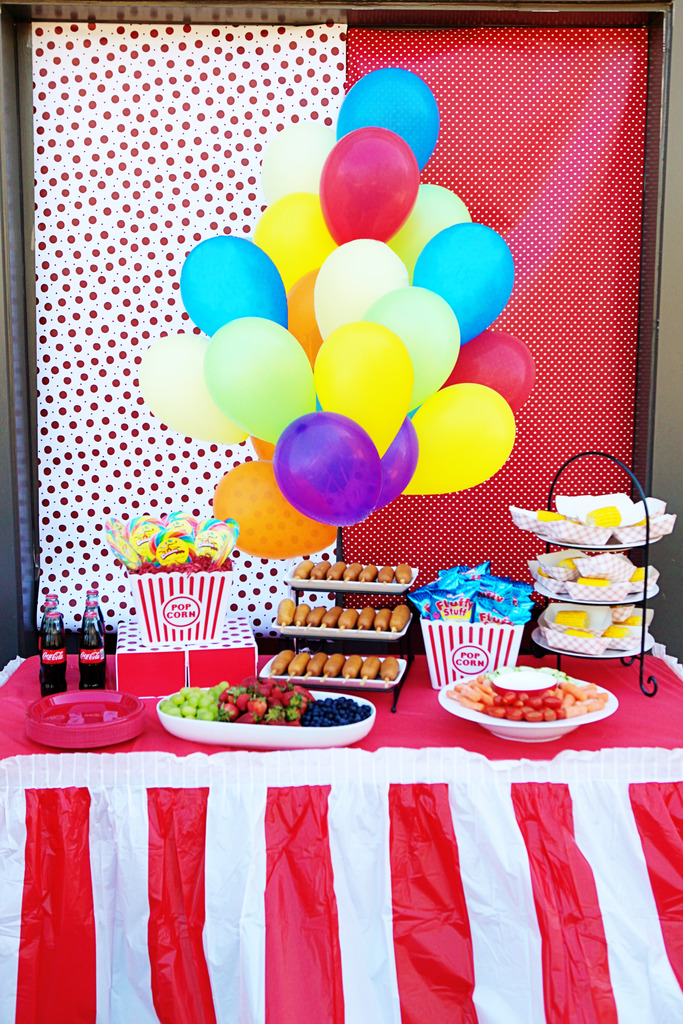 I got all the decorations on Amazon and the Dollar Tree.  It was a really easy thing to do (I guess carnival themes are popular).  Our menu was pretty much all finger foods…corndogs, corn on the cob, veggies, fruit and of course the treats. I figured that since adults would probably be the majority of guests that they would appreciate more healthy options so I made the fruit and veggie trays the night before the party. This is LJ’s favorites….grapes and strawberries and blueberries.  I would probably say that last one is his absolute favorite.  He is a piglet when it comes to the little blueberries and will scream if Weston tries to steal them 🙂 The treat and favor table was super simple….I simply draped some scrap fabric (sorry it’s wrinkled…the kids kept trying to get to the M&M’s!) and popped everything down. I saw some clown cupcakes on Pinterest and they were super simple to make.  I used a red M&M for the nose and bought the eyes at Walmart.  The cupcake liners are really old so I don’t remember where I bought them.  All the kids loved the cones and the funfetti cake mix. For LJ’s smash cake, I made a big top cake.  (yes the icing was melting in the kitchen!) and used my first ever silicone cake pan.  It was really fun and I can’t wait to use it again! I got the candles at the Dollar Tree and I think they are so cute. For the decorations, I decided to use the carnival lollipops that also doubled as favors.  I put some floral foam down in the bottom of the Dollar Tree popcorn boxes and then stuffed tissue paper around it to keep it in place.  The lollipops went straight in and then I covered everything else with the crinkle paper.  It was super fast and easy. Along with the lollipops, I made little favor packages for each kid.  The skinny plastic popcorn containers were also at the Dollar Tree and then I put in Animal stickers…it had a giant lion on the front!!!….and a silly straw and a couple other pieces of candy inside.  Each favor cost about $3.25 which is a bit more than I normally spend on favors but I thought they were well worth it and all the kids loved them! Weston after he was caught with his hand in the M&M’s.  This kid. Outside we set up the bouncy house and a little face painting/balloon animal station.  The bouncy house was actually rented by our neighbors for their daughters birthday party the day before and they had an extra day for free so they told us that they would bring it over if we took it back to the rental company for them.  DEAL!  It was the hit of the party and I am so thankful that we have such great neighbors! My mom came to the party!!!  And she brought her clown stuff so that she could be “Pinky” and it was hilarious.  She answered the doorbell and scared half the kids and thrilled the other half.  By the end, it was a huge hit though 🙂 Plus, she did all the face painting and it helped put all the little ones in the party spirit. Funny story…I walked over when she was doing this Seattle Seahawk and was out of my mind impressed with her.  I praised profusely saying that it was the best paint job ever and then I said….How did you know exactly what that should look like?!  And she said with the straightest face…”Katie….he has a picture on the phone.”  Duh. Clay is a little flower child 🙂 I was really thankful to her for being so willing to entertain the children.  I can’t wait to tell LJ when he is older that Nana was a very special guest at his first birthday party 🙂 The other thing I absolutely need to tell you about is the smash cake.  The sun started going down and it started getting a bit nippy out there so we did this part inside and LJ was the cutest thing ever. After singing, he tried the icing and then, he started sticking out his tongue.  Everyone started laughing and we thought he was gonna just lick the cake clean…. Until this happened.  It was amazing.  My boys are constantly surprising me and this was a huge one because this little dude is rarely aggressive about anything.  In fact, if I would have guessed, this would be more Weston’s personality than LJ’s….but Weston cried at his cake smash and LJ just went for it. Overall, it was such a sweet day to celebrate my little Mama’s boy and I am excited to see what year two brings!  So far, he is my late-bloomer when it comes to walking (he hasn’t taken his first steps yet) so the next twelve months will definitely be full of bumps and bruises and new adventures!

Happy Birthday my precious Leonard Judah.  Mommy and Daddy love you more than you will ever know!  LJ, you are our gentle little joy and our sweetie pie and we can’t wait to celebrate you again!