I shared a super easy craft on InstaStories and since I’m nervous that one day Instagram will decide to take everything away, I thought it would be best to share it here too!  This is the easy DIY yarn garland tutorial that is slightly tedious but strangely satisfying!  And needless to say…completely adorable 🙂 This yarn garland is meant for home decor but it would be cute as a scarf too! Let’s just start this easy craft because I have a feeling that you will become as addicted as I am! 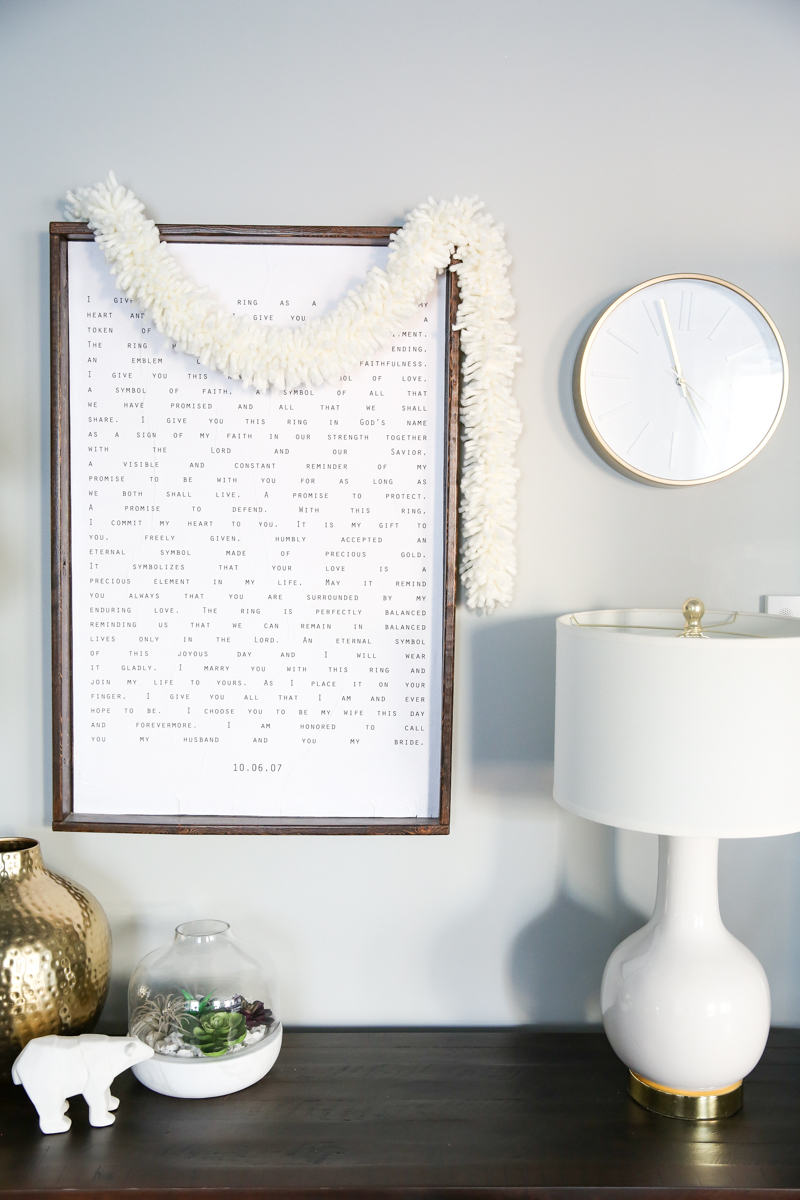 This is a super simple craft and you will need the following:

Note that one ball of this yarn is 43 yards and it makes a 3 foot garland. It’s time to cut the yarn.  This is the most tedious part of the garland.  It took me roughly ten to fifteen minutes to cut an entire ball.  I cut them roughly three inches long but its not really important if they are exact or even close.  I had some that were only an 1.5 inches and some at four inches. The fastest way for me to cut the yarn was to do the wrap and cut method.

I would hold the end of the yarn down with my thumb and then start wrapping it around my hand. 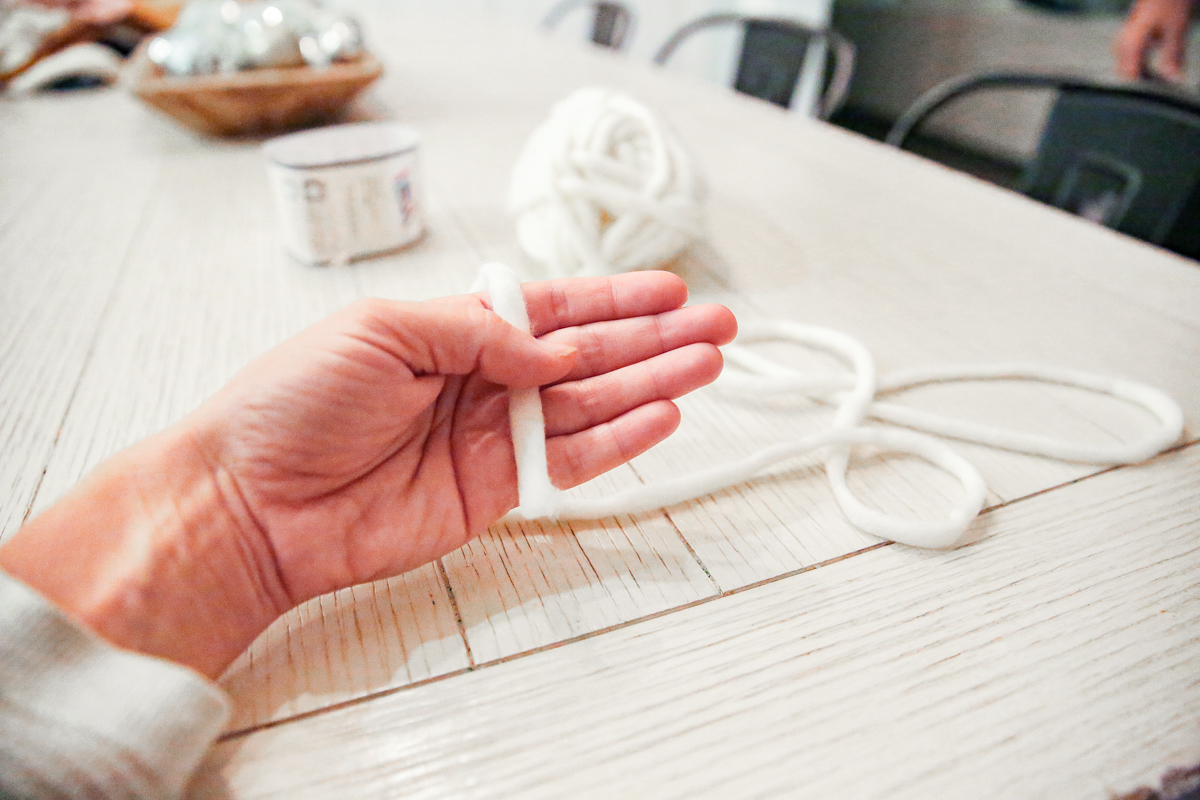 I would wrap it around rather loosely.  If it was too tight then it made cutting hard. I wrapped it probably about fifteen times. And then I slipped the scissors between my forefinger and the yarn and cut the whole lot. 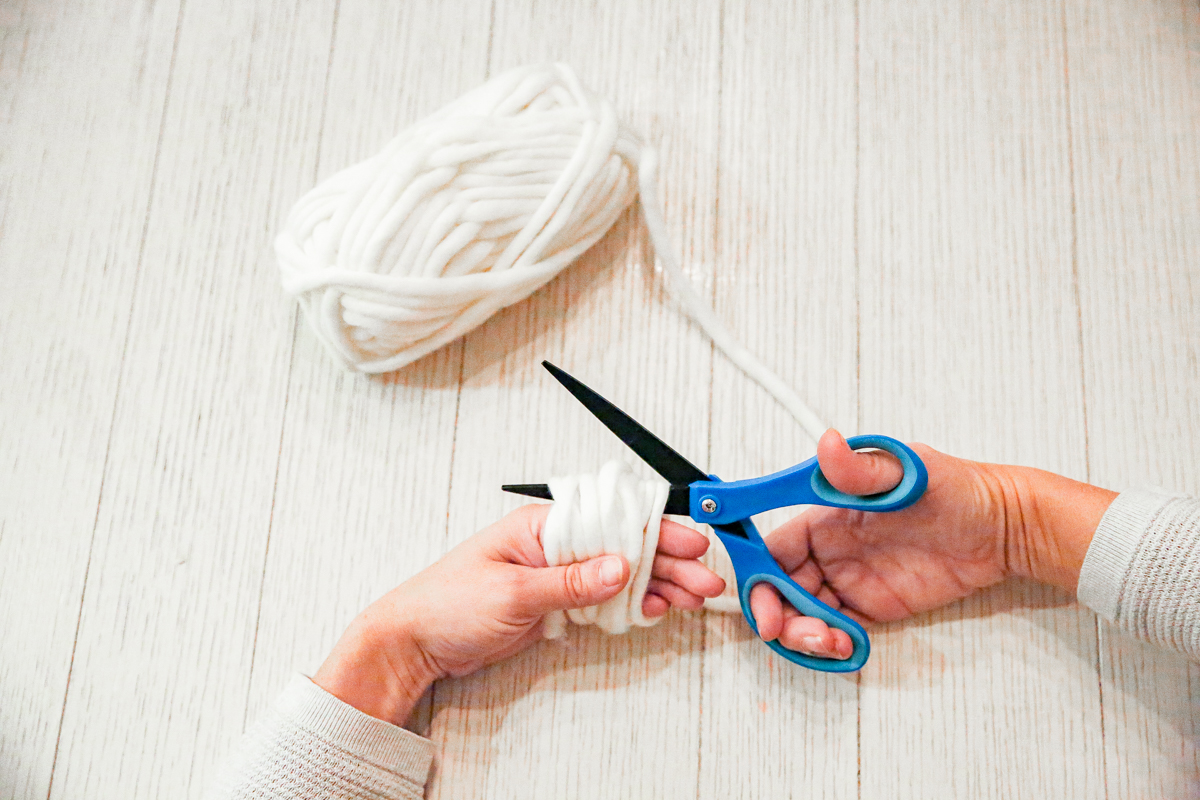 Now if I allow the bottom part of the yarn to fall down, it shows exactly where I need to cut in the middle. 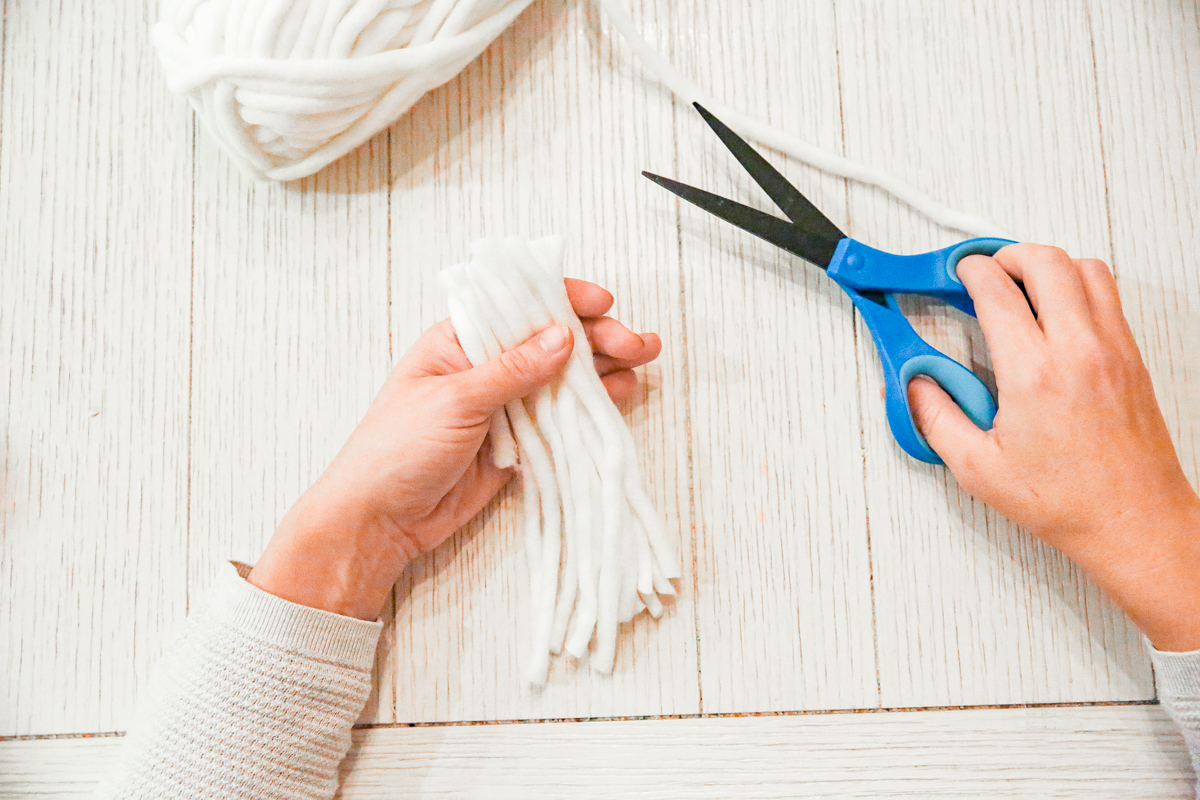 Cut to length and then you have all the pieces. 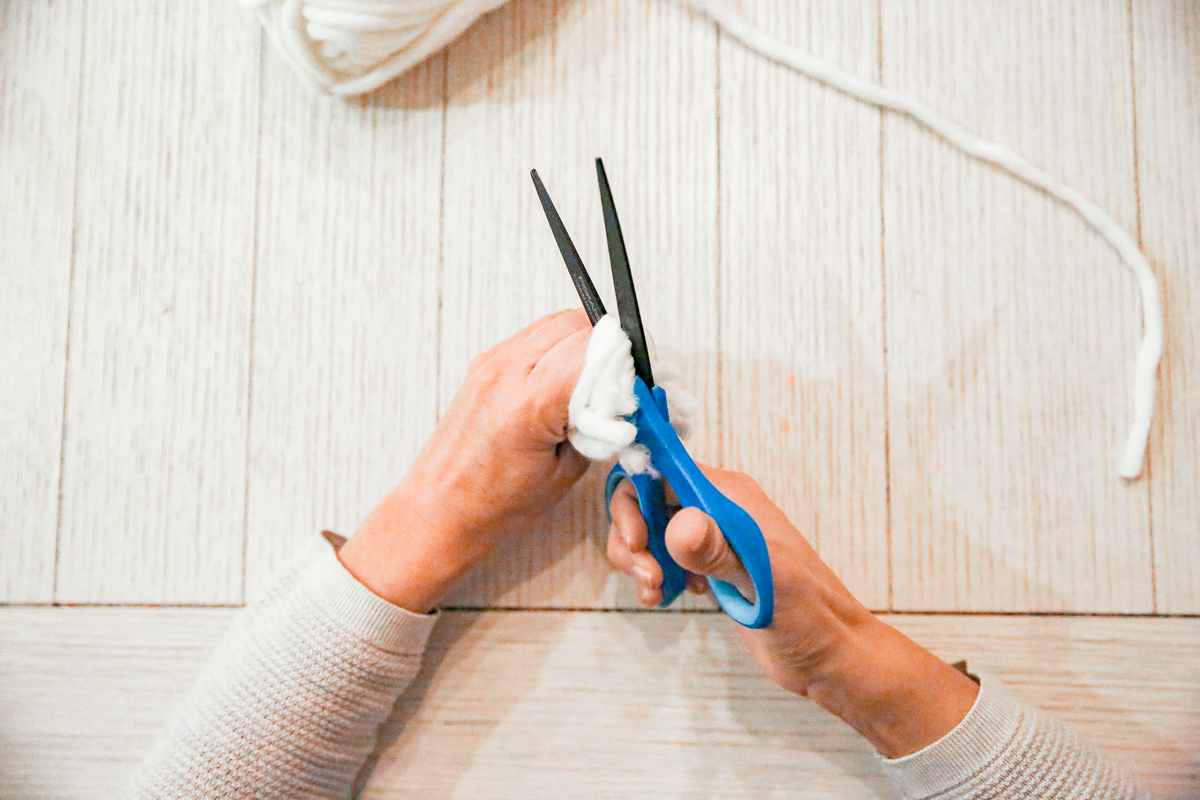 To begin your garland, the easiest way is to tie two pieces of yarn together and have a knot in the middle.  This will allow your needle and thread to go and have something to really hold onto. Next I threaded my needle.  It was roughly eight feet of thread looped through the needle and tied in a knot.  Then my first piece was started by pushing the needle through the center of the knotted yarn and tied off. Then I began stringing the yarn pieces onto the thread.  It doesn’t really matter if you get it perfectly centered. 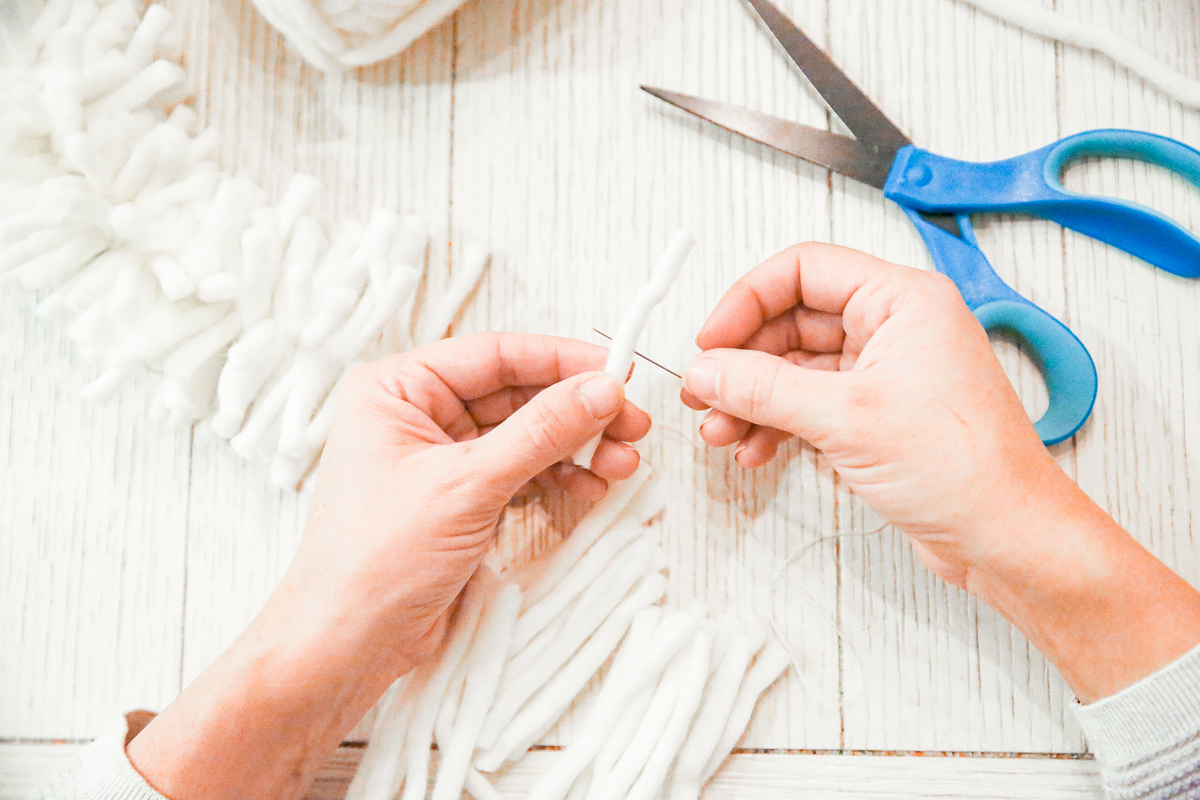 I liked a very tight garland so I pushed the pieces onto the thread tightly but some of the crafty folks who have done this project after I posted it on Instagram, they did it looser and it also looked great! At the end of your garland, just tie off the thread on the last few pieces of yarn.  You can extend the garland by just tying the next stretch of thread to the existing garland or you can make a completely new garland and then sew them together. I created a couple in white and also the same yarn in green.  I think I might make a bunch of the white ones for a Christmas tree garland.  I also loved all the suggestions from friends on Insta… 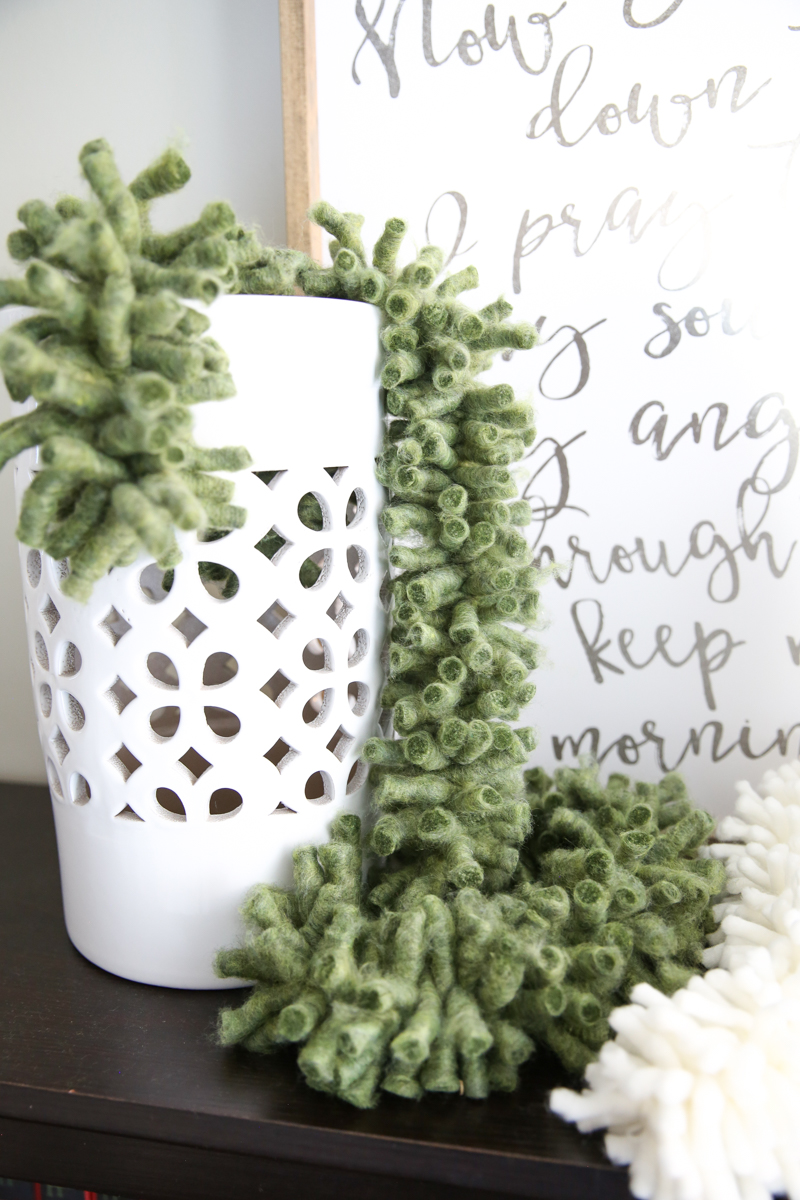