No…not a shopping outlet.  Have a couple of those…just ask my debit card.

And not the kind of outlet that implies I need to vent.  Have one of those too…just ask anyone that reads this blog.

The kind of outlet that provides juicy electrical currents for spotlights, speakers, twinkle lights and microphones needed for wedding toasts.

Yup.  One of those kind of outlets.  And yes, we may be rewinding a bit so that this post makes sense for all you new-to-Bower-Power-people.

Let’s begin with this… This year we were asked to be part of the True Value Blog Squad.  That meant that we were gonna share some projects (like our chair makeovers, and our basement overhaul, and Will’s sushi colored wall reno) and our pals at True Value were going to help us with supplies and sponsor each post.  Awesome gig, huh?  iknow!

Well, then my only sister decided that our house would the spot for her summer nuptials.  Her decision to get hitched in our backyard spurred some quick renovations and basically meant that we had three months to get our foreclosure into shape to host 100+ of our family and friends.  Talk about bridal bootcamp!

One such change that absolutely needed to happen was to add an outlet to the light post that stands over the smaller-than-regulation tennis courts.  Yes.  It sounds pretentious that we have tennis courts in our backyard…but in the end, it was actually a god-send because it happened to be the perfect spot for Nornie’s reception tent… See that little gray box directly above the tennis net and just a smidge above the green fence?  That’s the light that we are talking about here.

And since the tent was planning on sitting directly above the courts, we needed some power to plug in lights.  That would be helpful at an evening wedding that lasted till 11pm, huh?  Although, eating barbeque in the dark sounds like a sure-fire way to make things fun 🙂  So literally the day before the wedding, my darlin boyfriend installed the outlet in the existing electrical box. Here are some of the tools he used. And some other supplies he picked up at True Value.

Oh and please note that we do not recommend being like us.  We used a non GFCI outlet…you should always use a GFCI outlet when having an outlet that is closely exposed to moisture (this this one being outside or in your kitchen or your bathroom)…but we used this kind of outlet because 1. it was the only one that would fit in our already installed box.  2. we installed it temporarily for a special event and 3.  this outlet is on a separate breaker and a switch…that stayed off till the time of the event…which prevented the box to have both power & moisture.

As you can see below – we started with an already installed electrical box.

Jer removed the face plate and double checked that all the wires were dead with his tester.

Then he pulled them out and prepped them for the outlet. This particular type of outlet is easy…you just plug in the black wires into the right holes in the back labeled HOT or BLACK.  And the white wires went into the ones labeled WHITE. Then you use the screwdriver to secure them into the box by tightening the screw on the side. After that – you just push everything back into the electrical box, screw the outlet face tightly on the box behind it and then put on your outdoor box. 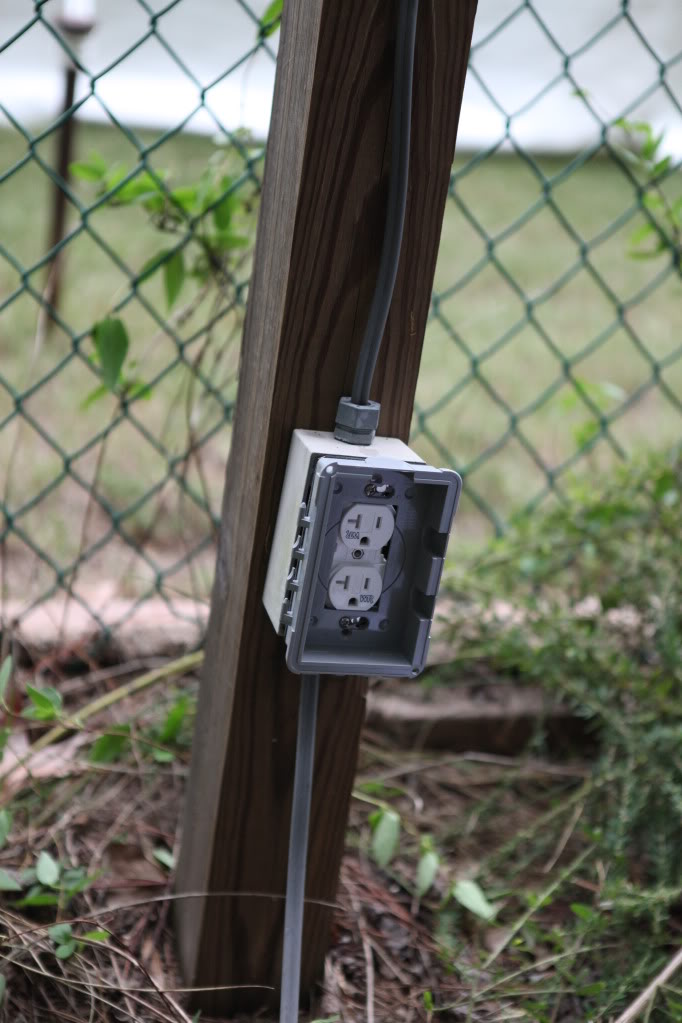 Attach the lid and you are ready to go! And for a full blow-by-blow – check out my boytoy getting this installed with this here video…WARNING: you must understand I was sleep deprived from wedding prep…trying to video and take photos at the same time…while having no idea where my toddler was…not my finest moment…so excuse the random interuptions during this video 🙂  Also – I would like to be the first to say….I married a total hottie.

0 Shares
« Give Santa some Pom-Poms
SUPRISE! We Painted Will’s Room! »