Let’s pretend we are going shopping together at Ikea.  That would be fun.  You, me, a few rowdy rugrats, maybe a couple lemon drop martinis, of course a babysitter that teaches children French cooking in her AirStream trailer in the parking lot, and maybe one of those hover-round things that the cops ride on….what are they called?….segways?  Or is that considered drinking and driving?  Can you even use those in Ikeas?

Let’s just go back to when we were martinis in hand with no kids in an Ikea.  We are shopping.  Commenting on the displays.  Making jokes that a million point seven people have made about moving in.  Rubbing our faces on the rugs.  Stroking cabinetry.  Attempting to get dressed in those clothes fake hanging in the closets.  Let’s do that.  Sound fun?  Because that is like a dream girl date to me… 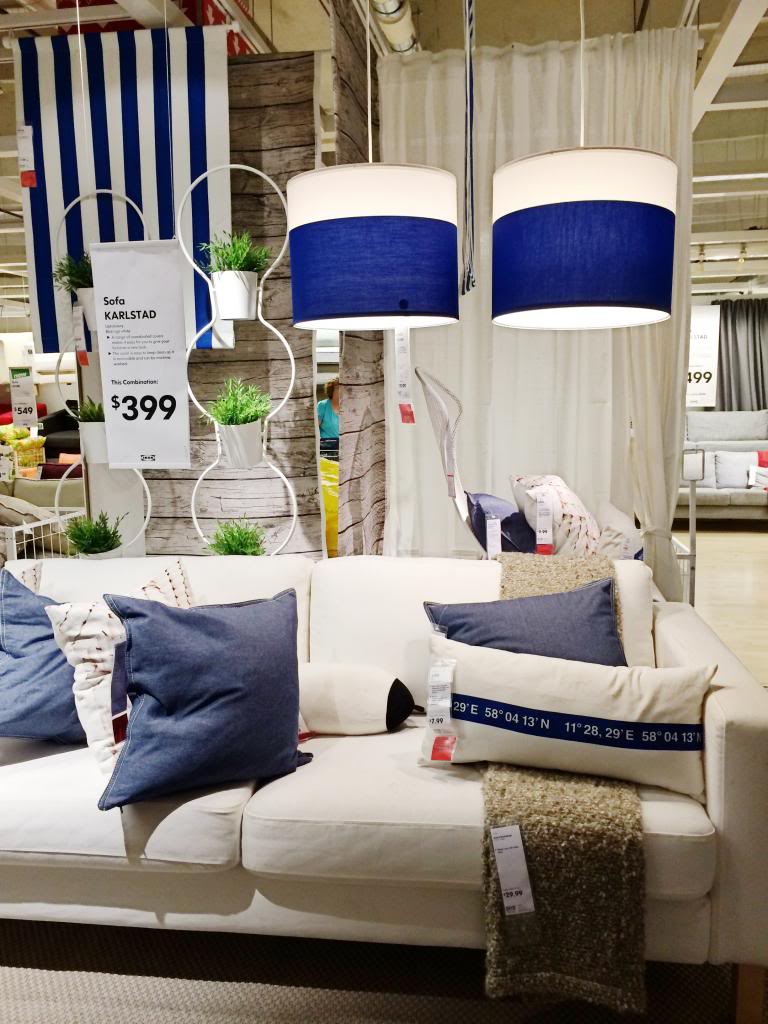 Those half n half shades are adorable.  As is the latitude pillow.  And I love the little white couch.  You know me…white couches are my version of Ryan Gosling.  It totally says Hey Girl on the tag.  And let me just say that the wood fabric is such a good idea for folks that want to create a planked wall but are renters.  You can just adhere it with starch!  Go Woody!

Love the duvet cover below.  I think it could be styled better.  Let’s just say that this is not the bed I would be pretending to sleep in. What is going on here with this bedding?  Is this cute and I just don’t know?  The stripes on stripes is odd to me…like too close in scale.  I don’t hate the yellow ticking…but with the mustard wall?  Baby poo anyone? I do like this room.  The floors are cool.  The vibe is very teenage girl.  Just switch out the candlesticks for a track trophy and the purple books for a tablet.  Because let’s be honest…kid’s these days don’t know what books are.  Whaaat?! 🙂 Super neutral but still cute.  It could have been good to do a little color somewhere, right? I thought it was a cute idea to put a shelf above the bed if you don’t have space for a side table.   Wall mount the light and make sure you REALLY secure those upper cabinets.  Nothing says wakeup like a cabinet to the face. I only took one photo of the bathrooms and this is it.  I thought it was interesting to see a ‘double vanity’ but separate.  I dig the open storage but let’s just be honest…you would have to be OCD about cleanliness because otherwise this could be double the mess. Moving on to kitchens…

Brown kitchen!  You just don’t get to see a whole lot of these.  And this one had a rich chocolate wall.  Personally, I think the lights are off…but the mix of cabinets is cool…and the art is super fun. Okay if there was a kitchen that was stereotypical 2013…this is it.  I wish I had a bigger shot.  Tuxedo cabinets, chalkboard wall, subway tile with dark grout, open storage?  Yup.  2013 slapped Ikea and left this beautymark. My favorite kitchen of the day was this guy.  It must have been that faux brick wall.  It was like the long lost cousin of Weston’s wall.  Such a manly space.  Bobby Flay can cook for my family anytime in here…ya know…if the appliances actually worked. Isn’t this one interesting?  It’s so big and completely white.  And those lights….like something from a optometrist’s office.  See the optic nerve?  It would be a great prop for laser surgery.  Speaking of which…I totally want. Jeremy likes the giant art.  He thought it would be interesting to have big statement like this in a kitchen.  I agree. Speaking of interesting…look!  a traditional type kitchen!  in Ikea!  The storage here is insane. I hear that southern kitchens are white.  Is that true?  Is that the stereotype?

Because if Ikea were any indicator…it’s definitely true.  Most of the kitchens were white.  Like this one.

p.s.  I licked that sink.  Just checking to see if you were still reading. Another white kitchen but this one had a much richer feel…I think it’s the backsplash and the black countertop.  It actually reminds me of what I wanted to do in our kitchen before I met my soul mate (aka marble hex tile). What do you think of this bad boy?!

That backsplash is weird and awesome at the same time.  It works in this space but I don’t think I could ever do it.  It reminds of a bag of cotton balls that got fossilized.  Also I need to take a poll about where that backsplash should end with a hood….at the bottom of the hood?  at the top of the cabinets?  all the way up?

I do love that waterfall island though.  It’s gorgeous. I can almost be a fan of this cute dining area…almost….as long as someone changes out those striped chairs.  I don’t know why I can’t get over it…but seriously.  can’t. I do however LOVE LOVE LOVE the gallery wall.  I love the good mix of frames and the other objects. Love the green lamp.  Love the big mirror.  Love the scale of the light to the table. I’m still thinking about this cabinet storage unit that was in this dining area.

I don’t know how I could pull this off but it sure is intriguing.  For someone like me (hoarder of all the dining things), I like storage. MY ABSOLUTE FAVORITE!  This is just beautiful.  The iphone couldn’t capture the beauty like it deserved.  That tile was sweet.  And the counter was laminate LAMINATE!  LAH-MA-NAAAAAATE! I need a new pantry situation.  My pantry is just awful.  Although I don’t need that many wine racks.  I’m gonna go ahead and say my apologies to your liver Ikea.  Or maybe it’s for your sparkling pear juice…in which case, you are not a lush and that stuff is delicious. Big map!  or should I say Big Mahpp! I don’t always look at the shelving.  But when I do, it’s gotta have four copies of each book.

And if you are under 20, a book is one of those things that has a hard back that you bare down on to write a check….oh right. So what did you love?  hate?  mock in your head?  I’d love to hear those Ikea thoughts 🙂