At the end of June, Max turned three and we celebrated with a big family Cars themed Birthday Party.  He technically asked for a Jackson Storm birthday but since his cousin literally had the exact same birthday party only days before (and there was no way I could source everything that specific in only a few days), we suggested a Lightening McQueen birthday theme and he was very excited about it.

This was a family only birthday and so I thought I would take some time and tell you about my Max and then also share some of my favorite tips on making a birthday party have a theme but on a budget. First – my Max.  Sweet fun loving enthusiastic Maxi Knight.  He is one of the most vibrant and colorful and happy little boys I have ever known.  He celebrates even the smallest of things with the biggest smiles and most jubilant joy.  He is a lover – always generous with sloppy kisses and big bear hugs.  He isn’t one of those sack of potato huggers either.  Oh no.  He monkeys his little body onto you and squeezes with the force of a whole crew of toddlers.  And oh the squeals and speed which he runs and jumps into your arms when he sees you first thing in the morning!  He doesn’t wait till you are ready….but you better be ready because there isn’t anything that can slow him down.

Being so much of a touchy feely kid – he loves to sleep with us.  He sneaks in every single night and will climb in between us ever so carefully.  And he is the worst in the carseat.  He figured out how to unbuckle himself around a year ago and it doesn’t matter what brand it is – he will figure out how to bust out and scare the living tar out of us while driving.  And his little ‘figure-it-out’ mentality doesn’t stop there.  He tackles most of his little two year old problems with the same bull-in-a-china-shop-won’t-be-stopped force.  He is known to scale cabinets to the top shelf to unearth hidden candy.  He has opened a can of oranges once (it was a regular ole can – we still can’t figure out how he did it!) and he LOVES to be naked.  He has raided his brothers bedroom and put all the dollars and coins in his own piggy bank because he said “I have no monies”.  And he is the one child that can literally be in a full meltdown and decide that laughing is more fun and just kiss your face off.

He is my only baby that looks like me….the rest are pure Jeremy and Jeremy’s family.  And he surely lives up to his name – which means ‘capable’.  There is nothing that I think he couldn’t do.  He will figure it out and then enthusiastically congratulate himself and cheer on everyone else.  That’s just his style.  He was my biggest surprise baby – the one that was half cooked before I even knew he existed….and he has been hands-down the BEST surprise of my life.  I can not imagine how life would be without my bright little shining star!

Now onto his birthday celebration! 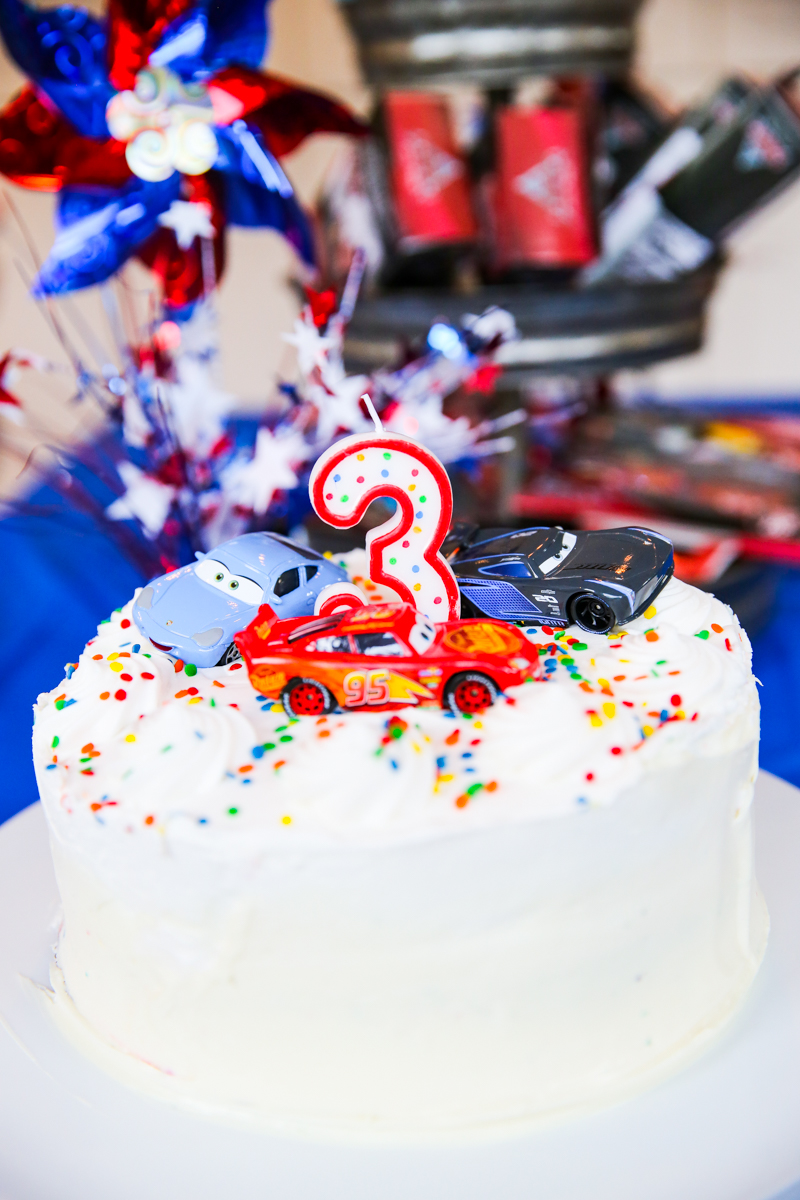 First – we had this as a family birthday – which meant that his sweet cousins came.  These are his best friends and he only cares if Levi, Isla and Clay are there 🙂 As for decor, I found that my kids do not care about most decorating things.  Granted that doesn’t stop me from getting them.  But for this low-key birthday, I stuck with very minimal birthday wares.  A couple fourth of July table centerpieces from the dollar store and a big blue table cloth were just enough to make the table feel special.  That single table of items is enough for kids to recognize that YES this is a party.  And YES this is very special.

I also made sure that the kids had themed plates and napkins.  My kids immediately think these are ‘birthday’ items since we normally don’t have cars on our paper plates. I keep the food rather simple but always try to have a lot of options.  I also try to get a cheese and cracker tray (or make one if time permits) because I found that most kids think of that as “safe”.  I don’t know about you but my kids hesitate to eat new things sometimes and so that one tray is the gateway to the rest of the meal in the mind of a toddler. Also can we just give a slow clap for the ability to use the entire island now?  I mean….life.changing. As far as activities, I also hit up the dollar store and Walmart for some cheap Lightening McQueen items that the kids could do at the party if they chose or they could pop it in their baggies and take it home.  There were stickers, crayons and a coloring pad.  It was very affordable and made it seem like there were activities (that I didn’t need to monitor! huzzah!) and that also bulked up their goodie bags 🙂 Max was just thrilled that there were Jackson Storm crayons.  He told everyone that he had a Lightening McQueen AND Jackson Storm birthday after that 🙂 As far as the cake goes, I just bought a plain white cake from Walmart and made sure to put a big candle and lots of sprinkles on top.  I also decorated with three little Cars toys – these were perfect as a prelude to the gifts and Max LOVED his “cars cake”. Another thing we do that is affordable and makes parties special is that we get the kiddos a new birthday shirt!  In general we don’t buy shirts with the numbers on it or the ones that say It’s My Birthday (honestly I would probably forget to put it on the kid and it’s irrelevant the rest of the year!)…instead we opt for a shirt that coordinates with the party.  The kids love it! And the only thing I make sure that the kids have is a little treat to take home.  I always do these cups ($1 from Dollar Tree or Walmart) and then just stuff with temporary tattoos, snap bracelets, candy and balloons.  This way I also make sure that Max is saying “Goodbye and thank you for coming!” to all his guests. That is my recipe for small party success – a theme, a small group of close family or friends, minimal decor and activities that will double as take-home items, as well as that sweet little cup of goodies, one t-shirt and a bunch of food for the masses!

What is your trick for doing a small party?  Is a piñata a must-have?  Or perhaps you skip the food and go straight for dessert?  Maybe you do the whole location party to make it feel more special?  Or you just limit the number of friends?  I’d love to hear what you do to make your party a success no matter the size! 0 Shares
« I tried a Capsule Wardrobe – here is what I learned!
How to Brighten a Room »