This is a sponsored post brought to you by FrogTape. The opinions are completely my own based on my experience.

The kitchen continues.  The trim is painted.  The cabinets are primed.  And now it comes time to paint. We have found that our numero uno tip for painting any type of furniture and getting that factory type finish is to sand.  It’s tedious and tiresome and a turd (had to come up with a third t-word) of a job…but believe me, it helps. 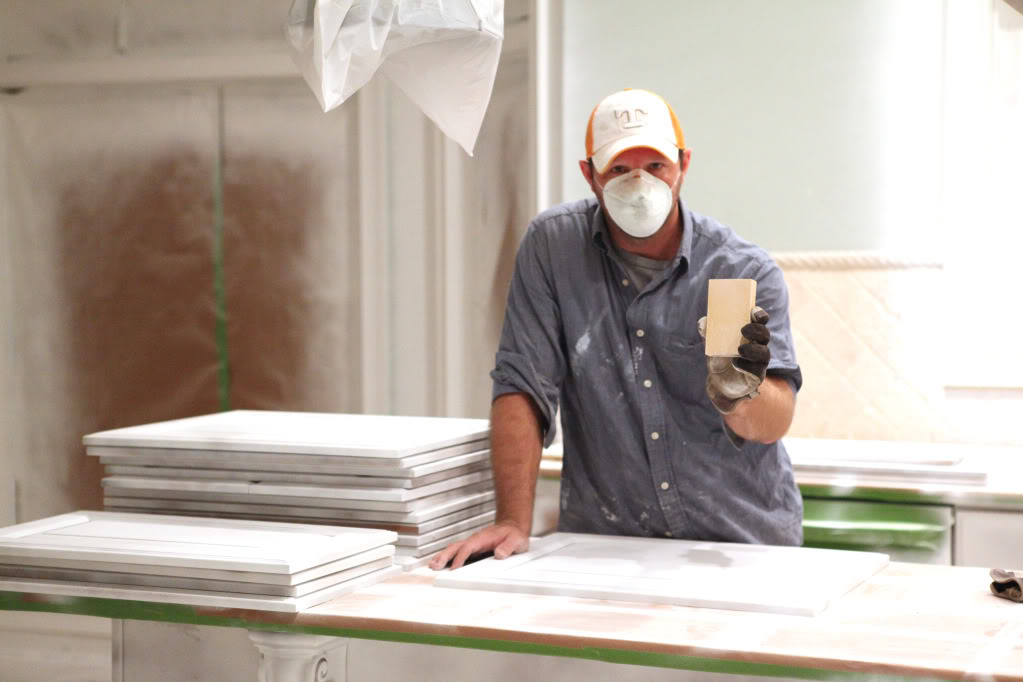 For the cabinets, I decided to go with Benjamin Moore’s Advance paint.  Now here me as I step on my soapbox.  This may have been a mistake…we will not know till the cabinets are fully cured and we lived with them for a bit.  But applying the paint with a sprayer?  Not good.  First let’s talk about why we picked that paint….

Now for the cons…

As far as color, I chose Benjamin Moore’s Simply White.  I LOVE it.  It is slightly warmer/richer feeling than the trim (which is just the bright white base in Lowe’s Semi Gloss paint) but doesn’t clash.  It just looks good.  I chose it after googling the tar outta the different whites and felt like I would need something that looks bright white but would be slightly better at hiding toddler fingerprints.

Once we had our paint, we prepped the room for spraying and my magician of a boyfriend went to work.

I only got a couple shots of him in action because I had to go outside onto the deck, hold my breath, put on a mask, open the door, run in with my camera, shoot him, and then run back out to breathe.  The mist is intense with a sprayer. When he first started spraying the paint, he treated it like he did the semi-gloss trim paint with nice even coats.  But reminder: it’s thinner than that with a longer open time.  So I heard the sprayer crank on, a few moments of spraying, and then Jer yelling…

Apparently I had failed to fully describe the type of paint we were working with.  It’s thin.  And the sprayer doesn’t do thin real well.  So the first two cabinets near the dishwasher were dripping immediately.  I ran to get my spare foam brushes as Jeremy sat with his head in his hands.  He kept beating himself up thinking it was his fault.  We both tackled the drips and sags and too-thick spray and decided in the end that this just meant he would have to do super fast super thin sprays.  He modified his method and within ten minutes the first coat was on and he was done. Then he laid out all the doors and did those too.  They are propped up by scrap 2×4 pieces underneath. Then came time for the edges.  Since Jer had to spray fast, that meant that lots and lots of edges need to be touched up.  Basically, we had to use a mini roller and a foam brush to do everything that didn’t get a nice layer already.  Jer helped me do it while Will watched Barney.  God bless that purple dinosaur. Some folks were asking about putting up plastic as barriers and if Will wanted to run through them.  Yes. and No.  He called them doors.  And liked looking through 🙂  But in general, once we figured out a good taping method, we just told him that he couldn’t touch them and he could only look.  That seemed to work with him. Our method for taping up the plastic doors was pretty simple.  We use Frog Tape because it is like the Chuck Norris of tapes….you just can’t beat it.  Just tape a strip around the opening where you want the actual seam to be for the paint.  Then cut your paper for the floor to extend past the doorway for any potential overspray, drips or footprints and tape that down too.  Cut your plastic to be two inches wider than your doorway (one inch extra for each side) and it can be seven inches longer for the height (one inch on top and six on bottom).  Hang your plastic starting at the top using the Frog Tape (we used the 1.5 inch tape so it gives plenty of stick on both sides) and then pull taunt to the bottom and tape the bottom.  Then do the sides. When you have to use the room, peel back from the top by grabbing the tape (not the plastic or it could rip).  Our tape restuck and held true through over a dozen of opening and closings. So that’s our paint-the-cabinets-and-tape-off-doors-and-don’t-kill-each-other-while-we-try-to-finish-process.  We do still have a tiny bit of touch up to do on the edges of the doors (we decided to go ahead and hang them up so that we could put up some dishes that were growing spiderwebs in the foyer).  Next up – CEILING!  Did you notice the ceiling in some of the later cabinet painting pics?  It happened in the middle of the cabinet painting process 🙂