Thanksgiving this year was so different.  In nugget form….it was small and I cooked a turkey.  AHHHHH! So, this is going to be one of those weird family posts where you get a glimpse into the real behind the scenes of the Bower house.  In years past, we always had big family gatherings….26 people was our average.  And this is one of the first years that my grandparents haven’t been able to come down.  About two weeks before Thanksgiving, my Mummum was taken to the hospital and so my parents decided to book flights to Pittsburgh to have the holidays with her and my Pappap.  It was COMPLETELY the right decision….but I still missed them terribly.  This was my first time doing Thanksgiving without my own parents.  I know.  I sound like a 16 year old whining about bad wi-fi but honestly, this was just a big step for me in this world of adulthood.  I mean…I don’t even know how to cook a turkey. The plans moved forward to have Thanksgiving at my house and we decided to make a whole three day extravaganza of it with my sister and her family.  They came over Wednesday and we spent a solid amount of time prepping food, playing this game, and making children sandwiches 🙂 They also brought us greek food for dinner which is AMAZING because there is not a single place here in Loganville that has good tzatziki sauce. We also had this happen by complete surprise!  Matching jammies!  You know I love them! The dining room was already ready….which is a first….but it’s so nice to set it only for six people!  We usually prep folding tables and this time it was like legitimately fancy. I made this centerpiece by using a grapevine wreath and a glass terrarium.  I simply put picks of flowers and fun stems around it and then laid it on a runner and some cat-tails and pussywillow branches. The candles I put inside and then filled around them with acorns from our front yard.  The other odd spots I just filled with more pine cones from the woods.  It turned out REALLY pretty in real life and still felt very autumnal even with the use of blush pink in the mix. I kept the rest of the table simple so that the centerpiece felt like the main attraction. 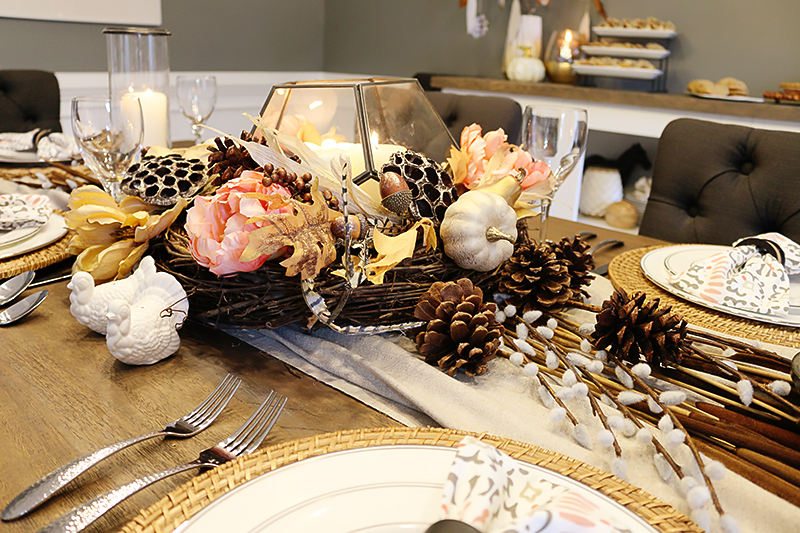 On the buffet is where we put the deserts and the Gratitude Tree.  I moved all the fall stuff into this one room so that we would be ready to decorate for Christmas.

Can we all just pause for a moment and slow clap for Nornie who made the nut roll?  Let me start. We also had a kids table in the foyer.  It was a sweet and simple set up that had no breakables 🙂 The kids have been proving that they are capable of sitting at a table all by themselves and it’s pretty amazing.  I mean…LJ and Isla are the youngest for this set up at two years old.  It means that I get a little more adult conversation which is always appreciated. I’m like an adult now.  Officially.  I expected it to happen when I decided on my own health care plan….but nope.  Turkey.

We did get to FaceTime with my parents and grandparents which made things feel a little more normal.  They weren’t eating till later so they got the full low down on everything we made. The only thing we forgot was the cranberry sauce.  Like literally it was in a refrigerator….and nobody even mentioned it until later.

My pride and joy.  Oh and I used Pioneer Woman’s recipe for a roasted turkey….I also did her brine but for a shorter time so that it wasn’t too salty.  Next time, I am gonna try stuffing it too….since this time, it was a little overwhelming. hope he picks a winner 🙂 This one cracked me up so I had to share.  I feel like the caption should be “give me your turkey and nobody gets hurt”. My little brother brought over a toy for all of us to play with and now Jeremy is in full Polaris mode.  He told me that I could buy him one for his birthday and for Christmas.  Since we sold our four wheeler, I told him I would consider it. After the dinner was done and the newspapers were sifted through, my sister and brother in law both headed to the stores to snag some deals.  They are the worlds most amazing and passionate Black Friday shoppers.  They literally talk about it all year long….so this was a good date for them 🙂  Also…maxi’s face 🙂  Also…I could really see what spots I miss when brushing the kiddo’s teeth. This is terrifying.  Straight scary. Me and Levi getting some quality cuddle time.  This kid is soooo chunky and delicious.  His thighs are like WhatWHOandHOW. Also, if you haven’t discovered these Crayola Color Alive books yet…they are great for little kids.  My kids like to color for like three seconds….and these force them to color for longer (HIP HIP HOORAY for QUIET ACTIVITIES!).  So basically they are just a book that they color and then there is an app on the phone that scans their colored picture and turns their creations into 4D.  See the picture on my striped legs? The pink octopus leg?  It makes the 4D version have exactly what the kids color!  My kids LOVE them.  They are a great stocking stuffer 🙂  This isn’t an ad – we are just fans. And of course, we also did a fair amount of crazy face swaps and Snapchat filtering.  Because you know.  It’s good for a laugh.  So basically I discovered that I have the face shape of a man.  That’s awesome. So there you have it folks…our Thanksgiving 2016.  It was fun.  Different.  But definitely fun.  And definitely more quality time than in years past with my sister so I am really thankful for that.  And yes, if you are asking…Jeremy is already scouring Craigslist for Polaris vehicles….so this year the kids will be getting full body armor for Christmas 🙂

0 Shares
« What we bought for Black Friday
Wardrobe Building »