I’m back with the tutorial on how to get that planked look!

And I’m not talking about the yoga move that is great for sculpting shoulders, abs and thighs…not that I would know but toned people make claims.  I’m talking about the wall treatment that I did for my brother for about $1.  Yup.  Super easy.  Super cheap.  Just plain super.  duper. 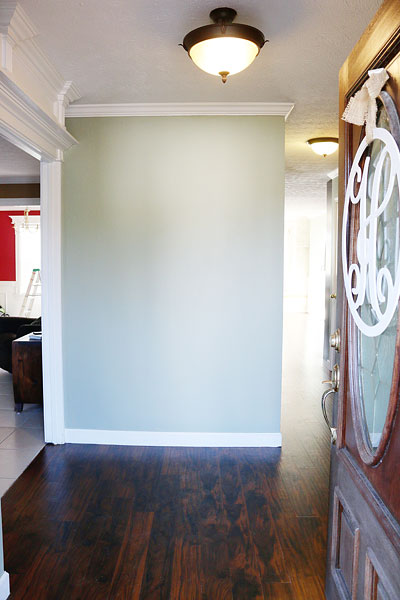 So his foyer wall was really plain and we jazzed it up as a 30th birthday present.  You can see the before & afters in this post.  I am gonna preface this tutorial as DUDE THIS IS THE OLDEST TRICK IN THE BOOK.  Like seriously Gandolf probably did this same thing to his home in Middle Earth.  (tricked you…Gandolf doesn’t have a house! Nerds unite!)

The point is….people have been painting stripes on their walls since forever.  Nobody get their itty bitty panties in a wad and tell me what a hack I am because I am explaining it.  As my mother says “not everybody knows how to make KoolAid, Katie” – it’s basically when she is telling me that just because someone doesn’t know how to do something, it doesn’t make them dumb, or less than, it just means that they haven’t been introduced to it yet….aka they haven’t made liquid flavored sugar in a cup.  Some folks don’t need to be taught how to make KoolAid…some do….this tutorial is for them.  Teaching it doesn’t make the fruit punch less addicting 🙂 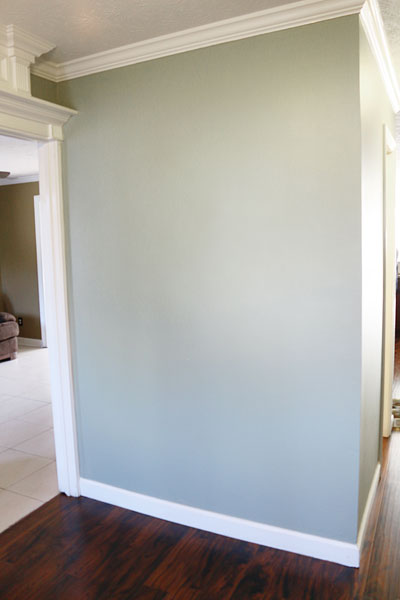 So this planking is simply painting stripes on the wall.  Very small stripes.  Pin stripes. So the way I did it was I first measured eight inches from the bottom and marked with a pencil a dot.  I marked eight inches every two feet or so….leaving me with three dots on each line and ten lines. 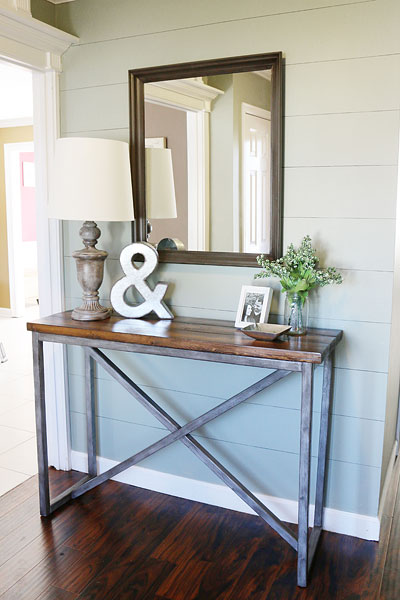 Then I used painters tape and applied it to the wall along those lines. 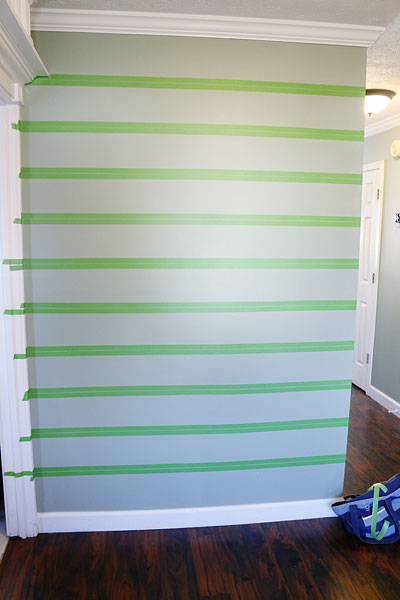 In between the painters tape, you leave about 1/8 of an inch.  Make sure your lines are even and level.  They might trick your eye in these photos because of lens vignette (look at the baseboard curve in the pic above) so just remember that if it doesn’t look level to your naked eye, then you might need to make slight adjustments. Then you want to seal the tape.  I use a wet paper towel to push all my tape seams against the wall…the dampness activates that good seal and makes your lines a little more crisp.  Then take some black acrylic paint….craft paint will work…and dab it on the paper towel or plate and then use a barely-paint-holding brush to brush on the paint into the line. Some areas of your line will be more dark than others….some will look slightly thicker….that adds to the realism of the “planks” in my opinion. Here is a closeup. So the question that I am sure will pop up is “Why did you not use a Sharpie?  Isn’t that faster and easier?”

The answer is….yes, it is faster and easier….but what if you want to repaint?  Then what?  Sharpie and other markers require LOTS more work to cover up whereas light paint requires no primer and just one coat to cover 🙂   I didn’t want to put that work on my brother if he decided that he really didn’t like this look.  That’s the thing with taking over someone else’s space….you still want them to invite you over later if they hate what you did 🙂 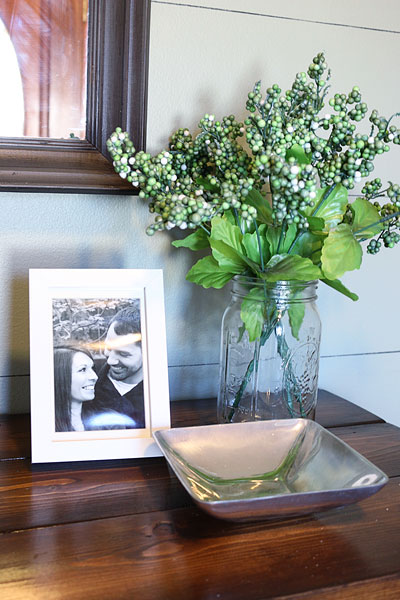 So that is my ultra easy $1 for a bottle of craft paint solution for adding that planked look to any wall.  Pretty groundbreaking stuff here folks!  And stay tuned for tomorrow where I share the lamp and mirror makeovers.   Now go plank something.  Just don’t hurt yourself.  Remember the words of Dwight Shrute…..”planking is dangerous” 🙂