Weston had a little pink car.

One of his favorite outdoor activities was just pushing this little pink car around till he was blue in the face.

No offense to any pink car owners out there…but seriously…my kid does not sell Mary Kay.  (although he could…with that complexion and those twinkly little eyes, he’d have those little ladies buying anything that he was selling.)  The toy was screaming for a makeover.  CODE PINK!  CODE PINK! The newer versions of this car run about $120 online…which is a WALLOP of a price tag when it comes to plastic.  But I do understand why…the push rod handle adjusts to a longer length so that both kids can play with it and adults can push their little one around without becoming the hunchback.  It also has buttons that really make noise (like a little radio and blinkers) plus a pull-out basket on the bottom for the little ones to rest their feet (and not entangle them in the wheels or get caught pushed back underneath the car itself when you are pushing).  And you are also paying for the Radio Flyer brand name. 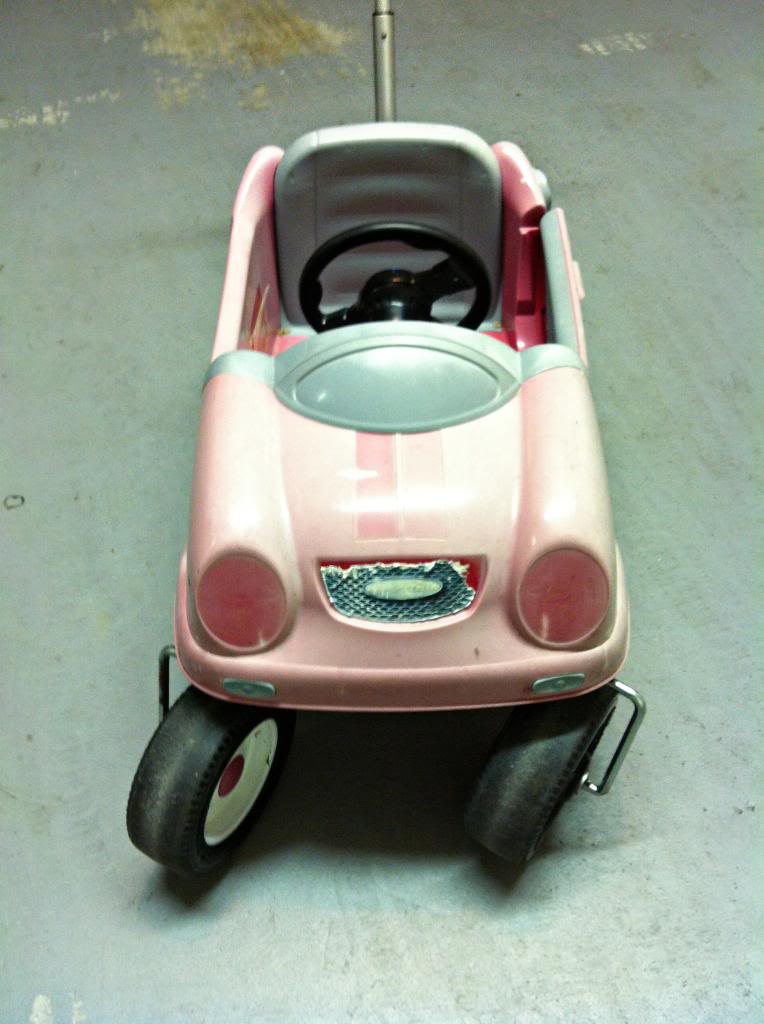 But this particular car had seen better days.  It was originally gray and red with sticker details all over it.  And now the red had faded to pink and the stickers had all but rotted away. Since most of the stickers were long gone, only a little residue was left and I was easily able to spray some of my De-Solv-It to remove anything on the surface.  I used a pan scraper thing to make sure there was nothing there and wiped it clean with a paper towel. Then I started unassembling.  It didn’t fully disassemble (much to my disappointment) but for the most part, the bits that did come off, I cleaned and got them ready for a makeover.  (see how the unexposed parts were still red while the stuff that saw the light of day turned pink?!) The rest of the car also got cleaned and I whipped out the supplies I needed for the paint job…namely three cans of colored spraypaint and one can of clear gloss topcoat just in case.  In this project it’s really important that the paint is made specifically for plastic or you can check the label of your own paint and see if it just requires a specific primer. Since we have been having some really cold nights and we knew that this would require a TON of uber-thin coats, we set up a spray paint station in the garage and just lifted the door for extra ventilation and then closed it whenever the item was drying.  I began with taping off certain things (like the metal rod for the handle) and bagged other areas (like the wheels that could not come off). After three thin coats, I did the taping for the black bits….anything that used to be gray was now gonna be black.  The best tip I can give you is use loads of tape, utilize an x-acto knife to trim away anything or push bits of tape in crevices, and do a “edge coat”.  An edge coat is when you have already painted something one color and another color could bleed onto that…so after taping, use color #1 to do a light spray on all the edges…making that bleed impossible and your lines super crisp. After the black was done, I started removing tape for the next color – white.  I decided to paint racing stripes (the original had racing stripes stickers) and white headlights so this was definitely the easiest step because the areas were small. After several coats and sufficient dry time, it was time to remove the tape. Then I did one coat of gloss top coat on everything (I did leave the steering wheel off completely and the dashboard buttons taped off because I didn’t want to have a leak of paint onto the electronic bits) and then started reassembling. In the end, my less-than-five-dollar thrift store car turned out to be quite the sporty little coupe. The before and afters are enough for me to think about starting painting real cars…..no….that’s a lie…but my little brother does paint wheels and I am really excited to show him this.  He’ll probably ask me why I didn’t chrome something out or give him spinners or something. The cost was about $21 total…$5 for the car and then a little over $16 for four cans of spray paint.  A huge savings of a hundred bones if I were attempting to buy it new vs DIYing.  Now to find a little license plate that says “We$ton”

So how did he react when we gave it to him for his birthday?

Perfect.  Actually it was a much better reaction than I hoped for (considering the car wasn’t really new to him…just the paint job…and do babies really realize that kinda thing?!) He was really into it.  Figuratively and literally.  (ignore the food on the shirt…he got to try a mini oreo…not his thing apparently). I just can’t believe my little guy is already ONE!  And I know that if he were talking, he would tell me that I was the best mom ever for giving him a brand new car on his birthday.  Remember that Weston….because it’s not happening when you turn 16.  Just sayin 🙂