I left off with Jeremy doing the demo in our kitchen and I am back today to bring you up to speed…..BECAUSE next week is gonna be the recap of our biggest house transformation yet!  So first let me walk you through all the things.

Jeremy demoed the existing pantry.  It was too small, didn’t function well, and we were gonna replace it with a wall of cabinetry to act as our new pantry. The goal was to get to this point.

The hiccup was that while we were demoing (see how I just slip the “we” in there like I did something?!), we saw a pipe.  We can’t get rid of said pipe….it’s the vent for the basement toilet.  SOoooo  we modified our plans….now the cabinetry would have to go floor to ceiling and the pipe would need to stay put and we would just simple build around it.

We hired an electrician to move all the wires, install an outlet that would live in the alcove behind the pantry (don’t worry – it would be accessible) and allow us to put our microwave in the pantry!!!! We also had him run a new line for our dream – the double fridge 🙂  And get us some more beef for our new double ovens.  Not literal beef.  Although that would make sense too.  More power – since the double ovens required more than the old zombie fridge. Jeremy and our friend Shawn (who is doing the cabinetry for us) switched the cabinets.  By flip flopping the fridge surround and the oven cabinet, we were able to reuse the oven cabinet for the new double ovens!  Can’t wait to show those beauties to you!!! And as always – there are always little tweaks like drywall and such that happen. When the fridges arrived, I may have lost bowel control I was so excited.  It literally felt like the BEST DAY EVER.  Euphoric.  Indoor fridges in the kitchen….who would have thought?!  But after years of going up and down stairs or into the garage, it really was super exciting. I can’t wait to tell you all about these and how they are transforming our life.  I have lived with them for a few months now and it.is.glorious. The kids were equally excited.  To think that the last time the boys had a working fridge in their kitchen, LJ was too little to remember and Max wasn’t even born yet!!!  Who lives that way!?  We did….but now that we are on the other side….I’m so glad we waited and got what we really really loved and needed.  Two fridges side-by-side!!!! Okay – so all that being said, back to the point.  We demoed the pantry (see I said “we” again!) and it left some pretty big drywall holes.  I was hiring Carlos (my favorite painter ever) to do our basement trim and so I asked him if he would throw in the pantry fix too.  Its my way of haggling and as someone that HATES doing drywall, it works out better for us both! There is his cutie wife.  She is so quiet.  Sometimes I don’t know she is even there and then her smile is like a lightbulb.  Seriously the BEST. We were laughing because he had to hammer a piece of board back a bit and it knocked through the other side.  WHOOPS!

Such is life with home improvements! He was able to patch the ceiling really well (much better than I could have ever done) and since this part would extend beyond the front of the future cabinetry, it was gonna be visible. He also mudded around the “new” oven (see that on the far left?) and fixed all the holes in the drywall. BUT the electrician had to take the wires from the basement down back through the subfloor and it was painfully evident that we needed the floors patched before installing the pantry cabinets. There were two spots with missing hardwoods. Enter Diego!  We actually met Diego through Carlos and he gave us a quote on patching the floors that was too good to pass up. Our floors are red oak and they took him about four hours to do.  It involved removing all the old pieces and feathering in the new pieces and securing them.  He charged us $140 and that included materials!!!  Guys what an awesome deal! 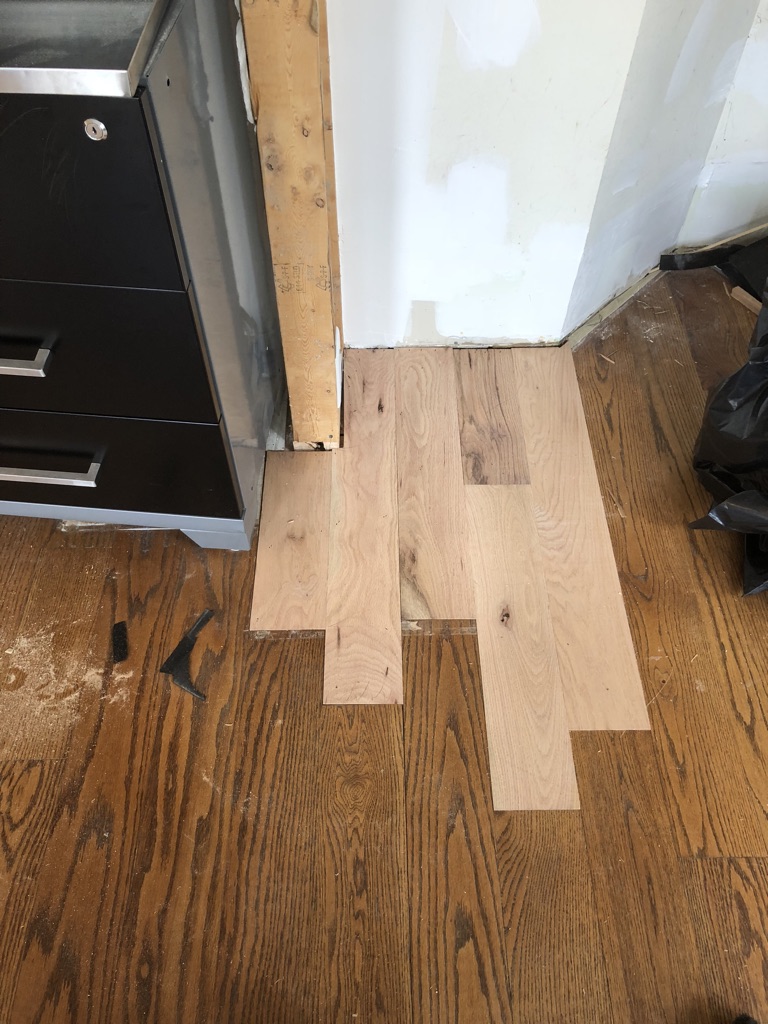 Meanwhile, our giant cabinet was being built by our friend Shawn for our pantry! SOooo….while we had Diego in our house, we also got a quote on refinishing all the hardwoods.  WHAT?!  I mean….I told you guys about this pipe dream of having the floors refinished but it was out of our budget completely.  But Diego was really able to work with us (plus, I think Carlos loves us and he was pulling some strings) so we decided that we better do this NOW because moving EVERY single thing out of our first floor would be so crazy and doing it right before a big vacation (for dry time) is key….we pulled the trigger y’all! Say bye-bye to the orange floors!  We can’t wait to share with you the process and experience and basically everything from how we picked the new custom color to how we clean them to how it really is living with the refinishing process!  That is all happening next week!  Oh and did I mention the before & afters?!  YASSSS.  That is all.  YASSSS.