This past weekend was a full ride.  I could try to explain but it probably wouldn’t make a lot of sense.  Basically I wanted to throw a pumpkin painting party.  The reasons are numerous and convoluted…but the end result is the same…caramel apples and chili and cornbread out the wazoo. 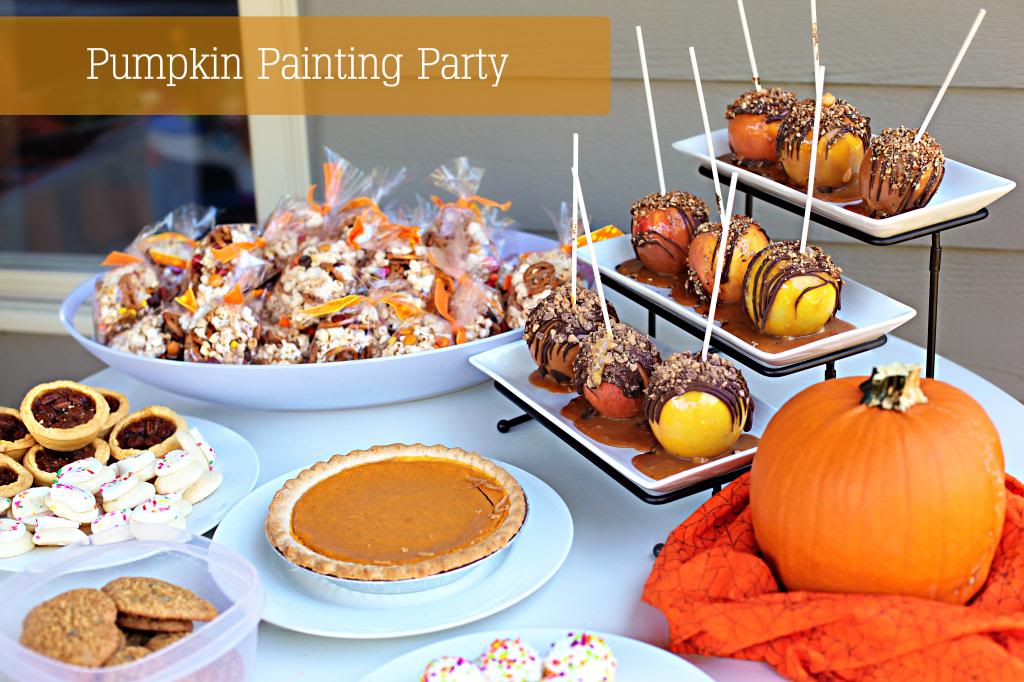 So a couple months ago I told all the ladies in my church group that we would be hosting a pumpkin party and that I would send out an invite later.  I whipped up a super simple email and sent out the homemade ‘evite’ a couple weeks prior to the event. Then came time to get ready.  I intended to make the menu REALLY simple…chili, cornbread, goodies.  That’s it.  But in the end, it never works out that way.  I always go overboard.  Thankfully…when you start small, going overboard means getting to a normalish spot.   All of the food I started the night before. This was my first adventure in caramel apple making.  It had a few hiccups…but in the end, I think they turned out looking almost as delicious as they tasted. 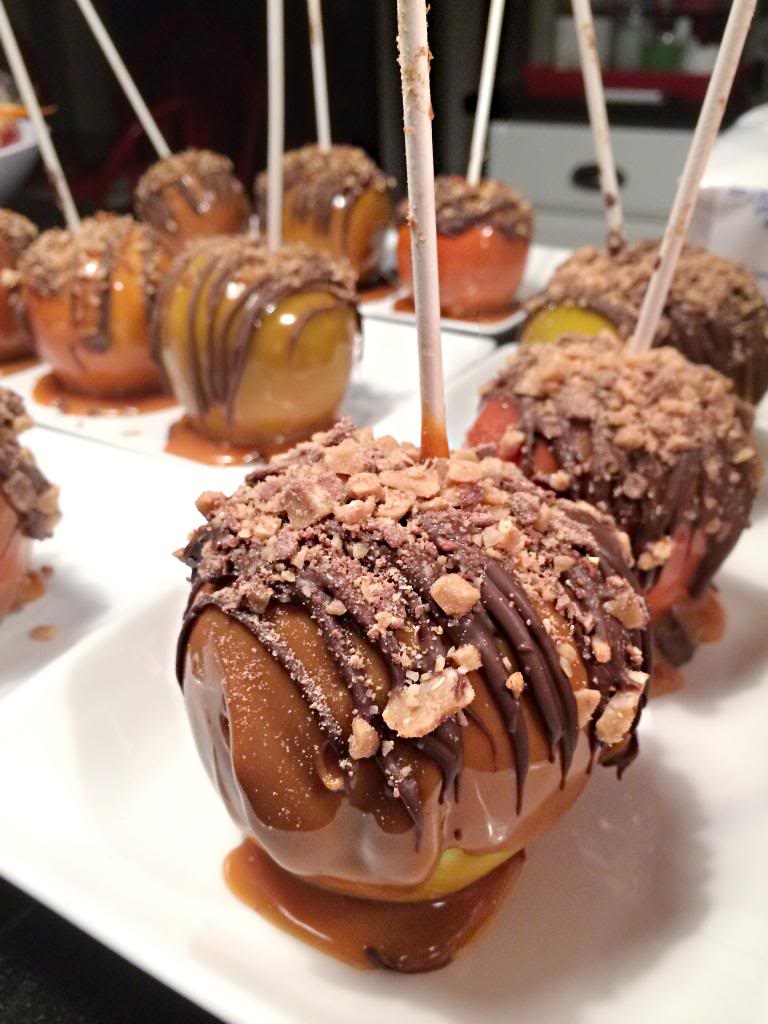 The food was placed on a folding table that I had draped with a drop cloth and a wipeable Halloween tablecloth.  The jack-o-lantern and cat garland I got for a couple dollars at TJMaxx during an after-Halloween-sale a couple years ago. Folks kept adding food dishes and by the time we were done, the 6 foot table was busting at the seams.  I think I might need to get another one just for events like these.  I mean…nobody wants to serve the potato salad off the floor, right? 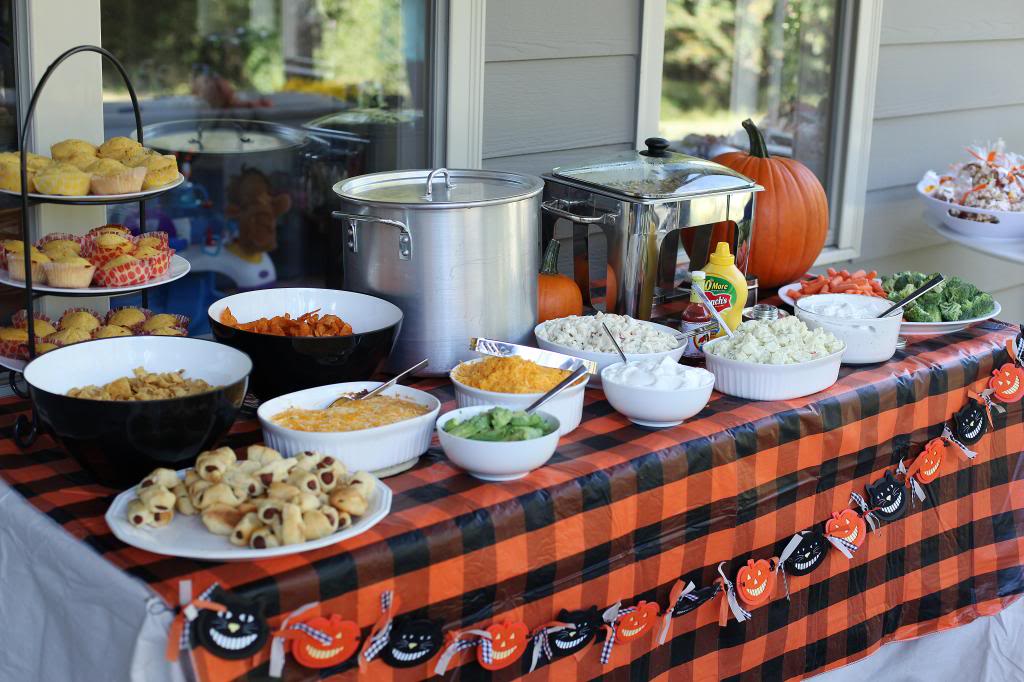 The big table that we built for the patio was decorated with a long burlap runner and little pumpkins.  It was really fast and easy. We had a ton of drinks in a cooler but our glass bottled beverages we put in our patio side tables.  Jeremy built these tables (I have still yet to post the plans) and we discovered that if we didn’t attach the top pieces, that we could pop them out and put in a small pan to hold ice.   People still put their drinks on the edge but this is a nice feature for parties because I don’t like putting glass bottles in the cooler with the kids drinks and the soda cans. Plus, it is just darn cute to see harvest pumpkin ale out during a pumpkin party 🙂 Both boys (and myself) have been under the weather so it was a good distraction but I’m hating that both boys didn’t enjoy it as much as I had hoped. 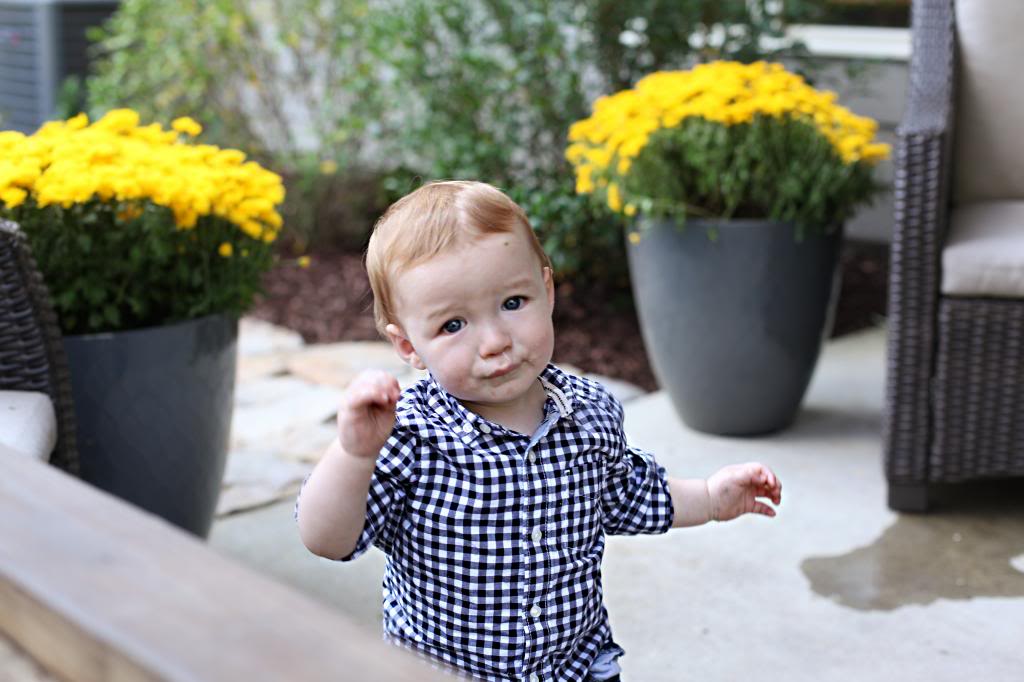 Weston just wanted to be constantly held.  He usually isn’t like that.  Also, I feel bad because normally I could comfort him with nursing but this past week he has decided to stop breastfeeding completely.  I tried everything I could think of  and every thing I could find online.  But he just up and decided that he was done.  It is an end to a season and I have to remember that it’s ok. 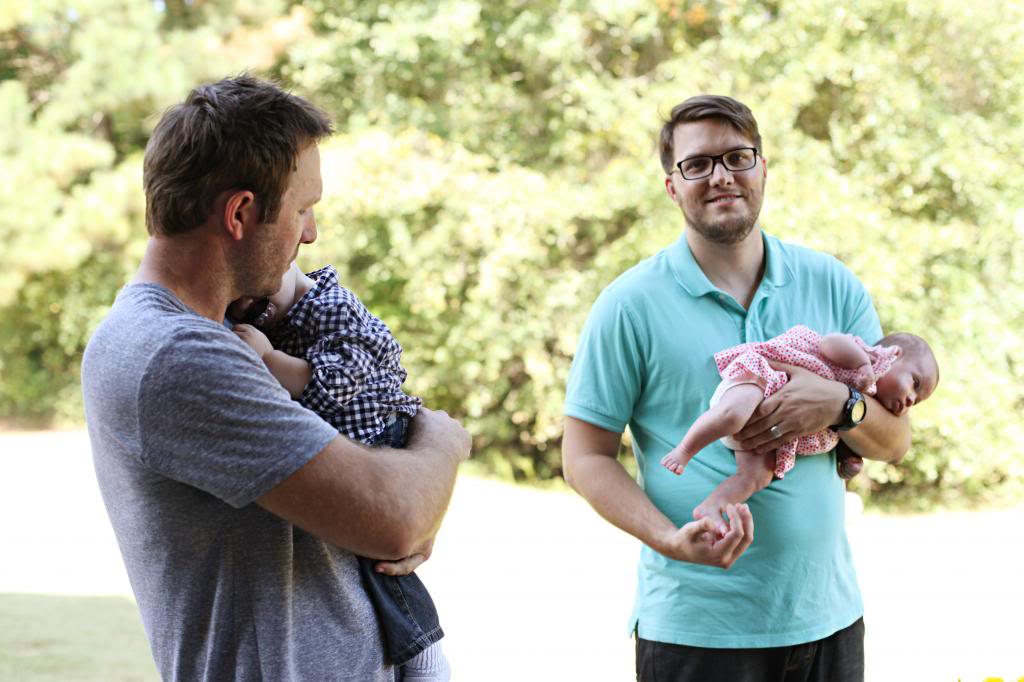 Jeremy borrowed our neighbors trailer and we loaded it up with hay bales and the kids all went for hayrides through the property.  I wish I would have gone because they all loved it. As for the pumpkin painting part, we set up two folding tables and bales of hay for seats.

I got some washable paint and foam brushes and put everything out on drop cloths.  It was the easiest setup and clean up. 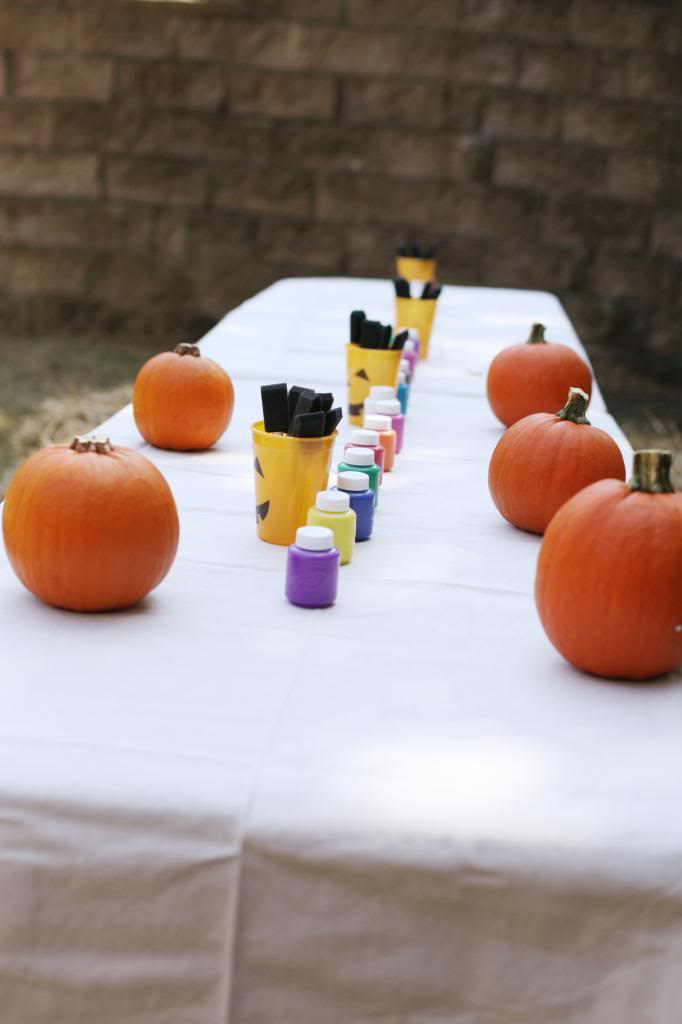 When we finally announced it was time to paint pumpkins, the kids squeeled and ran over.  Even the big kids.  It was one of those moments that I wish I had a video of…it was that cute. 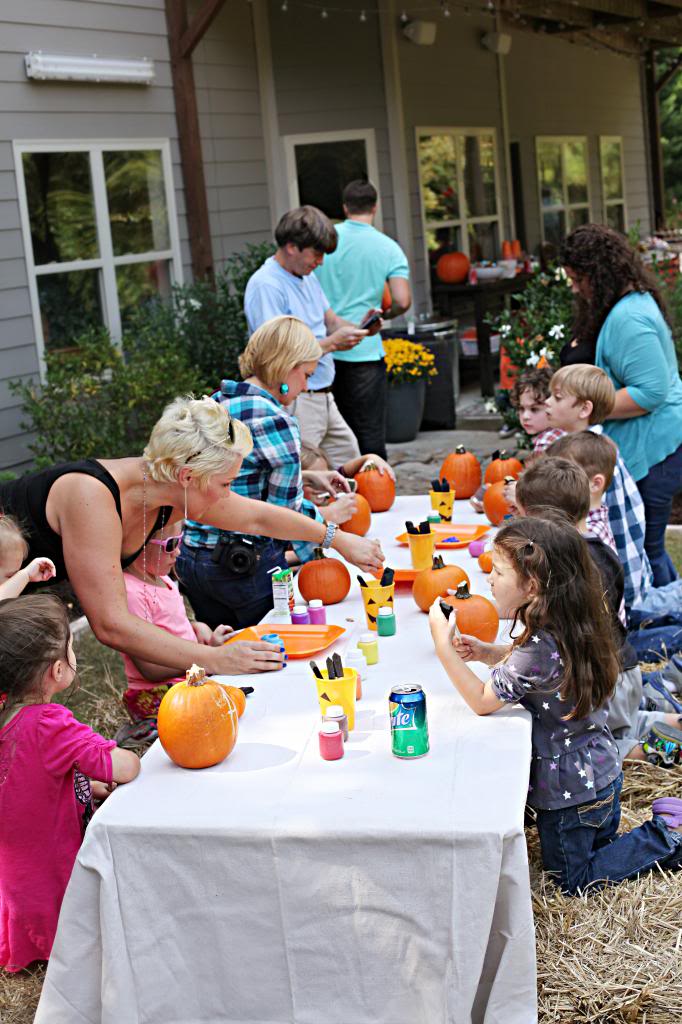 The parents were all around being super helpful….so I managed to see more and do less. Will was only interested in painting things blue.  Halfway through he told me that he was done and that he wanted me to finish it.  I just left it as is and now it is sitting on my kitchen table.  The little thing makes me unbelievably happy 🙂  This whole thing was basically for him anyway…so to see the little orange and blue creation is just a reminder that all that work is worth it…every.single.time. 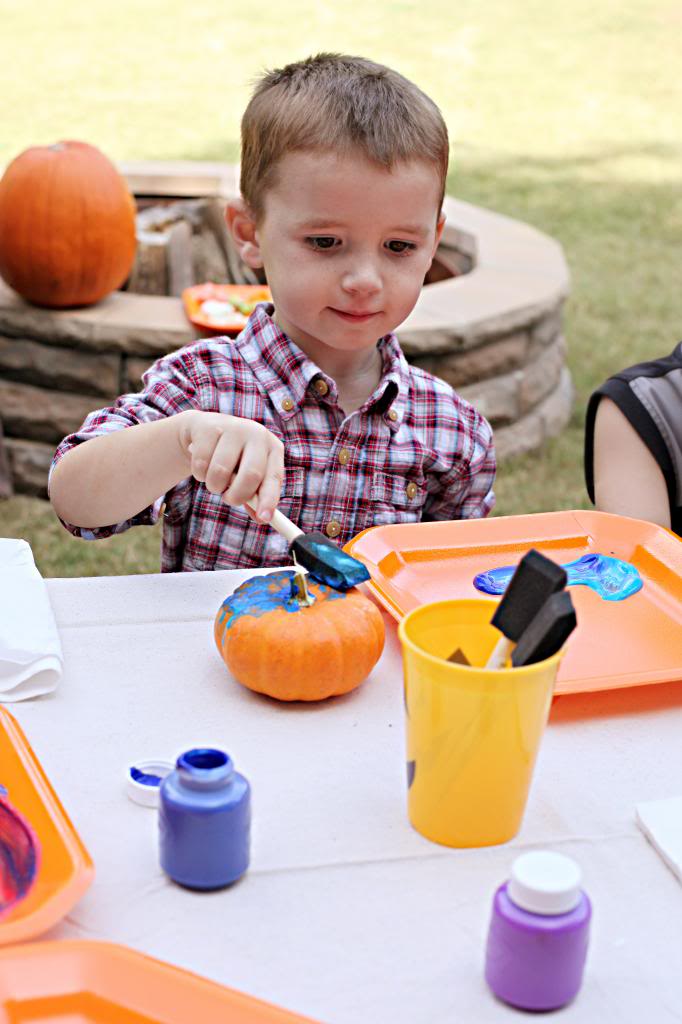 I should probably mention that during most of the party the husbands were all playing basketball.  I think they were pretending that they were 17 again.  Afterward Jeremy told me that he wanted to convert the tennis court into a more all-sports court.  I get it…but that just sounds like a lot of work.  I guess we will have to wait and see if that ever happens. We did manage to get a couple family photos.  This was the best one…no kids were crying or eating (oh wait, that’s M&M’s in Will’s hand…maybe he was eating).  Overall, it was a really fun time…and the ladies were huge helps to me getting ready (thanks y’all!) so from a party-throwing end, it was our most successful shindig to date. And honestly the best part was that we actually got the back cleaned up for the party (did you see the border and mulch?! more on that later!)…so it was nice to have the patio ready for fall.  C’mon autumn!  I’m ready for cooler weather! Who’s with me?!