Wood floor week continues!  We are recapping our experience with getting our hardwood floors refinished and it was such a big exciting development for us.  Refinishing our floors was a very expensive and huge update to our home but in general, we could not be more happy about the final result.  It was a big investment but one that has already made us feel like this house is so much more OUR home.  Yes, I know that sounds crazy after living here for so long but it’s still growing on us. 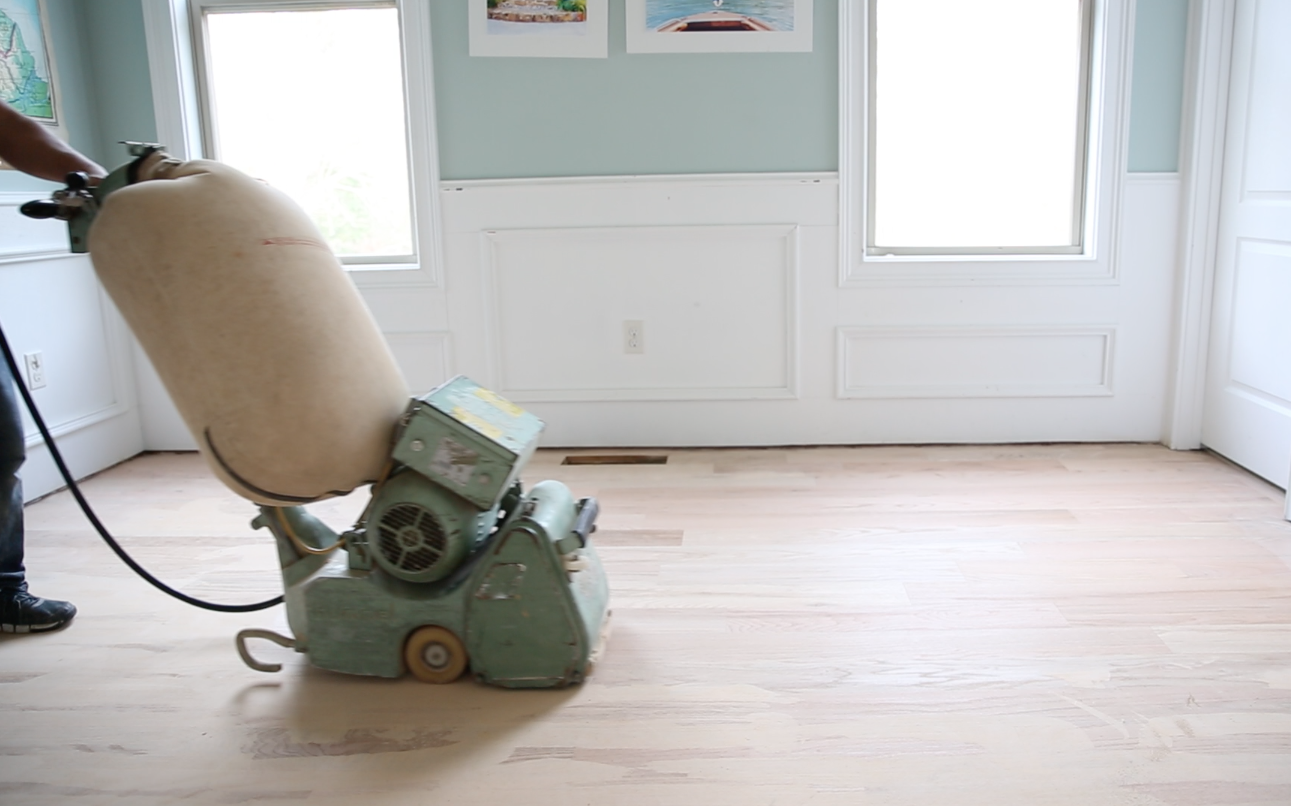 That being said – we had a lot of hardwoods and a lot of them were very orange.  In most photos, I photoshopped the orange tones down because they were so aggressive.   In real life, they were everywhere and they took no prisoners. Especially in areas of artificial lighting, they appeared even more orange.  This is our upstairs hall. And they lead from the stairs down to our bedroom and all the upstairs bedrooms. From the upstairs, you can see a lot of the first floor because of the balcony.  The downstairs flooring has the same matching hardwood color. The stairs were like steps to Orange Heaven.  I mean….Jeremy is a Tennessee Vols fan but even this was a bit much for my main squeeze. Not only did we have a lot of orange flooring, but the posts and the railings all were stained to match. The plan was to get rid of the orange color completely and get a new stain color that would last and be a good fit for our style and our life. The first step was picking out a new color stain.  I walked you through our process in this post.

The second step was clearing everything out of the house.  We paid for a couple members of Diegos’ crew to help us with that.  We knew that I wouldn’t be able to lift some of the heavier pieces and Jeremy couldn’t do it solo. So the color wasn’t the only reason we wanted to change the color.  There were other issues as well.  I had even created a pdf document outlining all the reasons that justified spending the money on new floors to Jeremy.  Yes.  I am a nerd that creates pdfs about hardwood flooring.  But really the main problem wasn’t the flooring.  We were both on board about the fact that it needed to be done.  The problem was that we didn’t have a floor guy yet.  And no matter what we had to stick to a budget of $4000 for the whole shebang.

Here are some pictures from that pdf.  It shows the flooring in the living room that was weaved in.  Those repairs were made before we ever lived here.  It had to be covered with a rug but you could still feel the flooring differences! It also showed the bowing near all our doors.  This was from being vacant and from water exposure from before we lived here.  And the damage in the kitchen was just wear and tear from years of not having a rug. I mentioned that Diego met our budget ($4000 for all the labor which also included two guys to help us move stuff out and back in!) and we would cover materials…it seemed like a very fair deal.  We just were excited to be able to get to it!

We moved all our necessities into the basement (our temporary living situation) while the guys got to work.  They first popped all the quarter-round trim off the floors…. And then the sanding began.  The sanding would take a very long time because we had so much square footage. They used a big floor sander for the majority of the space but then had to use a smaller sander for all the edges. The banisters and posts all had to be scraped by hand!  This guy was up a whole story!  No, thank you. After the first round of sanding, they had to fill all the cracks.  This meant that the entire floor had to get filler scraped into all the nooks and crannies and between each board.  It was a very tedious job but it makes such a difference in the end result. After the filler was dried, they went back to the sanding.  Each floor board was sanded down in incremental stages with higher grit sand paper until it was perfect!  If I remember correctly, the grits that he did was 36, 60, 80, 120. Then we headed to the store to pick up our stain and finishing products.  Diego did one coat of emulsion and then three layers of matte poly. We finalized the mix of the stain and did one final test with Diego.  Then he was ready to go.  We actually left the house during the majority of the stain process so I don’t have any photos of that….we just didn’t know how strong the fumes would be during that process and didn’t want to affect Ella.  That evening, we came home and were able to stay in the basement while Diego continued to stain the kitchen and thankfully it was fume free (I will say that probably had to do with the fact that we were in the basement which runs on a separate unit and we had sealed off the basement to the upstairs so I don’t know how much of that was luck or what but in general, I think I would have made a back up plan if I could do it all over again…just.in.case.) The next day, Diego started the finishing process and it was AMAZING.  The floors just came to life! We went with a waterbased poly (Bona Traffic HD) that would not alter the color….and the fumes were very minimal.  It also had a matte finish! The process was very long and tedious and I know that our delivery guy was confused every time he came to the front porch and there were new things going on….but SO WORTH IT.  The floors turned out exactly how we wanted them and I can not wait to show you the end result! That being said – I definitely learned so much about refinishing floors during the process of watching Diego.  Jeremy even suggested that we refinish the sitting room floors ourselves (eeeeee!) so maybe in the next year or so we will be brave enough to tackle that!  The only question is…..what color!?

p.s.  Looking for your own perfect stain color?  Here is the post where we wrote down ALL the tips that we have about how we found ours and you guys were so helpful in the comment section!  Thank you!