September was a long time ago.  It was when we were a three person family instead of a four.  That seems ages ago because now it’s weird to think about not having Weston here every day.  It’s like he’s been here forever.

So when I think about not finishing one vital thing in the kitchen since September, it does seem a little slackerish.  A little half-rear-ended.  a little lazy.  I’ll just go ahead and tell you about it.

We had a down-draft stovetop.  And nature dictates that hot air rises.  Therefore I hated the down-draft.  It just didn’t seem as effective as I liked.  Then we found a UBER-discounted gas stovetop.  It just seemed serendipitous that we have a gas stovetop and a vent hood over it.  My darling Jeremy built a great surround for a regular over-the-stove-ventilation hood.  It looks still very custom.  So we went from this: You can read about that transformation here.

Some of you may remember that the solution to the overhead ventilation problem was to take the vent pipe and take it up into the overhead cabinet and through the wall into the room on the other side (which happens to be the laundry room). Our luck continued because in the laundry room, there is a bunch of cabinets that run along one wall.  And since that set of cabinets really isn’t boasting much functionality on top…it seemed like the logical choice to run the vent pipe along the top of them to the exterior wall and then either build a bulk-head or some kind of ‘blocker’ to help hide the pipe.  WHEW.

The crazy (read: lazy) part is that we vented the hood up and into the laundry room and then stopped there.  We knew that eventually we would vent it outside but it got pushed back…what with having a newborn and all that.  I didn’t complain about it because I knew that when Jeremy got the kahoonas to climb on a ladder (we are both REALLY afraid of heights) that he would tell me.  Plus, every single time I cooked something, the heat from the vent was only about five feet from a fire alarm which would inevitably sound the siren and it was more than enough reminder to both of us that this project was left unfinished.  Fast forward seven months and now that we have started the laundry room makeover, we both knew it was time to tackle this vent issue. 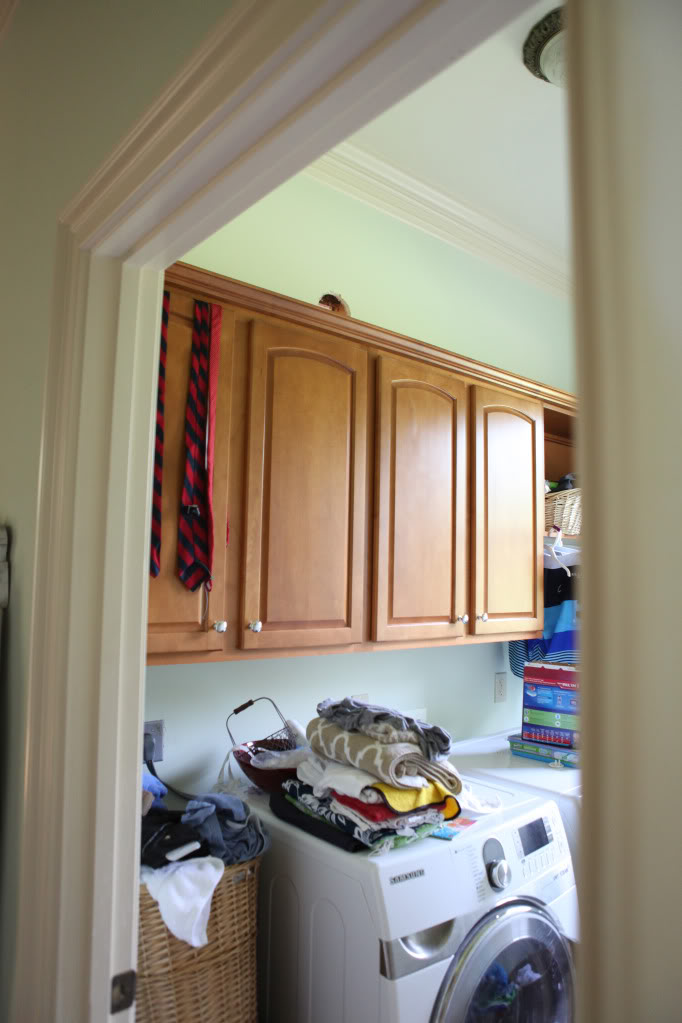 The first thing that we did was buy some materials.  Here is what we needed to complete this project…

Total : $36 and a little more for extra baggy underwear 🙂

So the duct from the hood was already coming through the wall and into the laundry room.  So the first thing we did was figure out the right configuration of the elbow duct to make it extend along the wall.  After Jer got it twisted the correct direction, he fit it over the existing duct and then I held it in place while Jeremy taped it together.  The tape isn’t necessarily for it to stay together…but it does help with stability.  The main function of the tape is to help keep hot air from escaping the seams. Then the shortest duct (the 6″x6″) got slipped inside the elbow…it’s like one of the connectors to make everything more seamless). Then Jer put the longest duct over the end and ran it all the way to the wall.  He just held in place while tracing the edge. This is where a little math comes in play.  You want to find your studs and make sure your hole doesn’t run into one because then your pipe can’t go through to the outside…so measuring from both walls, at 16″ increments, you should be able to calculate if you have a stud.  We also triple check with a stud finder (which we have found sometimes to be inaccurate so this is never our first choice) and a couple nail holes. Then using a drywall knife, Jer cut out the hole. 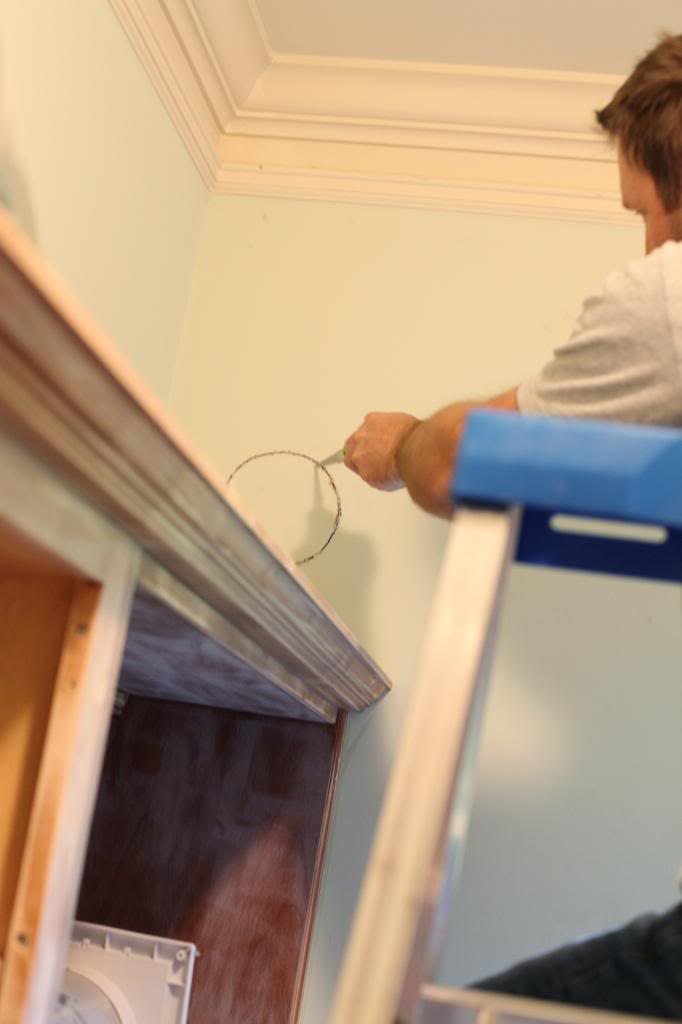 See that stud?  Whew.  It was right on the edge so it worked out.

After we removed the insulation, it was time to drill through the house.  EEEK! Jer used his new tool (a Milwaukee hammer drill) to drill through the exterior boards and siding to mark the edges of the circle. But not as scary as this… Yup…after marking the holes, he was able to get the blade of the jigsaw inside the boards and cut out the hole completely. And this was done 24 feet in the air.  That to us is like 24 million feet of torture.  He might as well be doing stunt work on the side of the Empire State building.  But it wasn’t over yet. Then came time for fitting the exhaust vent hood in the hole and attaching it to the house with exterior screws. My man is so brave.  Seriously.  I would have just hired this out.  I’m such a chicken when it comes to heights that even watching him made me sweat. 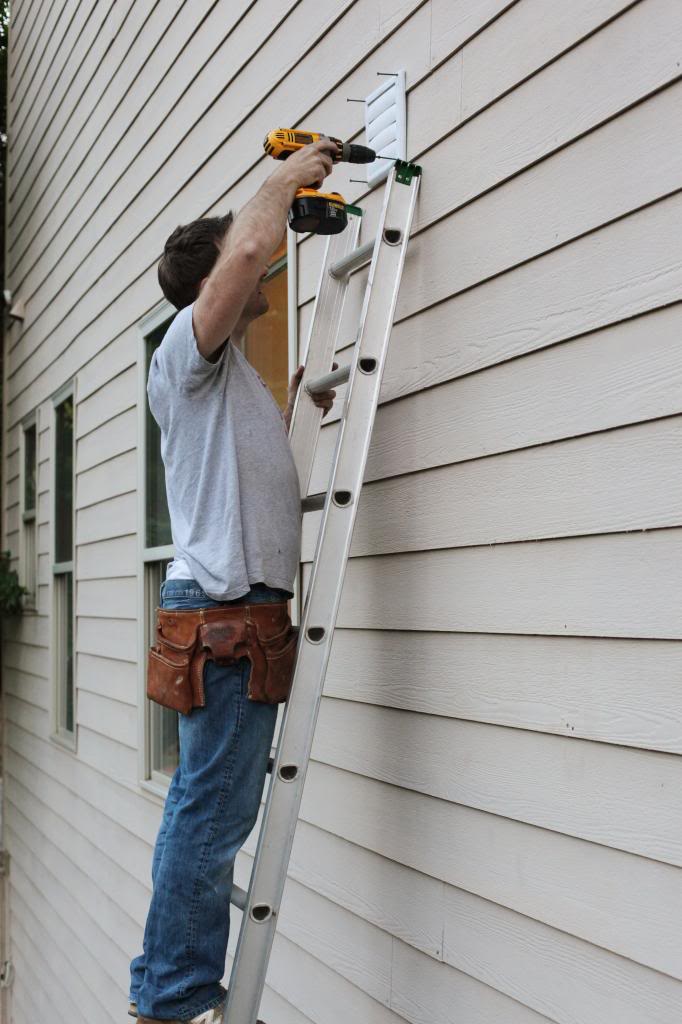 After it was all screwed in (the sealant is something we wrote into our ‘house painting’ quote so we knew someone else would take care of it in a couple days), we headed back inside. At this point it was simply a matter of cutting the longest pipe to the correct length.  We already had metal snips so that was easy. This is where that long pipe goes… And you put it in place and then tape the seams. Since we had the foil tape already pulled out, we decided to switch up the tape in the first part of the hood.  Some of you may remember the explosion of minds when we used duct tape on our ducts.  Literally.  There was some freaking out going on.

But like I said before…we didn’t have the right product on hand so we made do and thought of the entire thing like an experiment to see how long the duct tape would last.  Well the results of the experiment are in.  It definitely lasts at least seven months. It was still sticky and nicely adhered…not crumbly or flaky or dry like it can turn after long exposure to heat.  It does look white because it was exposed to the spraying that we did to the cabinetry…but despite a little paint ‘dusting’ we see no real change.  So now all those folks can sleep at night knowing that all is right in the world 🙂 Of course, both Jeremy and I are extremely glad this project is finally Dee Ohh Enn Eee.  It is so nice to be able to cook salmon and not worry about our laundry smelling fishy.  And my children are no longer gonna be screaming at the fire alarm.  And everybody likes a $36 project and extra large panties. So have you ever put a project off?  or did a project and experimented with a different product just to see how long it would last till you did it the right way?  Or perhaps you just wanna talk about your fear of heights and how it has kept ya from tackling something?