The kitchen is almostthere.  It feels so close that I could reach out my tongue and touch it…and let’s be honest, with my new backsplash, it’s very likely that I will be doing some secret licking in the future.

Just making sure you guys are still reading.

So in the beginning our brown-box of a kitchen was ok.  We had brown cabinets in our first house and we were fine with them…but…I really really wanted a white kitchen.  Jeremy and I are still both sold on the fact that this will probably be our long-term-we-raise-all-our-kids-here-and-pay-this-sucker-off home.  One day when all our kiddos are long gone, we will probably downsize to a more manageable place but we see us doing the long haul here.  And frankly, I wanna long haul in a white kitchen.  White kitchens feel clean and bright and happy to me.  What they don’t deliver on the ‘cozy and warm’ department, I think is made up for in the ‘photographs well’ department.

Anyhoo….here’s what it was before we moved in… 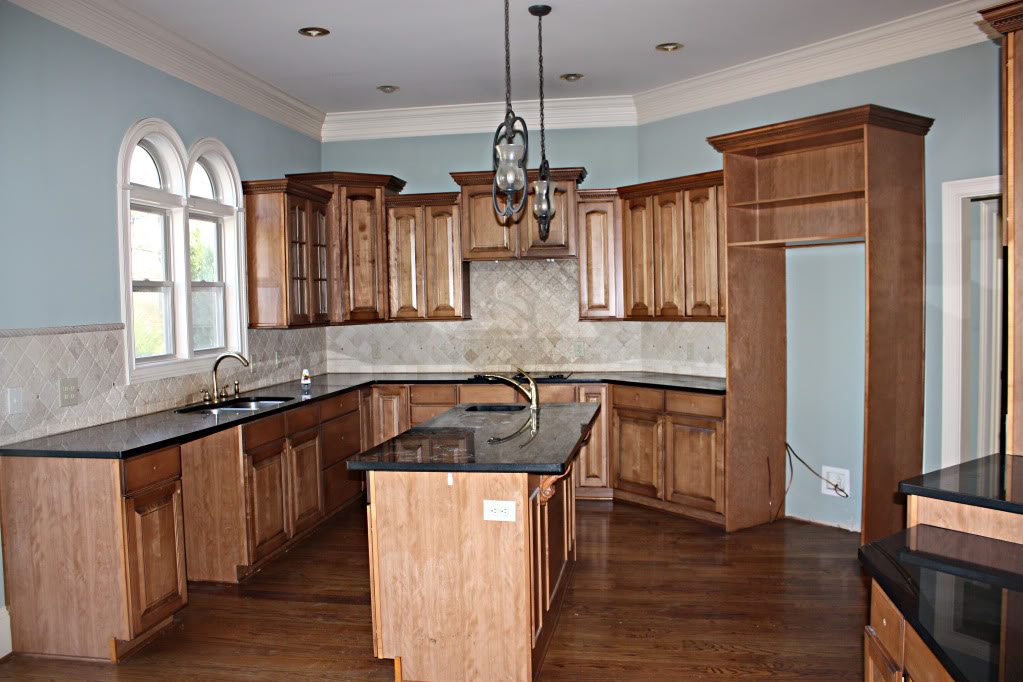 It’s been seven months.  And it’s not done yet.

Let me explain to those of you just joining in on our excruciatingly long kitchen fun fest.  We moved in and made some cosmetic changes…added appliances, switched out lights, and installed hardware.  But that was about it. Then we were going to attempt to do phase two…which included installing a vent hood, painting the cabinets, and replacing the faucets.  That was all fine and dandy, but then we decided to make the executive decision to not tape off the backsplash while we painted.  And we figured that since we were taping off the room for painting the cabinets, that we might as well paint the tan trim and the ceiling too.  It was the snowball effect on steriods and with Jolt Cola coursing through it’s veins. So far, we did everything on our list except the island.  More on that later.

But for now, I am marveling in the beauty of a crisp white kitchen. 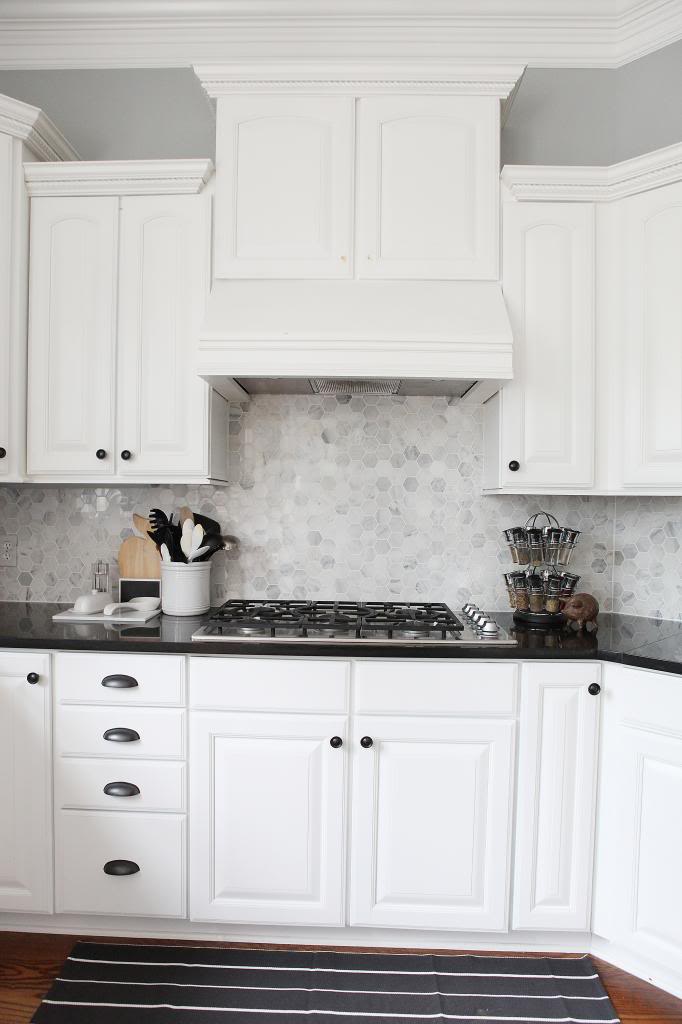 And yes, pretty much anything next to the tile looks like a million bucks.  Even my homemade art from ages ago and some discount accessories look expensive.  I am OBSESSED with the white ceramic lidded container…anything that is white and has that filigree cut outs is my jam.  It’s better than bacon.  And that is saying something.  (oh this one is from Michaels!) The new faucet is marvelous.  I love that it has the sprayer right in the head…it makes clean up easier. Okay – so now for a few more before & after pics… The only thing that sticks out at me (besides the unfinished projects we still have to do in here) is the lack of color.  I think I might bring in more color but in a seasonal way with accessories…like hydrangeas in the summer with fun blues & greens in dishtowels, accent dishes and frames…then in the winter, I can do reds and greens for Christmas or tans and warm yellows for fall.  Thats how I decorate….creating a really neutral backdrop and then accessorize with pops of color.  I’m a jeans and white tee shirt kinda girl that likes a colorful necklace…not a floral pants with a zebra top kinda girl.  I’m just not cool enough for that. 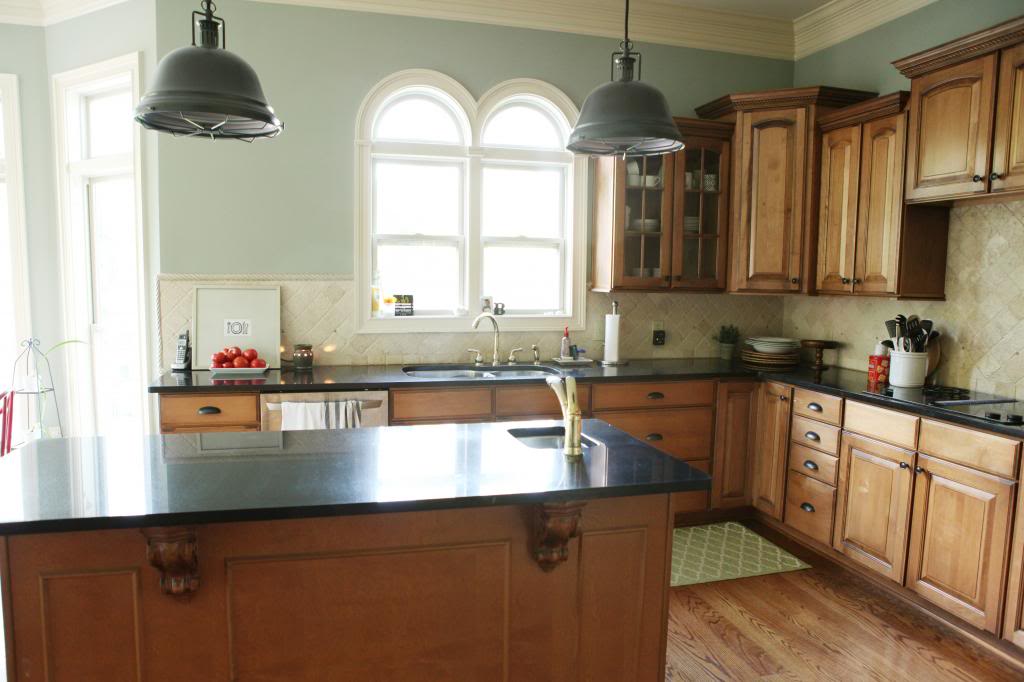 This might sound crazy because we have done so much DIY projects in the past but I am really REALLY proud of this particular space…not just for how it turned out but because the conditions were crazy hard.  It has taken us seven months because Jeremy was working across town, driving his two hour commute home, playing with Will and eating when he got here, then working on the kitchen till midnight.  And I was helping where I could…like sanding the cabinets and climbing my full-term-pregnant butt up on the counter to install the backsplash.  Oh and did I mention we lived without a kitchen for six weeks?  with a toddler?

I’m not humble-bragging…I am straight out bragging.  We did awesome.  Sure there were hiccups along the way…sure there were many tears and complaints and drag out fights from stress between Jer and I…but we did it.  WE DID IT.  I am so freaking proud of us…because we are normal folks doing what I think looks extraordinary. BUT there is a lot more still to do.  We have the last thing on our PHASE list….the island.  I mentioned before that we painted it a darker gray color…but it started chipping right away (the culprit?  didn’t we determine that it probably was too long of a wait between the primer and the paint? lesson learned.).  Now we are gonna move forward with a plan that we’ve been mulling over for a long time…it involves building a small set of shelves on the left end and adding cleaner lines in the trim and corbels. We also need to do some touch up paint.  Some of the cabinets never got fully done…it’s gonna be a easy job to paint.  It’s not gonna be easy to keep Will away from them while they cure.  But I guess that is what Grandmas are for…hint hint 🙂 And last but not least, we need to install some open shelving to the left of the window.  We decided that we are gonna do two shallow shelves mostly for decorative purposes.  We are also gonna use corbels that match the island ones (although in a smaller size). So that’s where we are at…fun stuff…

How bout you guys?  What are you up to?  Any DIY projects?  Any new obsessions like my white cut-outs?  Not to be confused with white cut-offs…nobody wants to see that on me….my spanx would show 🙂