One of the best parts of blogging is the conversation.  You didn’t realize that we were having a conversation?  Well….you are talking to the homeschool kid and it’s not gonna kill ya rep.  And no, you won’t be better at spelling bees.  Or be required to wear culottes.

For the most part I talk and you listen….err read….surprise surprise that’s how blogs work.  But there is the long-forgotten comment section….and you guys maybe don’t realize that I have read EVERY.SINGLE.COMMENT ever.  Including all the ones you left about the foyer conundrum. I had asked you guys your opinion….which yes, I REALLY want.  They are each completely valid, worthy and express a different way to look at things.  But it is also kinda like opening a can of worms.  It’s kinda like opening a whole bunch of cans….maybe even like opening a worm canning factory.  Its tricky because you don’t know what will look good in a particular space ONLINE because it’s not real life….and it still has to translate for our family and for our reality.  On the flip side, our real life involves taking pictures of beautiful spaces and sometimes a finished space photo can be like a calling card….or get us more opportunities.  It’s a weird awesome life.

So thank you for responding.  I really do want you to know that if I didn’t take your suggestion….it’s not because I didn’t see your point….it’s just that I’m going with my gut on this thing.  What stuck with me the most is that someone said – wow I didn’t know your foyer was so big.  And for whatever reason….I realized that pictures just don’t do something justice.  And also I suck at giving house tours….so y’all don’t see this space all the time.

That means I would need to continue with part of the plan….sprucing up that weird alcove nook next to the stairs and getting a new rug but it would mean that my beautiful round table would be nixed.  So Jeremy moved it out and I was left with this…. Still hate the leggy table in the alcove and decided that if that would be the center of the attention, then a custom hand-built piece by me would be necessary….after this baby is born 🙂  The inspiration for the piece was one of these three…. The one I liked best photoshopped in the space was this one….(and you can see I tried out a new color in that little alcove to see if it would punch us all in the face a little….in a good way.) And then came the big decision….what rug?!

I had already mapped out what size I would need – 8×10 for the foyer – and I decided that I needed certain things out of this rug for it to work long term….

The first one I found I was immediately in love.  Here is the link.  The navy with the gray undertones and the lots of interest.  BUT it was $800 for the 8×10 (I figure I could find a coupon for 20% making it $640) but honestly I think I might like this one better for my living room.  Plus…it wasn’t as warm as I preferred…meaning that any dirt tracked in from the front door would be really evident. The second option is very Joanna Gaines in my mind.  Here is the link.  A little southwestern with lots of bold pattern and a basic color scheme.  The price hovers right around $550 for a 8×10 but I don’t know that it’s my style exactly.  I like it….but worry that I would feel like it’s too trendy for my house. Option three is a more traditional style and I love how knotted wool rugs always clean up well.  Here is the link.  This was definitely closer to what I wanted in this space.  It’s still traditional to go with our woodwork and warmer undertones to hide dirt. I liked that it had a little updated feel in the pattern (it’s categorized as an oriental rug but I see a little southwestern flare to it).  The only reservation is that I thought it was more royal blue than navy and I really needed it to be on the navy/charcoal side. Last but not least is my favorite.  I found a vintage inspired rug that is only $417 for a 8×10….and it fit the bill!  I hope it just turns out in real life the way it looks online and in the reviews!  Here is the link.  It has the navy blue and the warmer brown tones….which will hopefully hide the dirt.  It has the traditional look that works well with my house…and because it comes with the ‘worn’ look, it won’t wear unevenly if my kids do their best.  I’ll keep you guys up to date on how it looks in the space! 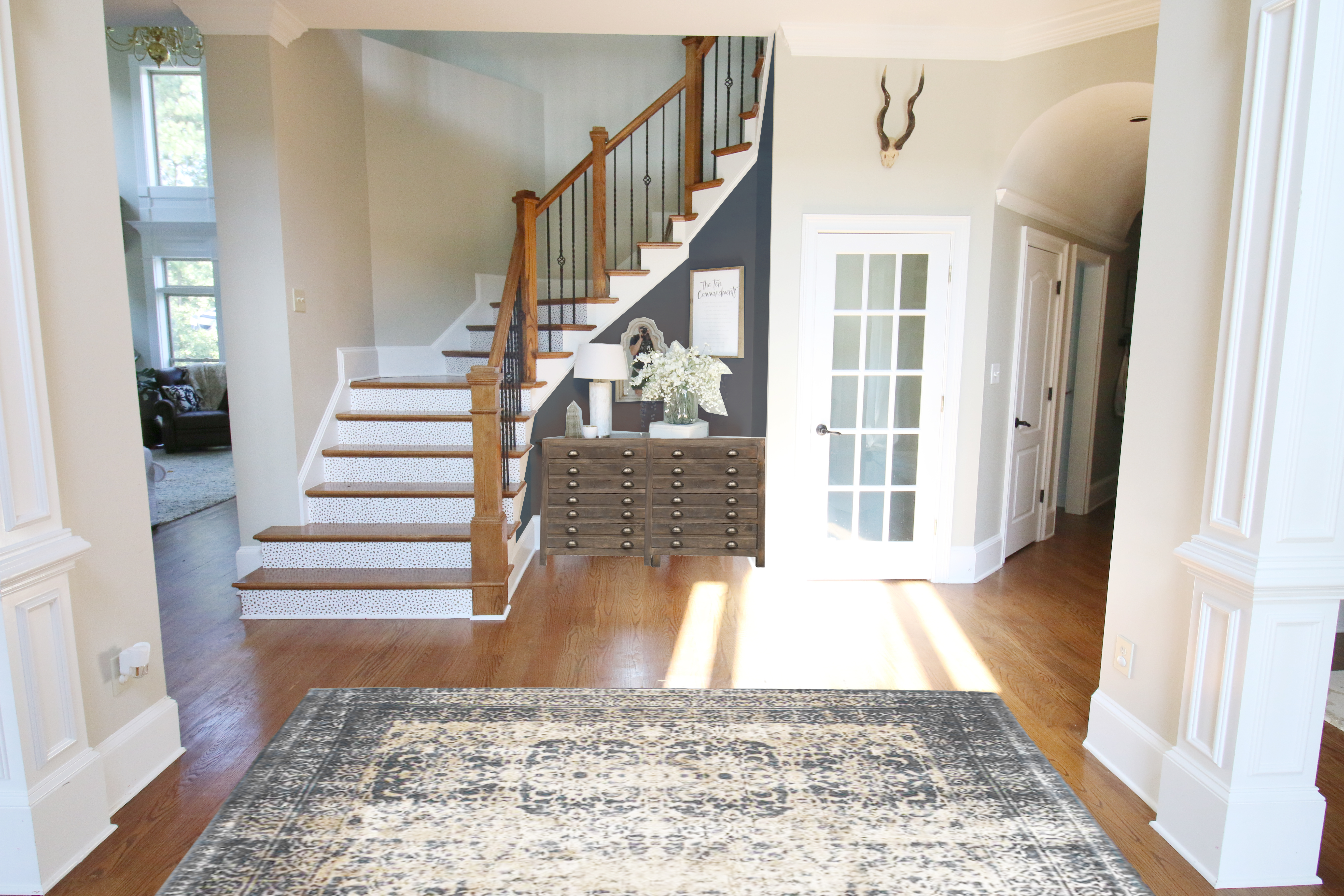 And so now I gotta plan out how to build a console for that alcove so that it has an angled back.  Should be a little tricky at first but once I have the frame down, it will be easy.  I say that.  But watch it take me like 4 months to actually do it 🙂