Y’all ready to jump back into some heavy DIY?  How about how to install cement board for tile?

You don’t actually have to lift a finger….err….maybe one just to scroll but it’s relatively low energy…. 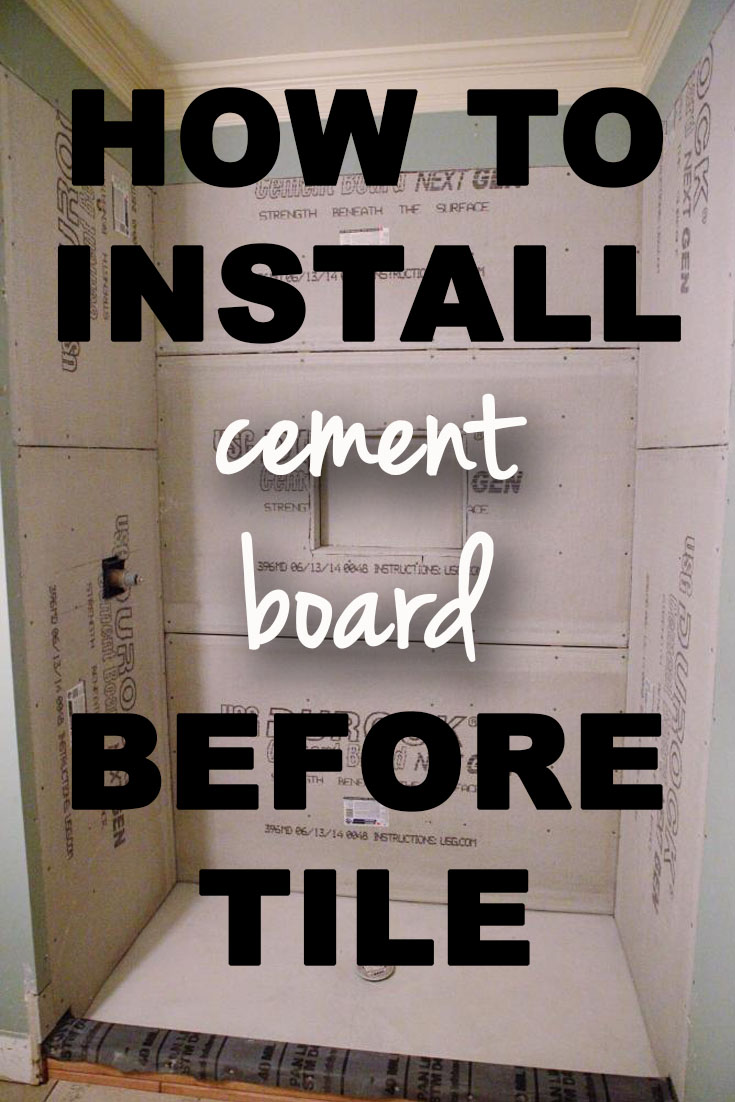 I’ll take that silence as a resounding YES to the DIY post.  I am sharing the journey that we took to get our bathroom in guest-ready shape and let me tell ya…this was probably the hardest reno we have done so far in terms of ‘what-the-heck-are-we-doing’.  That’s right.  Majority of the time we were googling our pants off (that sounds weird) so that we could get the answers to our DIY questions because this was the first time we were tackling a bathroom and messing with the really functional parts of it.  Like most of blogville, our DIY projects are mainly cosmetic in the past.  There are very few true DIY bloggers out there…people that tackle everything from electrical to drywall to flooring.  I mean…do you know of any?  Not just designers…but tried and true hands-dirty bloggers?  People…I need names because I only have a couple of them in my reader and I need more.  I would eat that stuff UP.

Anyhoo…I’m saying all that because this was a huge project for us.  We have never installed a shower and we were under a huge time crunch.  You read in the last post that we hired a plumber to move the drain (confident now that we could have DIYed that) and move the controls (also 85% sure that this isn’t as hard as we thought after watching him work) and then install the shower pan (totally could have tackled this too although I am glad we watched for an example).  So overall…hiring out was a learning experience and one that we are thankful to document because now we feel ready if another bathroom needs fixing.  Jeremy also moved some studs around and now we have a niche roughed out in the far wall. 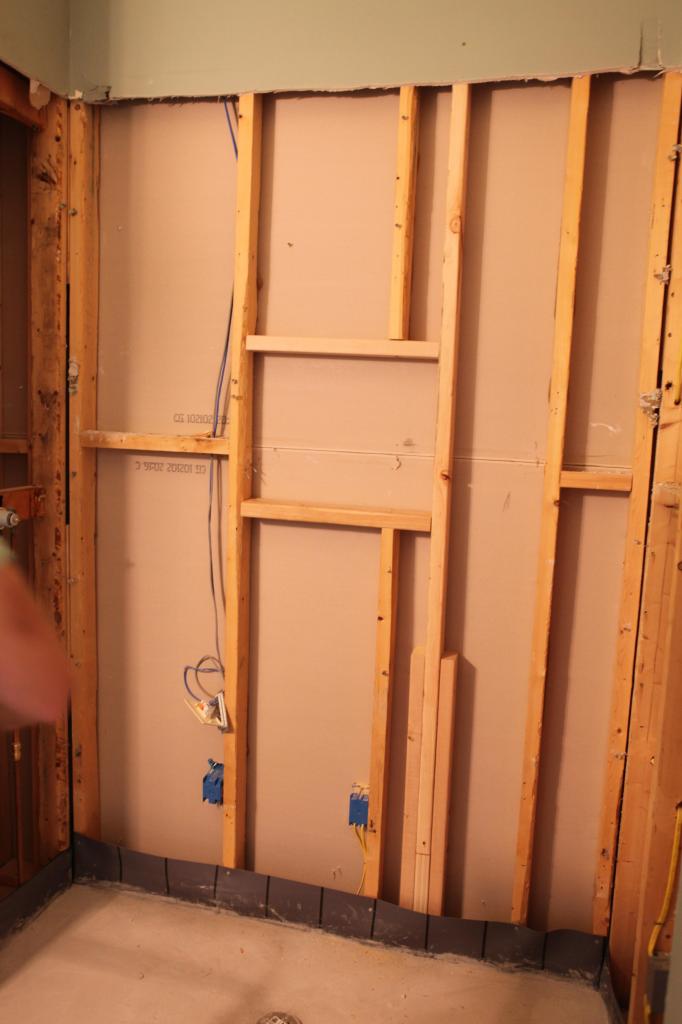 I’m just thankful it doesn’t look like this still….because that would have been a possibility if the deadline wasn’t breathing down our necks…. 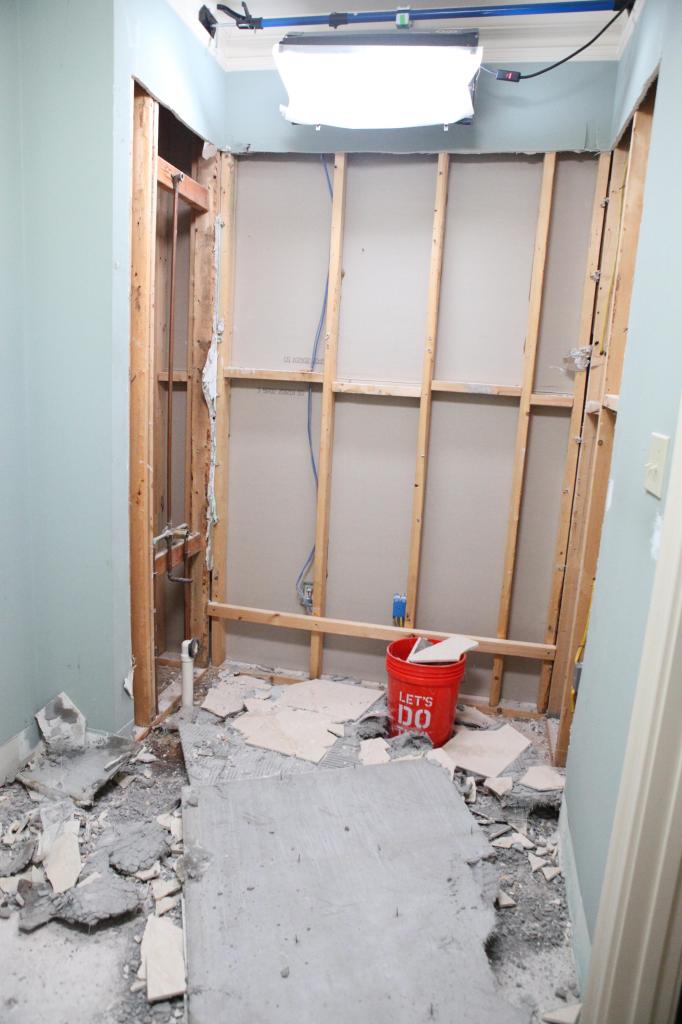 And just for those of you getting itchy looking at all that dust….this is what it ended up looking like…..go ahead and breathe in a sigh of relief now… Well, today we are gonna talk about boards….cement boards to be precise.  This might make you fall asleep….you’ll be that BOARD.  sorry I had to 🙂

Under any tile surface, there needs to be cement boards or backer boards.  There are different types (Durock & HardiBacker are the main two types) and we decided on HardiBacker for the floor (because it is thinner and we would prefer to not have a huge step from the carpeted bedroom to this tile floor) and then Durock for the shower (it matched up the drywall and although heavy, it is less expensive).

So this is our process for prepping the floor.  We first tape off any doorways and carpeting because we don’t wanna ruin it.  And then we have to cut cement boards to fit the space.  We had a bunch of random leftover pieces of HardiBacker and we basically created this giant jigsaw so that we had the entire floor covered and didn’t have lots of waste leftover.  Also…this saved us some moolah which was really helpful. 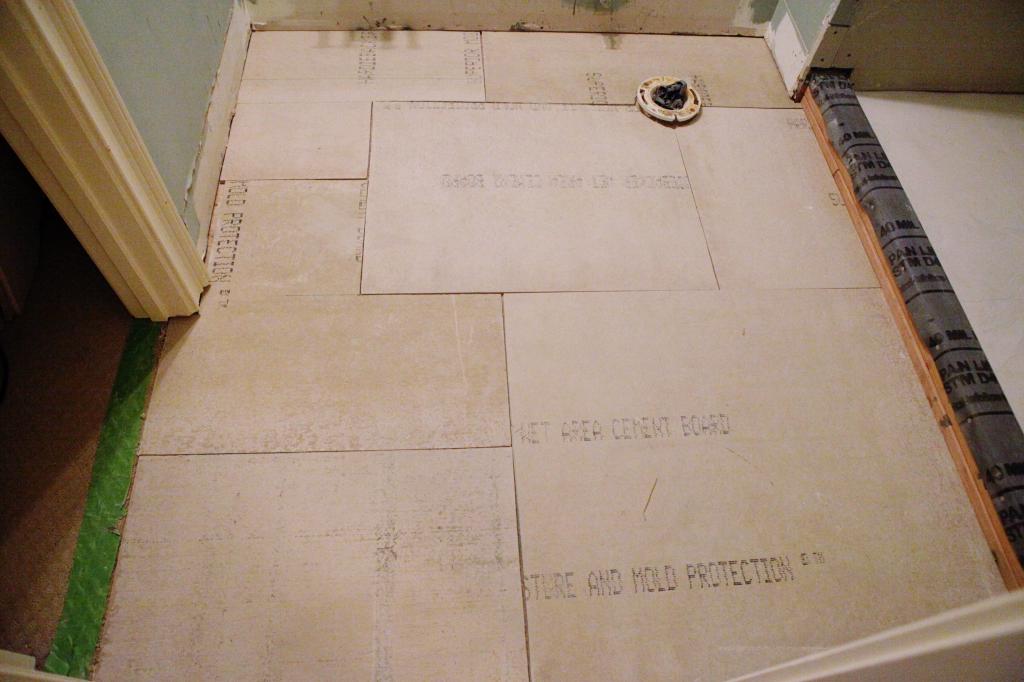 After Jeremy had them all cut and ready, it was time to pull them all back up and put down some adhesive.  But before we did that, I labeled each jigsaw piece with a number and an arrow to show exactly the direction it should go for the best fit.  Jeremy also bounced around on the subfloor to see if there was any squeaks that needed to be put down. 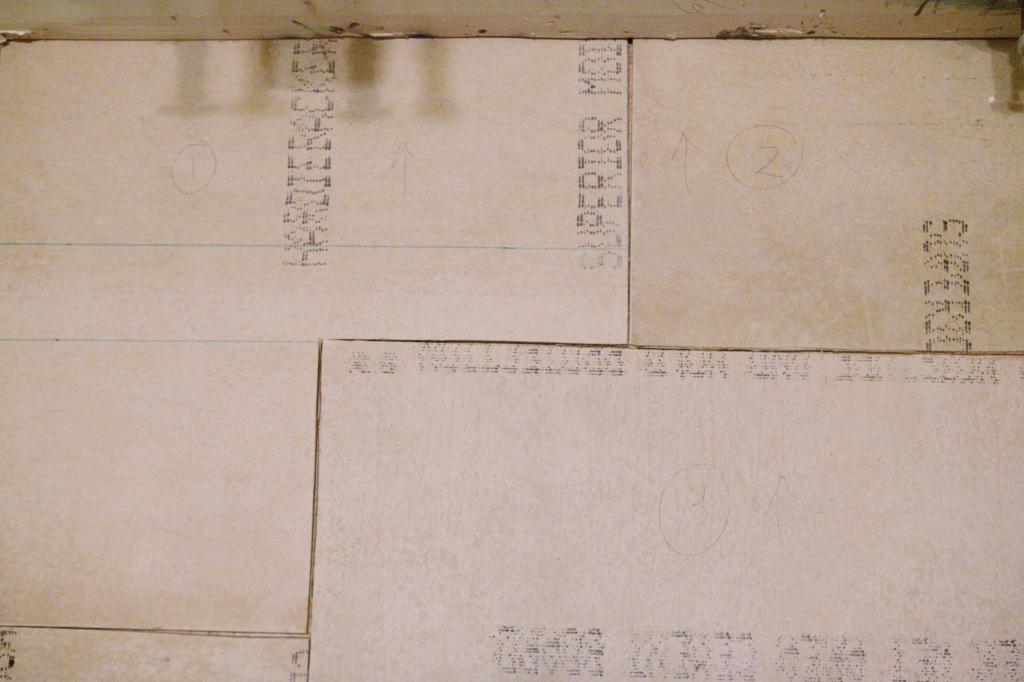 Speaking of adhesive….this is what we used.  We already had some leftover from a previous tile project so that made it simple.  This is an adhesive called mastic and it shouldn’t be used for tilling a shower but is great for things like this no-moisture floor. 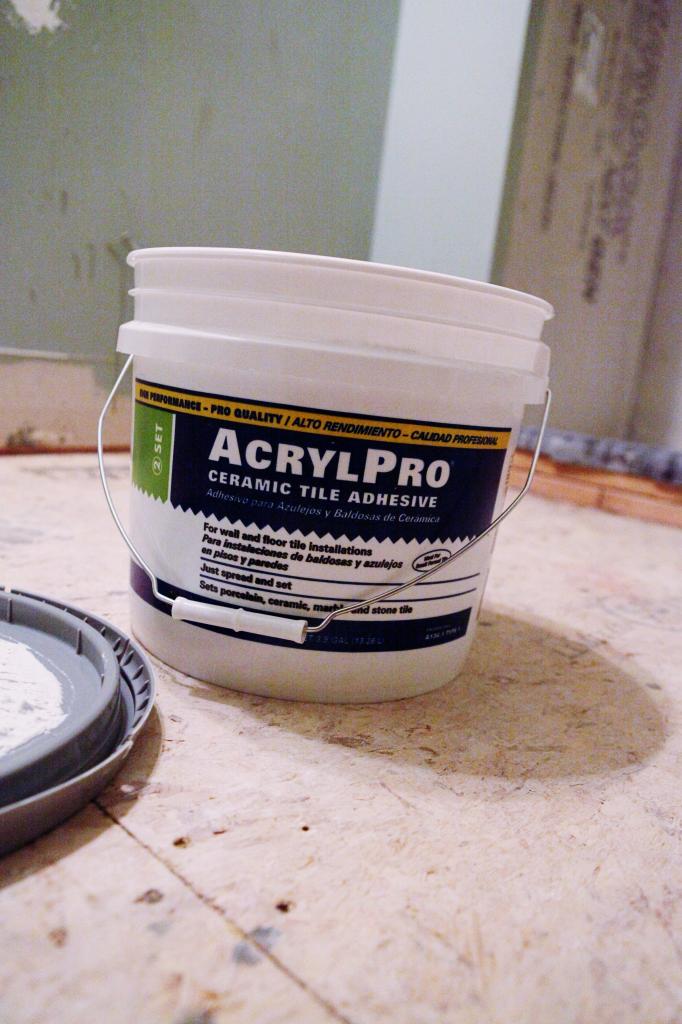 You just spread it on and then using a notched trowel, you can create some mad grooves for maximum adhesion. 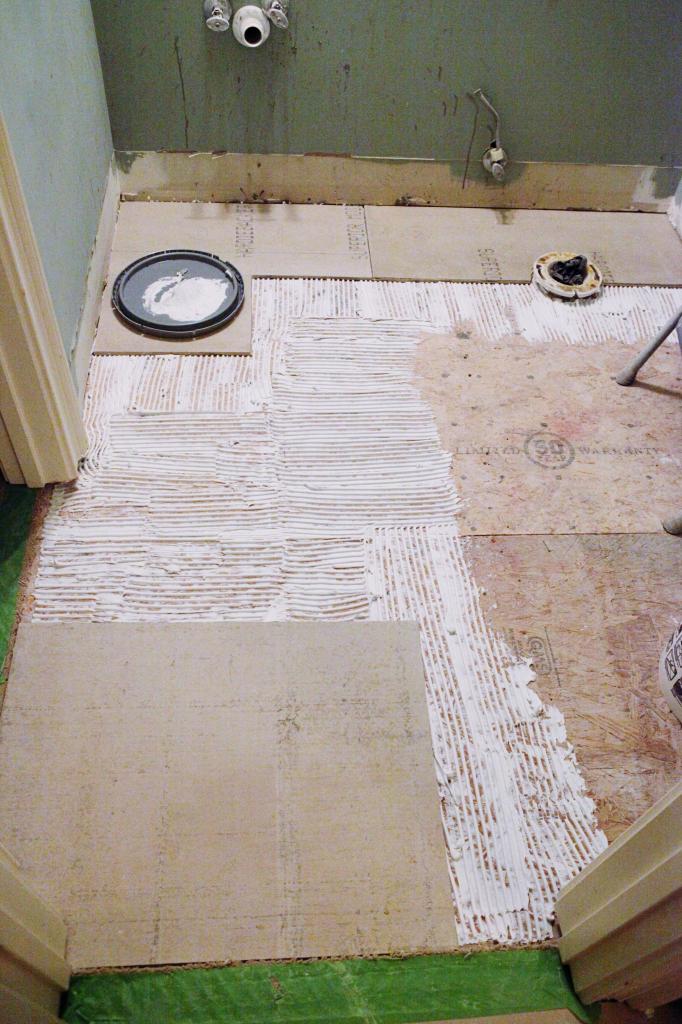 Once all the boards are glued to the floor, you want to set them with concrete board screws.  They sell these in the tile section.   You want them spaced evenly (about 4-6 inches apart for the best most secure floor).  You will get a blister on your thumb from doing all screwing….be warned. 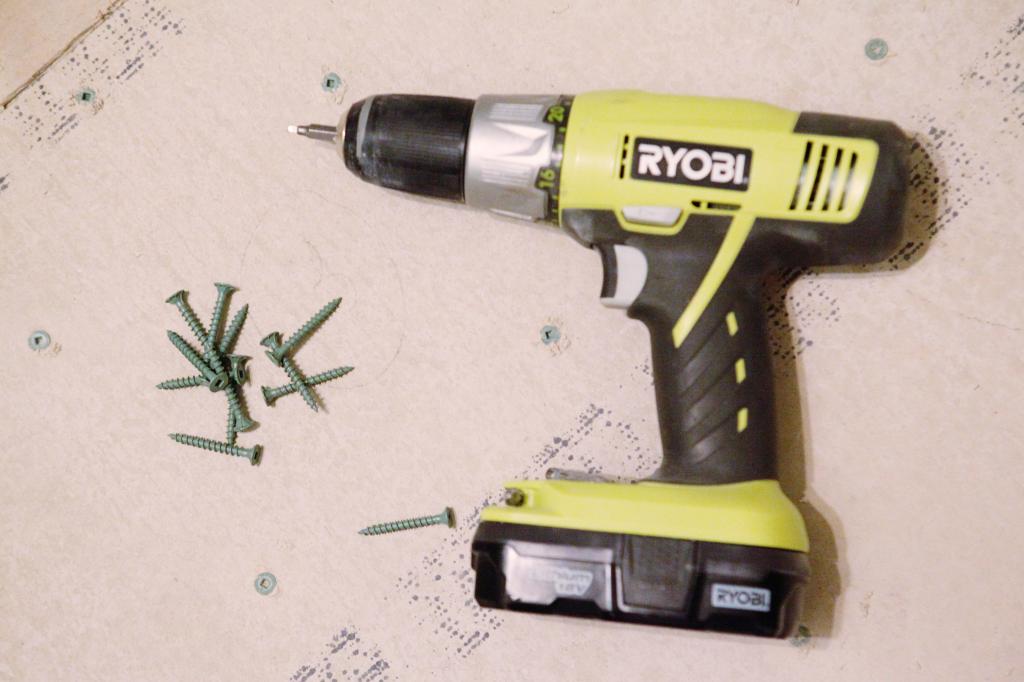 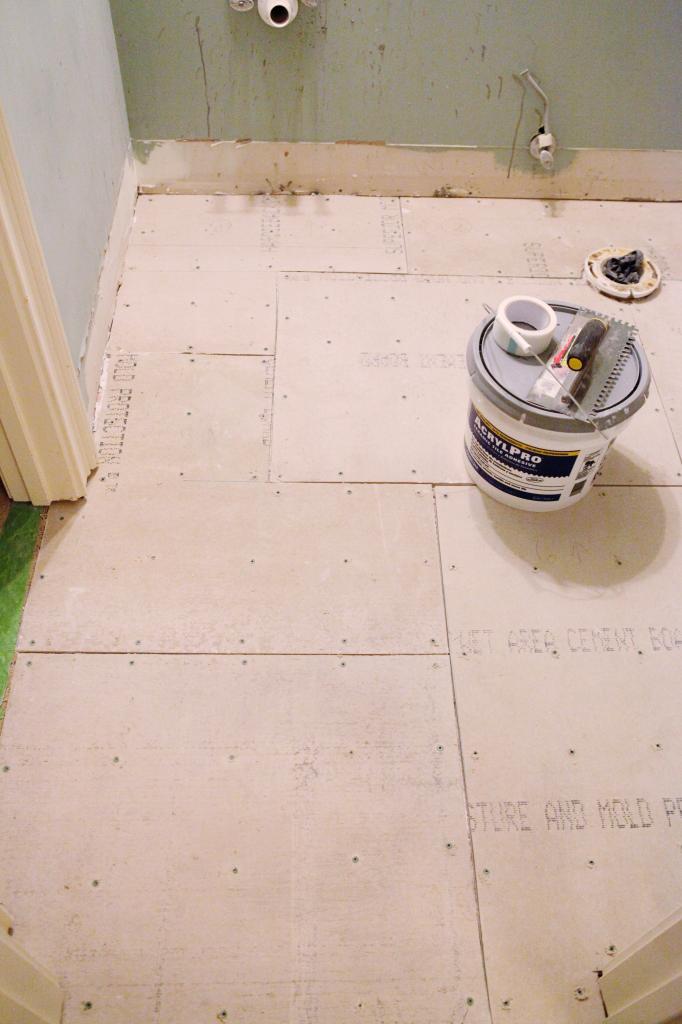 Next we had to fill the cracks.  (mandatory butt joke here).  I’m gonna walk you through this because it is super easy. 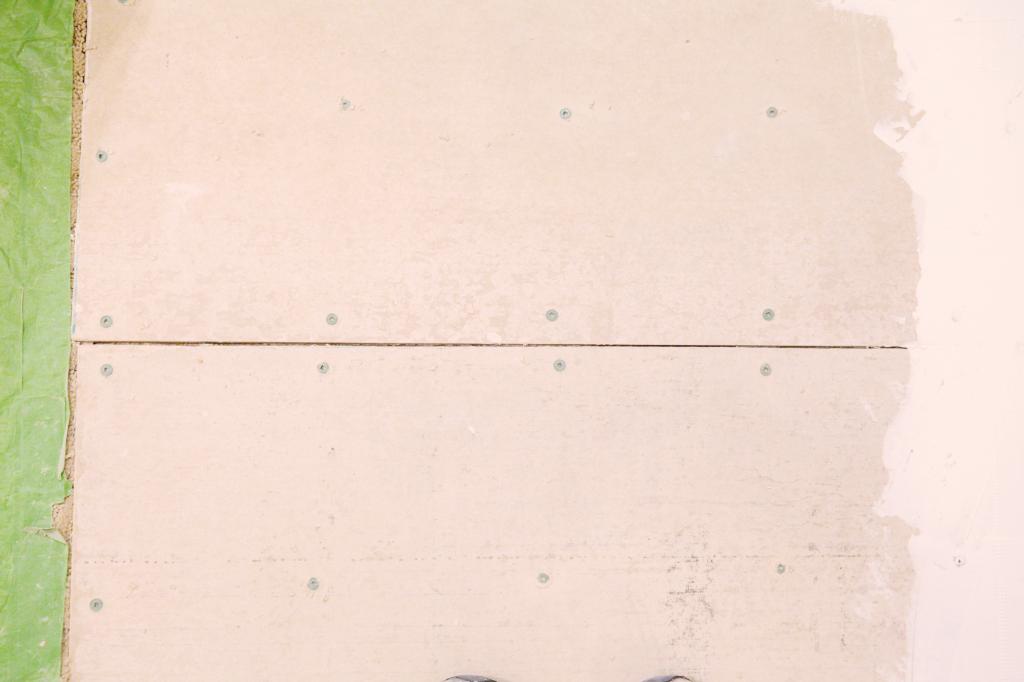 First you need a trowel.  It’s best if it has a flat edge.  Smear your crack with your thin set.  (seriously, am I the only one laughing?) Next you need to break out the mesh tape.  It’s easy to work with but it will basically bond your boards together and make them one big surface…preventing future cracks in  your tile!!! 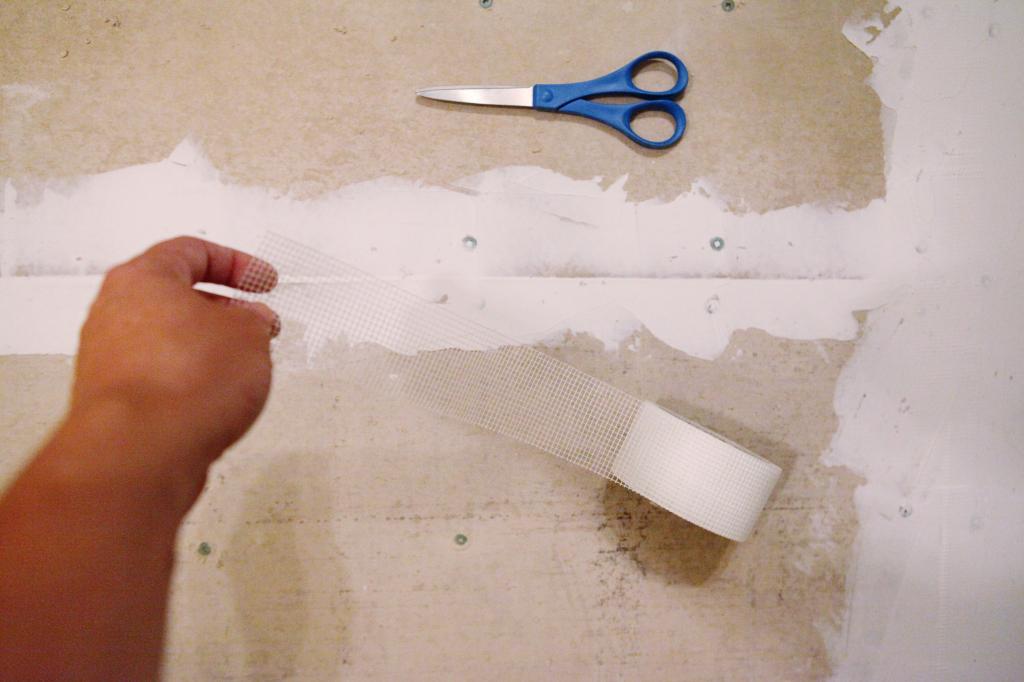 Cut your length and embed it lightly into the thin set. 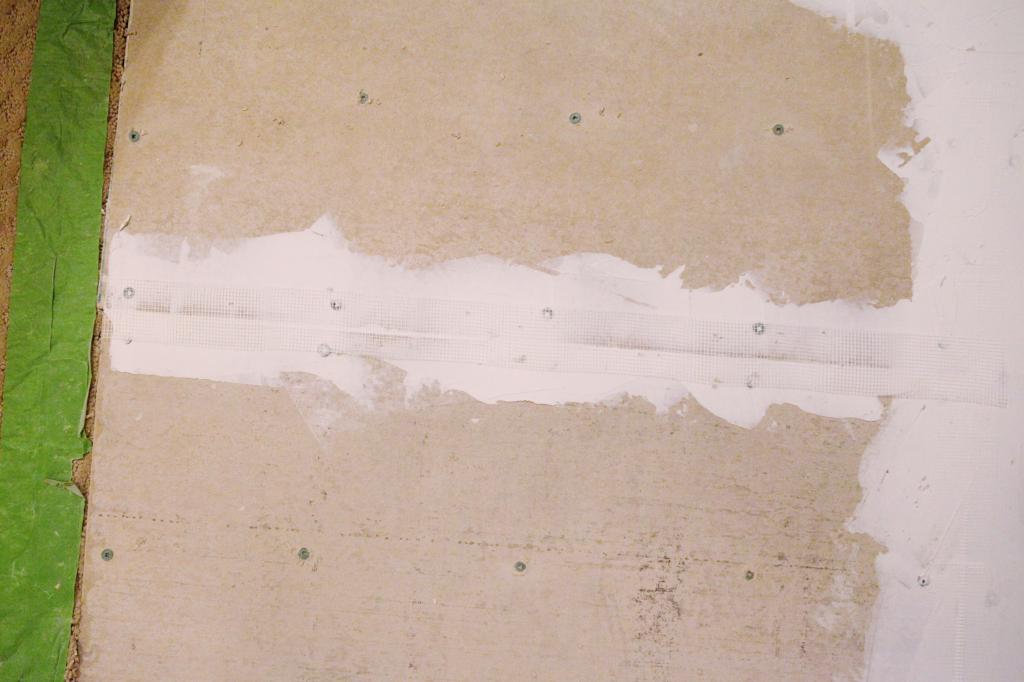 I get nervous and like to double check that it is in place and not squirming around like toddler in church so I use two fingers and rub along the length of the tape just to make sure it’s really stuck in there. This is how it looks from far away. 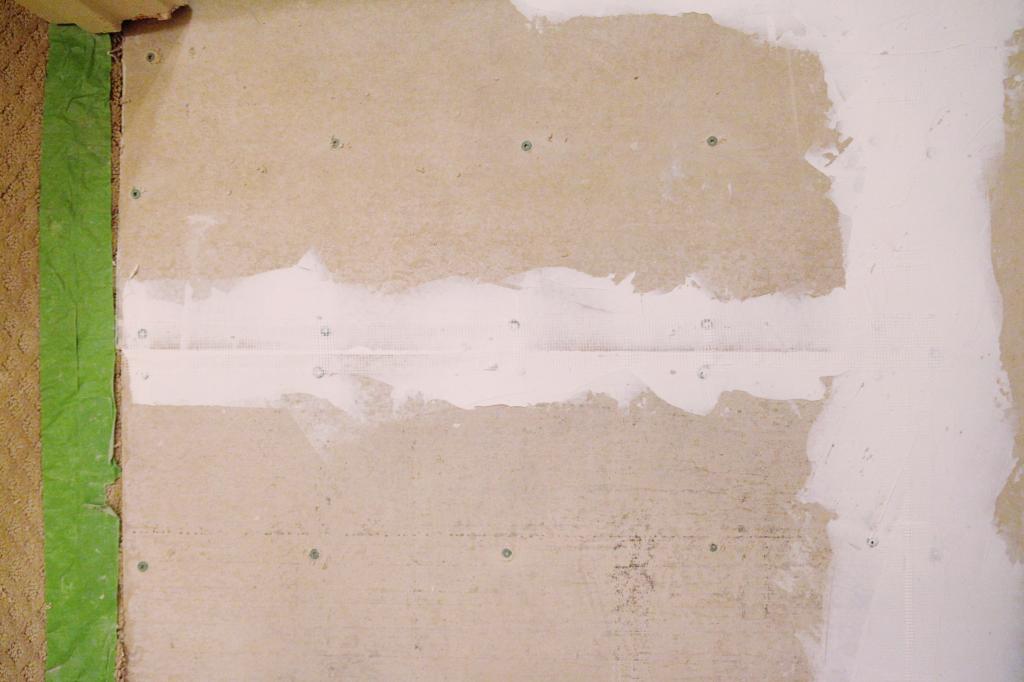 Next you will need another layer of thin set….make sure it’s RIDICULOUSLY thin.  You don’t want mountains to have to tile over in the future! 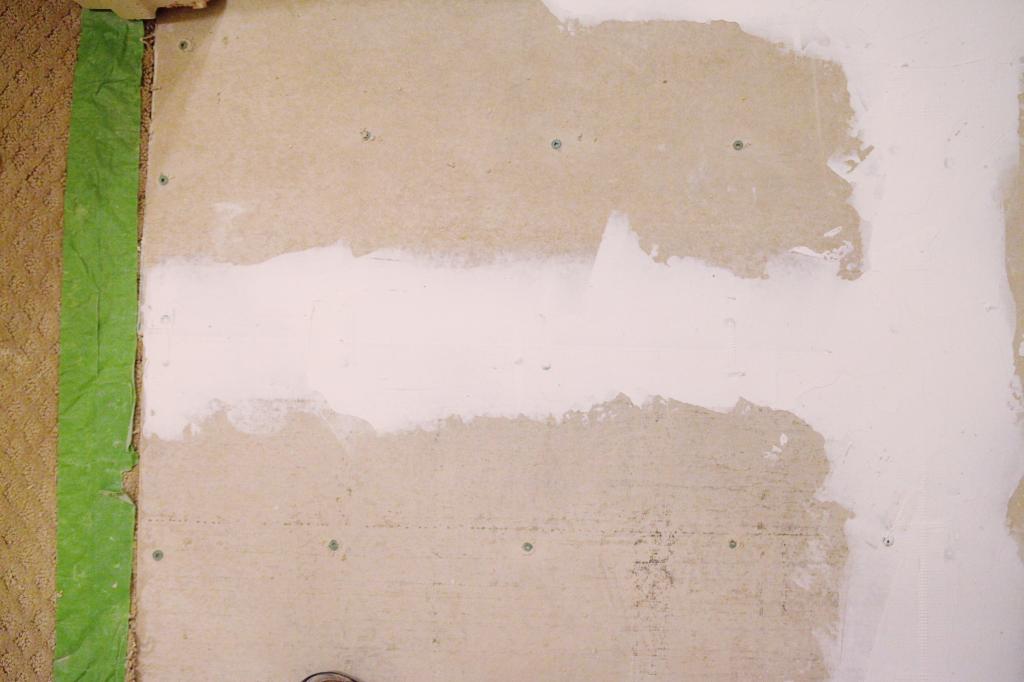 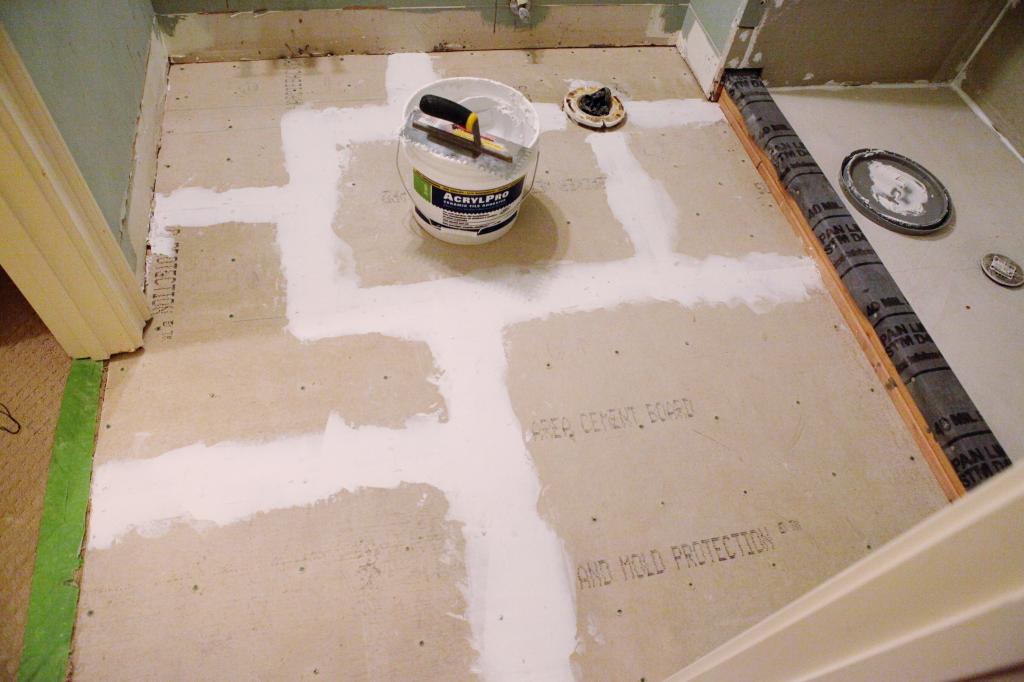 Next up is the shower.  This is where it gets a little hairy.

You want to install your cement board using as big boards as possible.  Don’t use screws too close to the shower pan because you don’t want to puncture your liner….it would be a fatal mistake and then the shower police would come arrest you. You want to make sure there is a little gap in the boards for expansion of the supporting 2x4s so get a little paint stick and use that as your spacer between the boards. 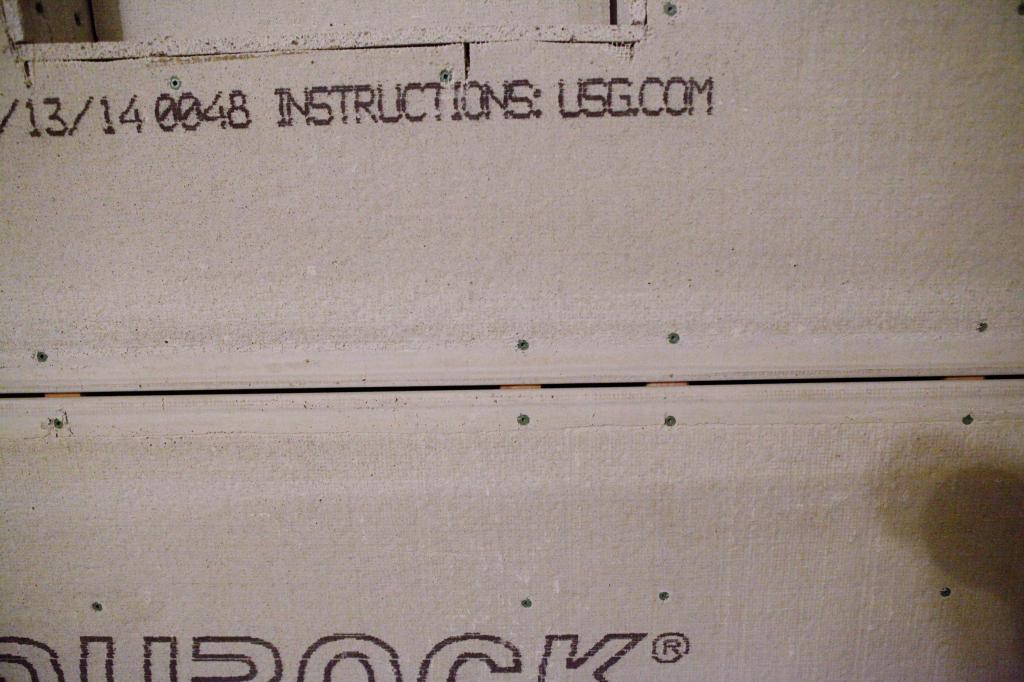 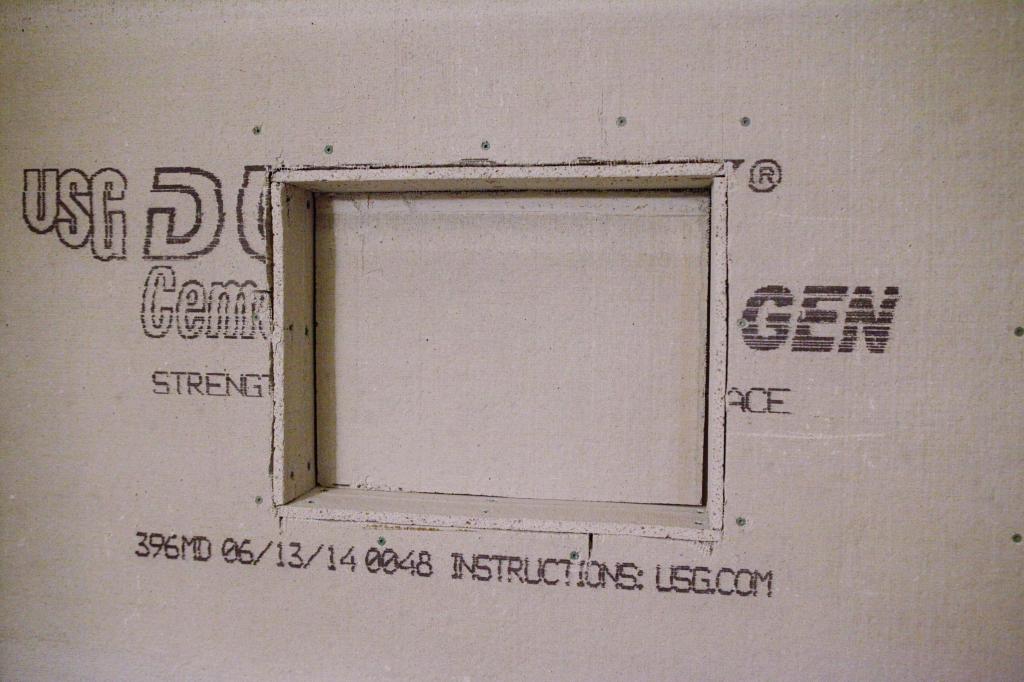 We talked to several handymen who have installed hundreds of these showers and their advice was to use Sikaflex for the skew oles (sorry – auto correct fixed screw holes and I can’t change it because it is too dang funny) and then also the corners. This stuff was REALLY sticky so make sure that you have some paper towels present and wear gloves. 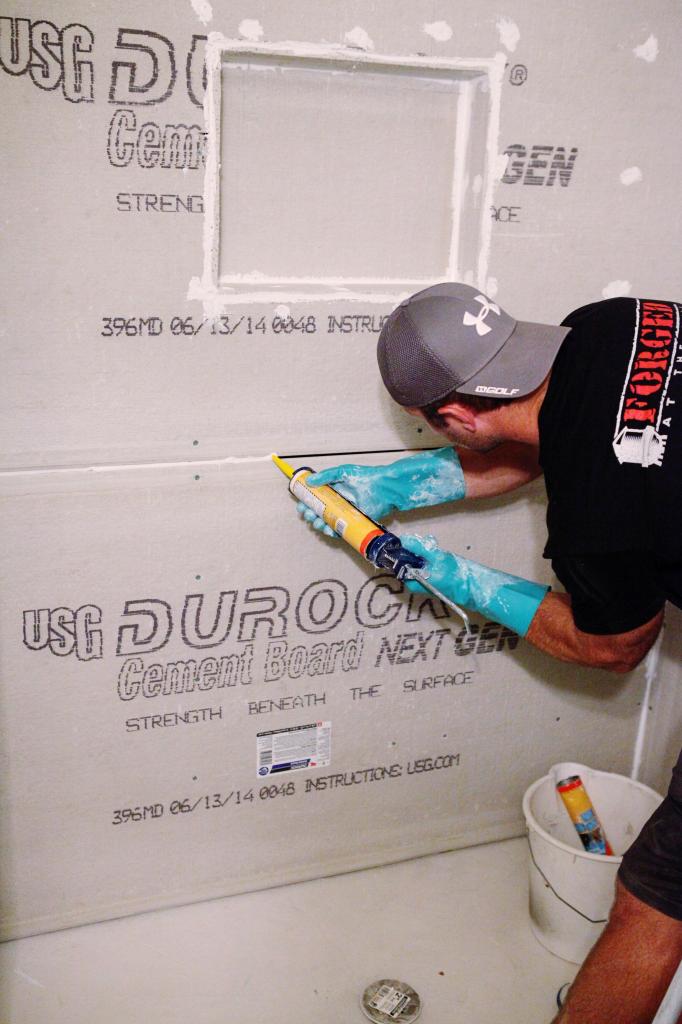 In a ton of forums and videos and instructionals, we heard varied advice….it was really hard to know exactly what is the right way to do this process.  In the end, we did the STUDS then the CEMENT BOARD then the WATERPROOFING then the tile.  This SilkaFlex is a beginning step in the waterproofing stage.  You don’t want to layer one waterproofing over another (like studs, waterproofing, cement board, waterproofing) because that is what they call a “mold sandwich”.  Not good. 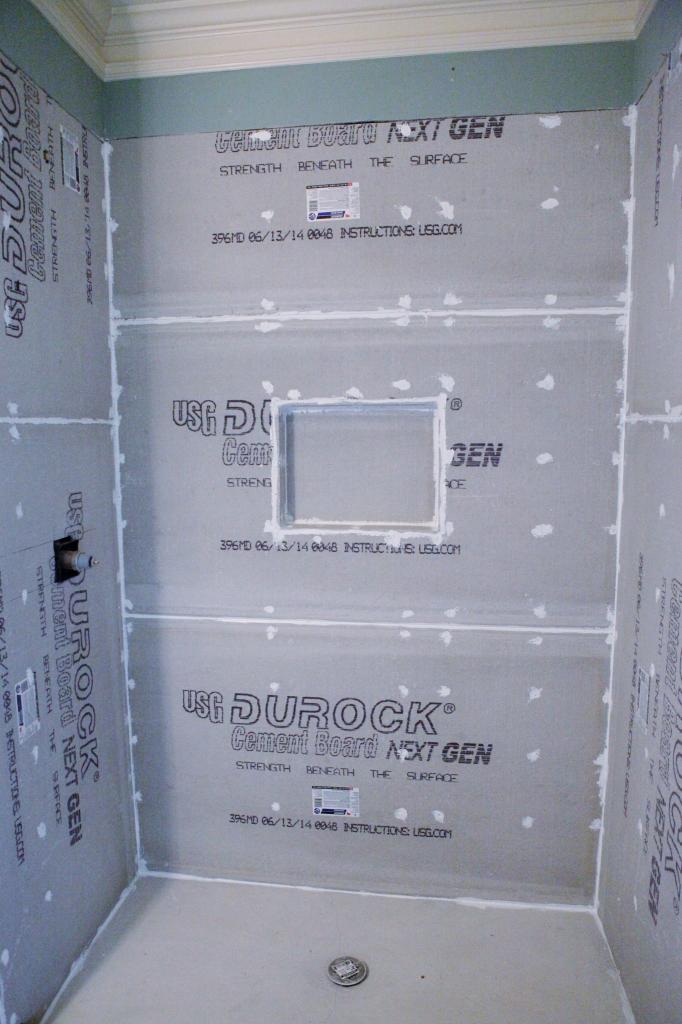 Then what do we do to make two pieces of cement board like one giant one?  You know the answer to this….. Yup, you have to tape those seams.  Cut to length and smoosh her in…. 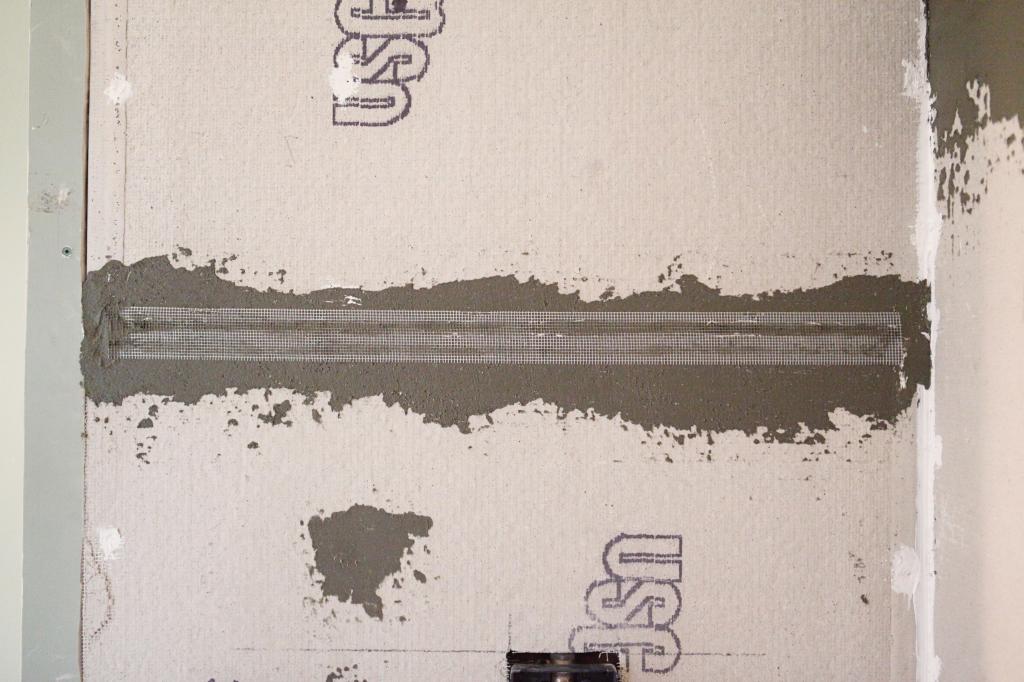 Make sure you mortar over to get a good smooth surface.  It’s RIDICULOUSLY vital to make sure you don’t use too much mortar because you need a flat and plumb surface for that future tile.  Otherwise you will be dealing with mountain peaks when you go to put your tile on. And here is where I did a major blog fail….I didn’t do pictures of the curb.  I know.  I looked and looked and thought I had some but I guess I was too busy doing and not photographing.  I did get this one after shot when it was all dry.  Basically you make a little wire lath form to fit over it and then you use the deck mortar to pack mud on the wire.  It’s not a hard process…kinda like playing with a form of playdoh….you just want it to be square and the top to have a slight slant IN toward the shower.   If you are a step-by-step person, here is the process I followed. I’m gonna have to show you how I did the niche in the next post because this thing is getting crazy long….but don’t worry, I will also show you how we waterproofed this bad boy.

Now about those DIY blog hard hitters….anybody know of any?  Preferably ones that are not contractors or forums or anybody that is anti-pork….because ya know…those kind can’t be trusted 🙂 I’d love to add some to my list….