I think every day we’ve had something batty to go to or do or host.  Not that I am complaining.  I mean, I have a full spooky-inspired cookie cake sitting on my countertop right now waiting for me to break down and eat it.  Thankfully I have a whole bowl of mixed mini candy bars to keep me distracted because otherwise that puppy would be smashed like a zombie head on The Walking Dead.

This past weekend we hosted a Halloween party.  This was not my idea.  Two of the girls in my church women’s group decided that I was hosting a couple’s costume party.  Good friends do that…give you that extra shove.  I’m glad too because it was a lot of fun…I mean, c’mon, there were strobe lights 🙂 I whipped up the invitations last minute because we had already talked about it and set the time and place (those of us with kids need sufficient time to nail down a babysitter!) and the decorations were the same…last. dang. minute. Oh yeah.  We had a fog machine.  I’m pretty sure that if it didn’t make me choke, I would put it in our bedroom for reenactments of Tales of the Crypt.  I’m not the best waker-upper.

Here’s a photo a little less foggy.  All the decorations I had on hand already (my paper spiders from last year, black candlesticks, sticks from the back yard) but the only thing I whipped up were the easy headstones.  I can show you a tutorial on those later. The food was an assortment because everyone was supposed to bring a dish to share.  Thankfully we didn’t have doubles of anything and it was ALL delish.  I provided the little mummies (pigs in a blanket…but to be honest, some of those mummies looked like baby jesus), the chips and dip, candy and the veggies with dip.  I love the long carrot ‘fingers’ in the ranch dip…it’s just weird enough to make it look Halloweeny but not being gross (aka kitty litter cake).  We also provided the non-“toxic” beverages 🙂 As far as the table décor goes, I wanted to keep it as simple as possible but still be able to reuse the items later.  I hate just having decorations for one year and then feeling like they can’t translate into other areas.  In this case, I am gonna move my headstones to the front yard for Halloween night.  To me, nothing is scarier than real stuff….zombies don’t freak me out but a nest full of spiders will give me the heebie-jeebies for weeks. We also created a photo area with this wall.  It’s actually pulling double duty because it is also hiding all the junk that I have been collecting for our next yard sale.  It is a hot mess behind that wall.  Speaking of wall…do you remember me talking about how we created a ‘pen’ for Will’s first barn yard party?  And then my sister got married on a cool platform?  And then I shared some photos of Weston with a planked background?  Yup.  All the same wood that I made Jeremy pull out of the dumpster.  And now it is hiding the stuff that probably needs to be in a dumpster.  That my friends is called irony. Oh we also made a little drink table for beverages.  Sometimes (by that I mean all the time) we run out of room for the food and the drinks need to go somewhere else.  This was it.  I made the little crosses out of spare wood and the felt like this was another part of the scary graveyard.  And I borrowed another candlestick and my vase of black skulls from the upstairs table display. The last bit of decorating we did in the bathroom.  The basement bathroom is fully tiled and has three different types of lights (one light fixture over the sink, one recessed light in the room, and one light/fan over the shower) so Jeremy switched out two of the three with black lights (a little FYI, don’t buy the crappy cheap black lights they sell around this time for $1.50….they aren’t gonna make anything glow.  In fact, they just shed purple light.  We found some good ones in the home & garden section of Walmart that cost around $5 each and they were the best buy).  I used a glowing pen that I had in my Halloween stash to write messages on the wall. But by far the absolute best part was seeing friends in costume.  I think it shows a lot about people when you see what they dress up as.  My favorite was Gumby and Dr. Love.  You’ll know when you see them. 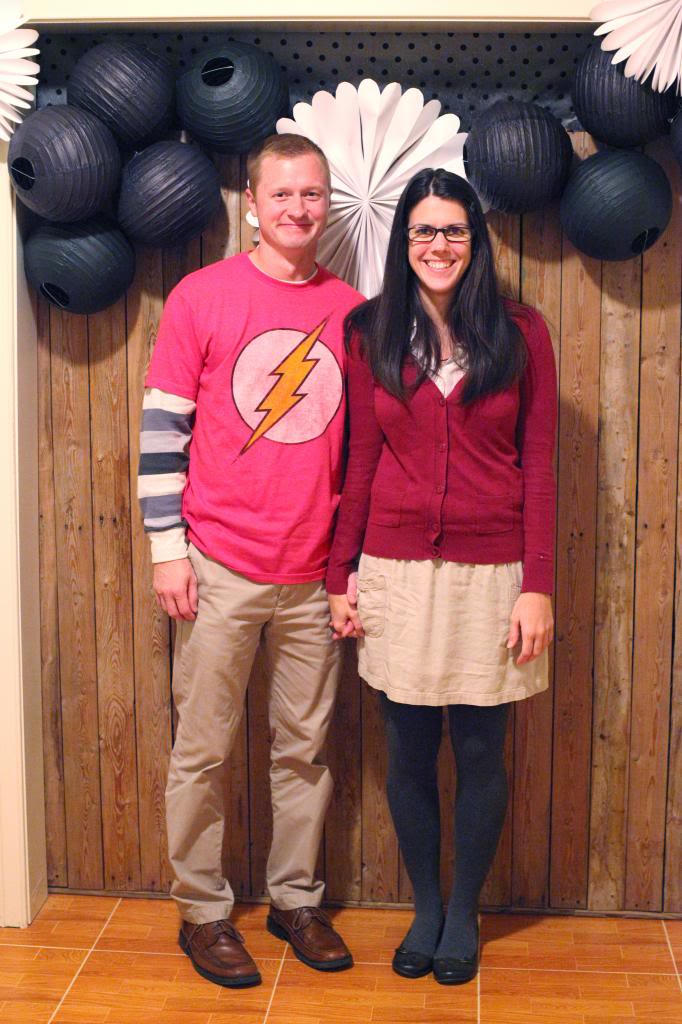 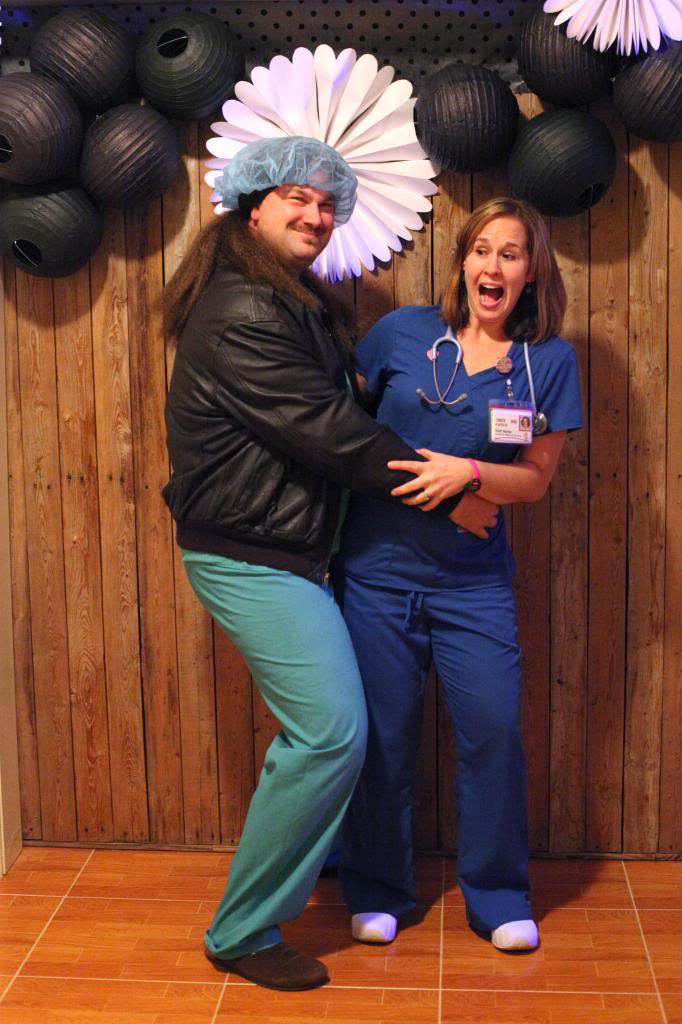 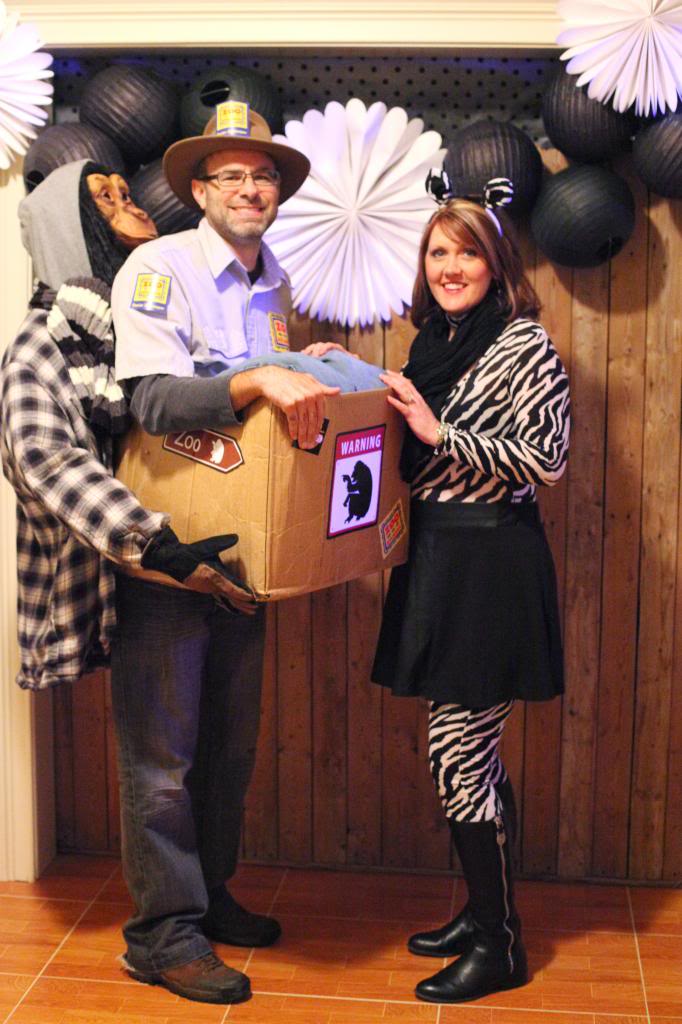 Jeremy and I decided that we would continue our running theme of Star Wars costumes.  I already had the Darth Vader voice-changing helmet (I asked for it for Christmas last year…yes, I am weird) and Jeremy got the storm trooper costume online.  Oh and let me just say that later on, we did a little dancing (ok a lot of it) and I am now never going to be able to dance again without a cape and a light saber.  It was awesome.  Don’t invite me to your wedding. I have no idea what Jeremy was doing.  He couldn’t find his gun at this point.  It felt very awkward apparently…so he busted out the robot.

All in all, it was such a fun time.  Everything from eating to roasting marshmallows (oh yeah, there was a bonfire too!) to seeing a fox in our yard (scary) to dancing to just acting like we were kids in costume again…it was an eerily good time. Also, had to throw this photo in there for effect…..ooooohhhhhh!